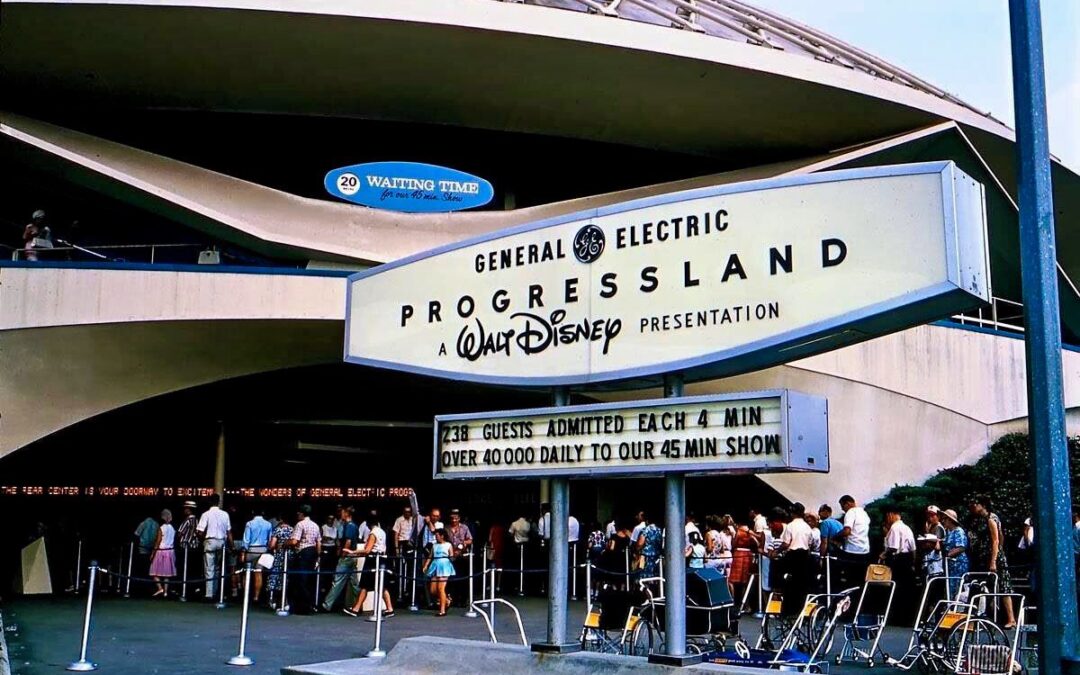 Lately I’ve been thinking a lot about the 1964-65 New York World’s Fair, which I had the opportunity to visit twice. When it opened, I was just shy of my 8th birthday—the perfect age to appreciate the exhibits, it seems to me, in that I was old enough to comprehend the concepts on display but young enough to be awestruck.

Thankfully, I still have my family’s original copy of the official guidebook, which I occasionally pick up when I have the impulse to walk down memory lane. Reading through it the other day, I was reminded of the richness and diversity of the Fair, which cost a mere $2 for adults and $1 for children.

Once inside, visitors could enter most of the exhibits for no additional charge. Among those that stand out most vividly in my mind’s eye are the Vatican Pavilion, which featured, on loan, Michelangelo’s Pieta, and the Ford Rotunda, which visitors toured in automatically operated Ford convertibles. (My dad let me sit in the driver’s seat!) “The Dawn-of-Life” section showcased huge dinosaurs in combat, followed by life-size cavemen “in a triumph of electronic animation.” I also remember the Equitable Life’s “Demograph”: “a gigantic mechanical marvel,” as the guidebook puts it, showing the real-time increase in the U.S. population, which back then was approximately 196 million.

There were shows as well, including a standup routine by Soupy Sales, who hosted a kids TV program that I loved (after the show I got him to autograph of picture for me), and a performance by the cast of West Side Story, which was enjoying a Broadway revival at the time. I remember liking the music and dancing, although what impressed me most was an explanation of how they shed fake blood during fight scenes.

In spite of this variety, the Fair conveyed one overriding message: the future will be spectacular, thanks to technology and humankind’s infinite capacity for innovation. Many of the exhibit halls—including General Electric’s “Progressland”—contained variations on “the world of tomorrow.” For me it was as if The Jetsons—which had premiered two years earlier—was on the verge of becoming a reality.

Among the predictions was that videophones, which were demonstrated at the Fair, would someday become commonplace.

TWENTY YEARS later, after a Mets game at Shea Stadium, my friend John and I headed across the subway platform, grabbed a six-pack at a local deli, and ambled over to the old Fair grounds where we sat under the Unisphere to drink and reminisce. We were glad that the city had preserved this impressive structure, but struck by how badly the rest of the park had fallen into disrepair. The ground was strewn with broken glass, and the concrete base of the monument was covered with graffiti.

The days of wonder that we had both experienced at the Fair as kids seemed to be part of another lifetime, but we remembered them fondly—especially that prediction about videophones, which now made us laugh.

“They sure got that wrong,” John remarked.

In spite of the decay, I loved New York City in those days, every bit as much as I had a very young child, when I first laid eyes on the Empire State Building and stood flat against the wall, staring skyward. In some ways I loved it even more, since I was now a young adult, able to enjoy its jazz clubs, bars, concert halls, museums, parks and streetscapes on my own. Nothing about the city in the early ‘80s seemed to fulfill the World’s Fair’s promise of “Progressland”—but that was OK by me. The surviving landmarks of the city’s great history—from Carnegie Hall, to The White Horse Tavern, which dated back to 1880—were far more important to me than futuristic fantasies of videophones and the like.

Little did I know how much would change over the next 30 years.

For many New Yorkers, changes in the city were welcome indeed. By the late 1990s, the crime rate had dropped precipitously, the graffiti was disappearing from the subways, and Times Square—once a hub of Triple-X theaters, prostitutes and drug dealers—was well on its way to becoming the mecca of spiffy corporate superstores that it is today.

Meanwhile, many of the miraculous technological advances that had been predicted at the World’s Fair were finally coming into their own.

At the Fair, the National Cash Registered Pavilion had showcased a computer that, while hidden away in a large room of its own, could, when asked by visitors, “dig out any recipe in the Hilton International Cookbook, tell the important events that happened on any date of the year,” and answer “in laymen’s terms, any of 100 scientific questions.” Today, needless to say, this seems impossibly quaint, as we have come to take for granted computers that fit into our pockets, and the fact that Google can answer within seconds virtually any question about any subject.

Today, moreover, I now laugh about the fact that my friend John and I scoffed, back in ’85, at the prediction of videophones for everyday use.

WELCOME TO PROGRESSLAND. The question is, are we better off as a result of this “progress”?

One feature of “Progressland,” technologies aside, is the complete takeover of mega-corporations. The writing was on the wall at the World’s Fair, given that all of the major exhibition halls bore the names of corporations. But at the time, they didn’t dominate American culture to the degree that they do today. In New York City, as in cities across the land, independent businesses still thrived. Today, many of the bars, clubs and shops that once gave the city character have been replaced by cell phone stores, Citibank branches and chain drugstores.

The rapid advances in technology that have transformed our personal lives go hand in hand with this, since they are driven by mega-corporations—not only those headquartered in Silicon Valley, but corporations of every kind. Our addiction to smart phones, for example, is not simply a matter of the core technology that made them possible but also the corporate marketing techniques that keep us fixed to our screens for an ever-increasing number of hours per day.

Covid-19 has accelerated this “progress,” in that during our isolation most people have inevitably turned more attention to Zoom chats and the like.

In my own field of higher education, the effects are especially pronounced. Come fall, I may, for the first time in my 12 years of teaching, never meet a single student face to face.

I suppose online teaching is better than nothing. After all, if our recent technologies had never come to fruition, we might have to suspend formal education entirely. I’m not a died-in-the-wool Luddite. I recognize the advantages of technological advancement.

Still, I can’t help thinking about what we’ve lost along the way. One is a degree of mental serenity. Over the course of the few hours that I tinkered with this essay, I never once looked at my iPhone. There’s not much I could have done with it anyway, other than make a traditional phone call or send a text, since it’s an iPhone 6, which is so “ancient” by 2020 standards that it won’t even accept new apps. Moreover, the single source I used to check various facts was not Google but a 56-year-old guidebook. I’ll admit that I am writing this in Word, but I could have done so almost as easily on my mother’s old manual Royal typewriter, which I still have. There’s something comforting about that.

As for my social life, I’ve had various invitations to Zoom Happy Hours, but have routinely rejected them. I’m not sure whether that’s because the technology is still pretty wonky (let’s face it, at times it’s comically bad), or because something about it feels awkward to me. I’d much rather just talk on the phone.

I’m well aware that these observations may be dismissed as expressions of a grumpy old man. There’s a segment of our population that seems to believe any criticism of contemporary culture is automatically invalidated when uttered by someone over the age of 50. I’ll own the fact that some of this is due to my age. But that’s not the whole story. As we become increasingly sucked into the vortex of cyber-culture—and the sanitized corporate culture that drives it—I think it’s important to remain ever vigilant about the effects this is having on us. At any rate, one thing is clear to me: While I still have fond memories of the World’s Fair, “Progressland,” as it turned out, is not all that it was cracked up to be.