John Lewis: A Profile In Courage 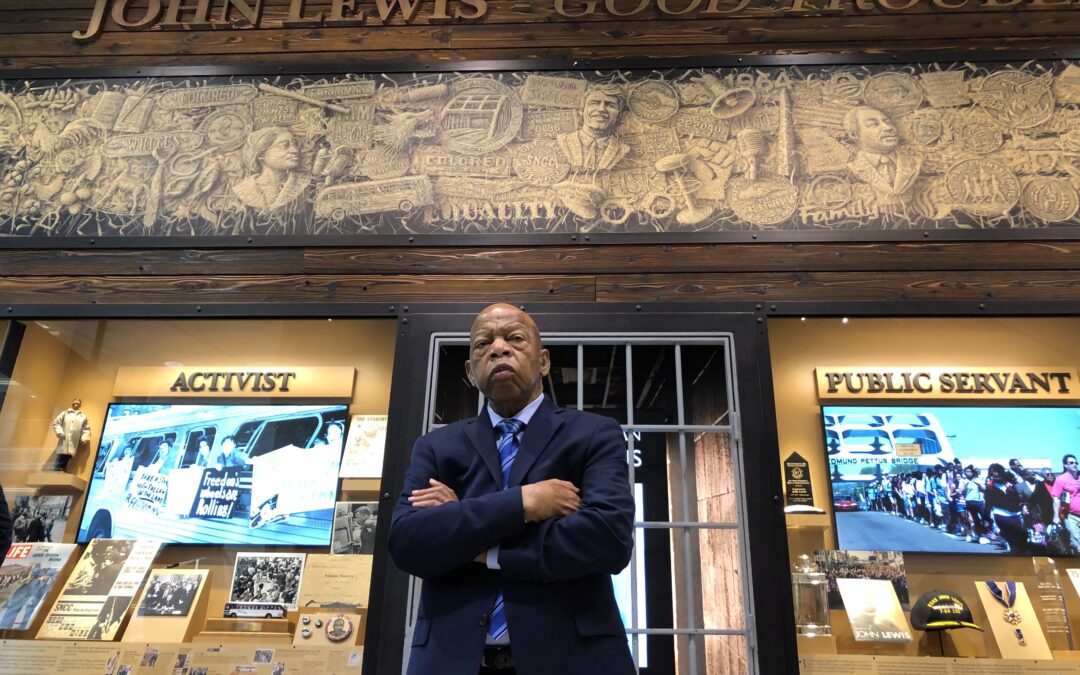 It is a good time to reflect on the civil rights era of the sixties and re-learn the effective strategies used by protest organizers and leaders. America has long memorialized the life and work of Martin Luther King. And yet there were other leaders who marched with King and who would live on to continue the struggle for justice and equality for all peoples until this very day. John Lewis is a shining example of a man of truth and integrity who has deservedly earned his recognition as a Congressman from Georgia for over 33 years.

Throughout his career, Lewis has spearheaded legislative action for African Americans on the important issues of our time – civil rights, voting rights, gun control, health-care reform and immigration. His political leadership continues with the passage of the Voting Rights Advancement Act last year by the House to override the 2013 Supreme Court ruling that struck down the protections of the 1965 Voters Rights Act.

The important life work of John Lewis may not be as familiar as other civil rights leaders from the sixties. And as he entered his 80th year and struggled with pancreatic cancer (his death was announced Saturday, July 18), he is long overdue a high-profile biographic film. The life of John Lewis has previously been chronicled by noted Norfolk author Mike D’Orso who co-wrote Lewis’ 1999 award-winning memoir, Walking with the Wind: A Memoir of the Movement.

And now filmmaker Dawn Porter has documented the life and career of John Lewis. Her new film, John Lewis: Good Trouble follows Lewis from his childhood as the son of a poor Alabama sharecropper who grew up in a large loving family. Lewis recounts in his own words his initial meeting with MLK in 1957 while he was just a teenager, his early activism as one of the original “Freedom Riders”, and his efforts as an organizer of 1964’s “Freedom Summer” to register African American voters across the South.

Lewis has been arrested dozens of times for his  activism and non-violent civil disobedience. “I didn’t want to get killed, but as a Freedom Rider fighting for lunch-counter integration in 1961, I came to the conclusion that this may be the price that I have to pay to a people and our movement, to move this nation closer to a society based on justice that values the dignity and the worth of every human being. We had to do what we could to redeem the soul of America.”

Along with previously unseen archival material, Good Trouble contains new testimonials from such progressive political leaders as Congresswomen Alexandria Ocasio-Cortez, Rashida Tlaib, and Ilhan Omar, along with Congressmen James Clyburn, the late Elijah Cummings, Stacey Abrams of Georgia, Senator Cory Booker, and Presidents Jimmy Carter and Bill Clinton. They are united in their recognition of John Lewis as “the conscience of Congress”.

The timing of this documentary could not be better. More than just a tribute to a national leader, it’s a call to action. The prejudice that led to the police killings of George Floyd and so many other Black Americans might have been avoided if policymakers had listened to the pleas for socioeconomic equality made by civil rights leaders like John Lewis. Tragically, politicians in both parties blamed poor black people for their own poverty, family breakdown, and crime that they suffered in the segregated inner cities, ignoring the oppression of institutionalized racism. The government defunded social and welfare programs, and invested in the deployment of militarized police forces to execute their War On Drugs. An unjust court system incarcerated millions of blacks within a corrupt bureaucracy of for-profit corporate prisons.

The same demands for equality and a just society are being made today by demonstrators on the streets of cities throughout America. Will the political class finally recognize the root causes of our social unrest – poverty, mass unemployment, failing public schools, dilapidated public housing, inaccessible medical care, and the deterioration of basic public goods and services. These are the festering wounds that America has yet to address.

The new documentary, John Lewis: Good Trouble premiered on July 3rd in Naro’s virtual cinema program. During the theater’s closure we invite you to visit narocinema.com and check out our entire roster of new virtual films. The dates and policies for the reopening of the theater will be announced soon.

Tench Philips is co-owner of Naro Expanded Cinema in Norfolk.