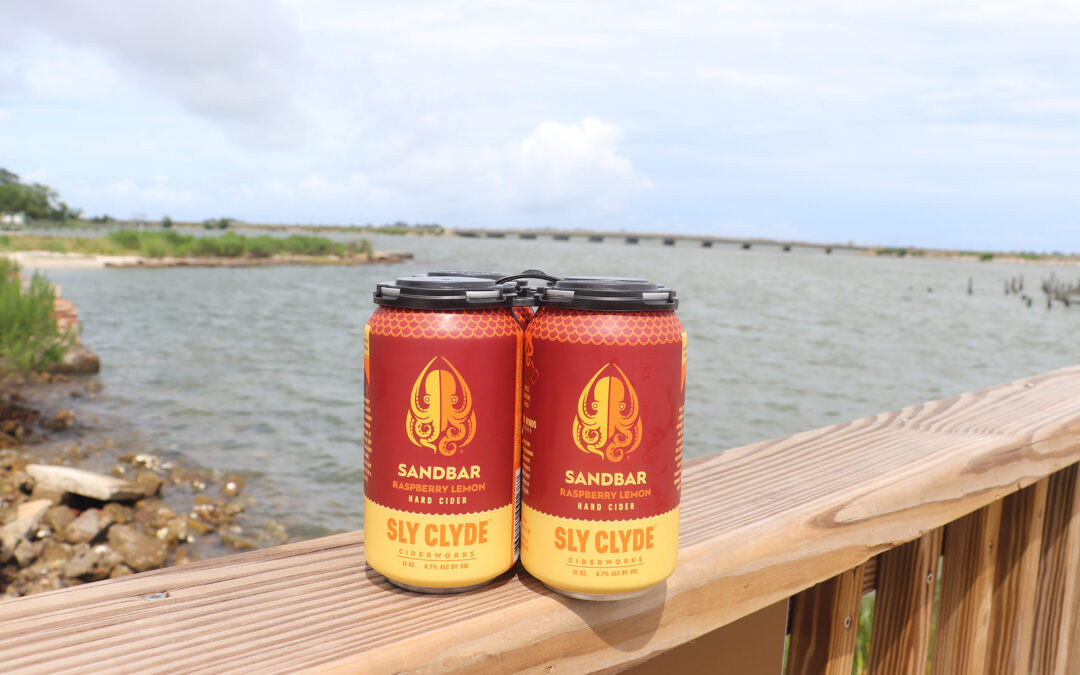 Like craft breweries, Sly Clyde Ciderworks in Hampton has a rotating series of seasonal beverages to compliment its core brands and provide a level of quality enthusiasm for the “what’s new” crowd.

Sandbar, a raspberry lemon hard cider with 6.7% ABV, is the cider-maker’s new release that has fans excited.

To learn more about the latest happenings, I gave Sly Clyde founder Doug Smith a call to learn more. Here’s an excerpt from our conversation.

Sly Clyde Ciderworks has unveiled two new cider brands — Lime of the Ancient Mariner and Sandbar. Can you share some details about these?

We released our Lime of the Ancient Mariner cider back in the spring, but we released it mid-pandemic and so there are still a lot of cans and kegs floating around out there.

It’s a limited release, part of what we call our Tradewinds Series.

We have some amazing, award-winning core ciders in Inkjet and Submersive. We also wanted a rotating series and to make sure that series is fresh every few months we put another one in the mix. For spring it was Lime of the Ancient Mariner, and then we just released Sandbar, our raspberry lemon.

These are perfect hot weather ciders. What was your philosophy in terms of added fruit in creating these two, especially the citrus added (lime and lemon)?

We’re really trying to push the craft beverage sector in Hampton Roads. We’re looking for fruit and botanical profiles that don’t overwhelm people when they drink it, but instead provide the kind of taste layers that make the beverage interesting. It makes you want to talk about what you’re tasting with the people you are with.

We approach cider as a community experience. People are drinking cider with friends and making new friends around cider throughout Hampton Roads.

You have correctly picked up on the citrus profile, and the reason we are using this profile in so many of our ciders is because of the astringent qualities of citrus. We are eager for people to not be overwhelmed with flavors but instead have their palates cleansed with each taste so that when they have the next one it’s fresh and light, particularly in the summer when you want a refreshing beverage.

What is the process for creating recipes and doing test batches at Sly Clyde? How much research and development goes into a cider before it goes to market?

Our R&D process can go anywhere from three months to over a year depending not only on the availability of ingredients but also with the appropriate time to bring a particular style of cider to market.

It wouldn’t make sense to do a raspberry/lemon cider in January. We are constantly looking at innovating and brining new flavor profiles and treatments of apple juice into a product that people really want to drink.

Something that makes Sly Clyde’s unique, I think, is that we want our ciders to be very approachable. We appreciate that there are people around the world whose jobs are to talk about complicated wine. We want our ciders to be interesting and flavorful, but we don’t think you have to have a degree in cider to be able to enjoy them.

That R&D process also involves us making it in-house, getting it to point where we think it’s ready for primetime.

Staff will often get together, try a cider, we’ll tweak it some more. Then, often, it will be brought into the taproom and we’ll do a very short run. If it’s popular like Sandbar we may re-release that cider with some tweaks the following year, which is what we’ve done.

Sandbar is a cider we introduced in the spring last year and we made tweaks and have turned it into one of our core ciders in the taproom for the next few months. It is also packaged in cans, and available for bars and restaurants in kegs.

How did Sly Clyde Ciderworks fair during the early weeks of the pandemic related restrictions and what is your strategy moving forward into the fall season?

We know how hard it has been for bars and restaurants in Hampton Roads because we’ve seen how few kegs have been leaving our warehouse since February. It has just decimated the hospitality and food industry in Hampton Roads.

We have lots of kegs of cider. Fortunately, our cider can last much longer than an IPA 9beer) which begins to degrade after a few weeks. Ciders are very stable.

Hopefully when restaurants continue to come back they’ll put our cider on as one of their taps, particularly since we are the local cider option.

Our taproom did pretty well because we very quickly pivoted to curbside sales. We worked with Virginia ABC, the Virginia Wine Association and Cider Association to make sure everything was legal and that the regulations were adjusted during COVID so that we could do that.

We sold a lot of cider curbside, but let there be no doubt COVID has taken a big hit on the cider industry just as it has on craft beer.

Looking forward to the fall, we are making a lot of intensional contingency plans about what happens if we go back to a Phase 1 situation. We’re being really honest about staff with that. Every step we’re taking has public health in mind.

Where do you stand on producing events on-site like a regional cider festival — even if limiting the number of attendees and enforcing social distancing etc?

We have a Pride event in June. We thought that it would be a massive event this year, but because of COVID we really scaled that down.

We anticipate that there could be some festivals on-site in the future but we think they’ll be scaled-down events and will feel more like relief events than the full-on cider festivals we’ve had in the past where we have other ciders from around the Mid-Atlantic coming in. The reality is that we are not willing to take the risk to have an event that gets shut down after you’ve spent a lot of money ramping it up. Maybe more importantly we don’t think the consumer is ready to take the risk to be out in large events at this stage with national numbers surging. We want everyone knows that when they come to Sly Clyde they can feel safe and enjoy ciders with friends.