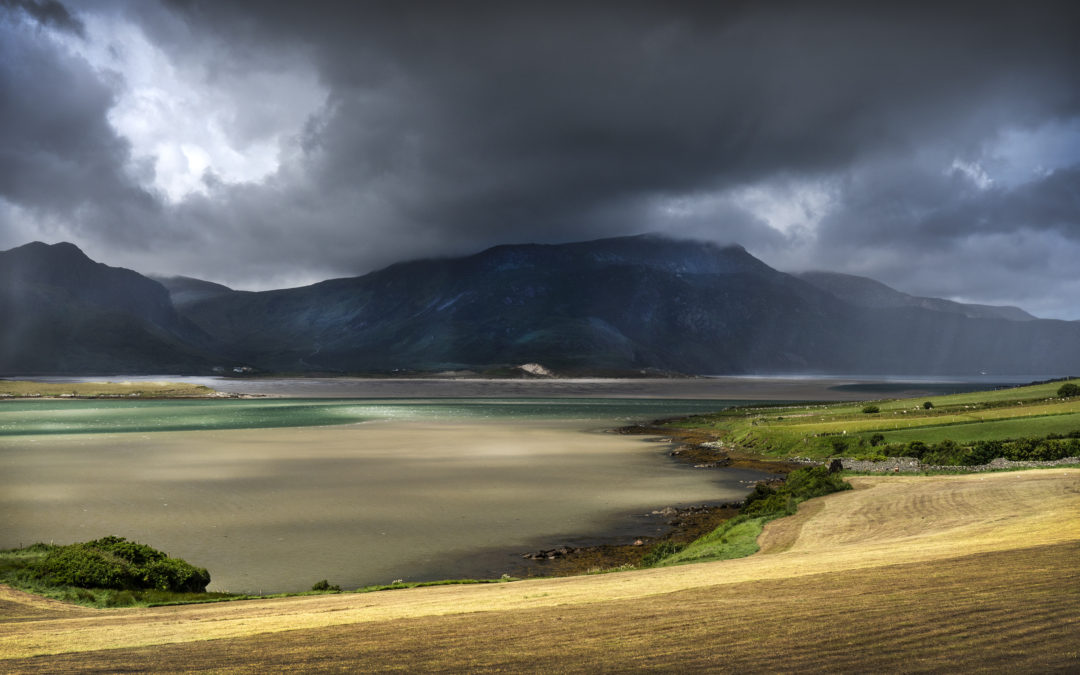 Some 50 captivating images from Norfolk-based photographer Glen McClure were to be exhibited through May 21 at the Sandler Center Art Gallery in a show titled “Apprentice to Light: The West of Ireland by Glen McClure.” The exhibition has been postponed due to COVID-19. Still, McClure’s wonderful new coffee table book by the same title is available for sale via his website, glenmcclure.com.  The dramatically scenic west coast of Ireland, with its friendly people, quaint towns, narrow rural roads, castle ruins, coastal cliffs, pub fare, hills, musicians, and ever changing skies, is all captured brilliantly by Glen in this book.

While McClure’s photographs of Ireland are known to many, this exhibition will — at some point in the future — feature a lot of work he’s not shown before.

I recently caught up with Glen for the following Q&A about the exhibition.

Your Sandler Center gallery exhibition will be titled “Apprentice to Light: The West of Ireland.” For a photographer, what aspects of the dramatic landscape and coastline of Ireland’s west country continue to capture your imagination?

For me, it really is all about “the light.” That’s the first thing I look for. Where is the interesting light, once I figure that out I’ll literally head in that direction and see where it leads. I like to work by the coast a lot. So many interesting things to see there. The sea, rivers, mountains, rocks, shapes, reflections and the amazing Irish skies tend to draw me in. 2019 marked my 20th trip to the West of Ireland and I still find things that interest me there every single day I’m lucky enough to be there.

Ireland’s location in the north Atlantic puts the western coastal country in storm’s way with numerous, ever-changing weather patterns lashing its shores. With this comes rapidly evolving cloud cover. As natural lighting plays an enormous role for landscape photographers, how do you best capture these effects? Do you use tripods? What lenses are preferable?

The first thing you have to do, as my wife Marshall constantly reminds me is, “Let your eyes do the work.” I’m always looking for something to shoot. And in Ireland, when things can change so fast in regards to the weather, you just have to go with it.

Funny you mention tripod’s! After years and years of lugging heavy tripods, especially when I shot film using 4×5 view cameras, then using lighter weight carbon fiber tripods when I went the digital route, I have somewhat abandoned them. The reason? After the third time the wind picked up my tripod, with my camera attached, and threw it over into the rocks, I finally wised up! I “mostly” shoot handheld now a days because of this. But I always have the tripod with me in case I want to do a long exposure say of moving water or shooting at night.

Part of the magic of photography happens in the “dark room,” these days on your computer. What programs do you use to showcase the imagery and highlight the effects you wish to ultimately produce?

I am pretty much like most photographers now a days I guess. I “develop”  my digital  images using Abode Lightroom and then I “interpret” them using Abode Photoshop.

Landscape painters of the 1600s through 20th century produced their interpretations to show a particular mood. What is your approach as a modern photographer with the enhancements of technology?

When I’m on location shooting, there is always something about the scene before me that makes me stop and take a look. It’s almost like that river say’s, hey, not there, over here. So, I shoot lot’s of stuff but many times it’s not until I’m back in my studio that I really figure out what it was that drew me in . A lot of the time, this is the where real work begins. I cut on some beautiful music , get a coffee and get into the zone, trying my best to bring out of the image some kind of deeper meaning. Sometimes this takes a while and I’ll revisit the same image over days, seeing what I could do better. I really enjoy this part and then making the final print in my studio.

When people view your Irish landscape photographs, do you hope the experience will inspire each person to travel to Ireland? Or do you wish for something else?

Many of my images are just not want the Irish Tourist board would want I’m afraid! I love to be out in the middle of the rain, hail, wind. I’m trying hard to capture the atmosphere of Ireland. At least how I see it. The main thing many people comment on to me about this work is the skies. Those ever changing clouds never cease to amaze me.

In addition to landscape, you do portraits of people. In this age of facial recognition and the buying and selling of people’s facial images to tech/security/marketing companies has it become more challenging to get permission from potential subjects?

I do not seem to have a problem with this. I have found when you tell folks this is an art project, more times then not they agree to participate.

What story/stories do you read on the faces of the people from Ireland’s west country?

Is not so much stories I see on their faces but rather what I’m trying to do. Which is show folks with dignity.

What do you want viewers to notice in these portraits?

My experience is many Irish folks are somewhat shy. And quiet. When I have photographed the Saint Patrick’s Day Parade on Achill Island (5 times), I’m trying to show not only the intensity of these performers but also set the scene of the day. The weather can be brutal and if it is, I try and incorporate that into my image.

You’ve also captured random slices of life in small, rural towns. How special are these serendipitous moments to a photographer and your portfolio of Ireland?

These visits are all part of the puzzle. I love nothing better, no matter where I am, then carrying my camera and wandering, just looking. Could be a building shape, or a dog walking down the street.

Beyond the Sandler Gallery, what other exhibitions and projects do (did) you have planned for 2020?

I’m really excited about 2020. We are (were) doing a book launch at the Sandler Center for my new hardcover book, Apprentice to Light: The West of Ireland by Glen McClure. This book was designed by Bart Morris of Morris design. I’m so happy about this book. I am also having my first exhibition in Ireland in June, in the beautiful town of Westport, which has served as my home base for many of my trips to the west. Launching the book there too. That opening will be Friday, June 5. So, I’ll be over for about three weeks and will be shooting again near Westport and then about five days down in the Beara Peninsula region.