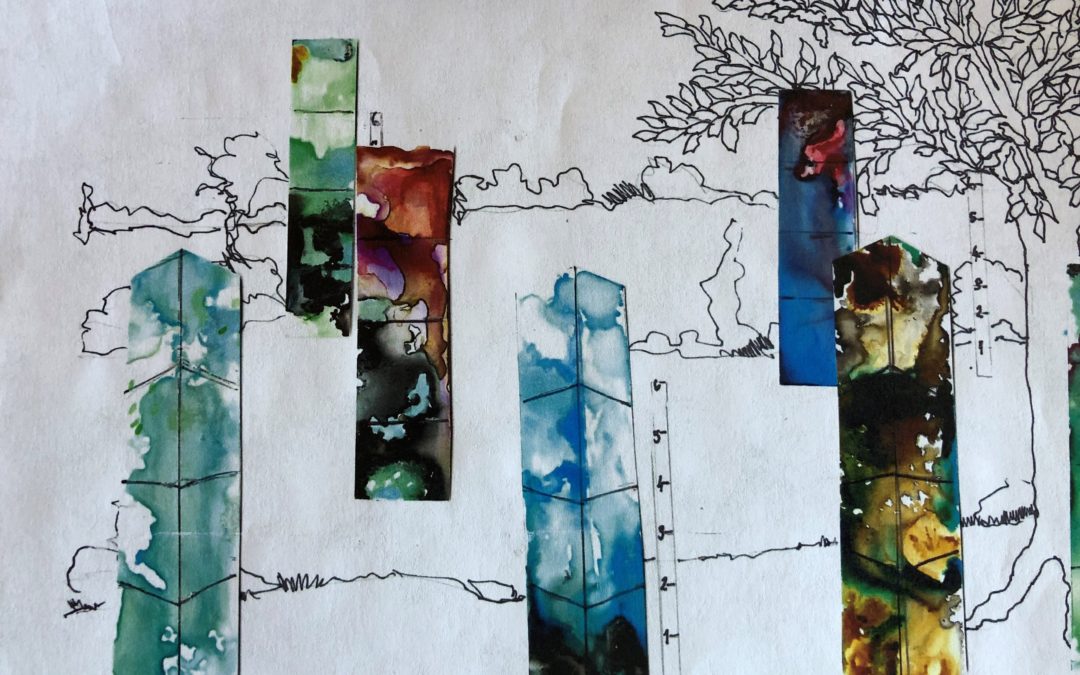 By December 15, 2019, more than 50 artist’s proposals had landed in education and contemporary  art exhibitions curator Carrie Spencer’s inbox.  Via the release of a call for proposals and the hosting of a public forum last August, the Hermitage Museum & Gardens offered artists the opportunity to propose the creation and exhibition of fully-funded new work.  The only stipulation was that the work address the human impact on the environment.

With both indoor and outdoor spaces up for grabs and no restrictions on materials, artists from throughout the region set about planning how to give visual from to sea level rise, climate change, water pollution, and more.  This project afforded artists the opportunity to work in new ways, with new materials, and with new collaborators.  As just one example, it afforded artists Karen and Alexander Rudd, a mother-son duo, the long dreamt of chance to combine creative forces.

On Friday, February 28, the Museum released the names of the Rudds and the other 18 artists—eight individuals, three pairs, and two three-person teams—who have been awarded coveted slots for their largely sculptural and installation-based work, about half of it site-specific.  Fifteen of the artists hail from Norfolk, a city that has been called “ground-zero” for sea level rise.  Some experts place Norfolk—including the Hermitage Museum & Gardens—under water by the year 2021.  The remaining roster includes artists from Centreville, Richmond, and Wake Forest, NC.

With a full analysis and interpretation of Unknown Outcome on tap for the June issue of VEER, this preview serves only as a teaser of what is to come:

For Atlantis Project, Sheila Giolitti will place four 2 x 2 x8’ plexiglass columns at intervals in the landscape punctuated with flood water depth indicators.  Together, they will represent conditions facing our seas today.  Pigments floating in bonding agents sandwiched between the layers of plexiglass will evoke beautiful clean bodies of water teeming with life to dead areas suffocated by pollution and oil spills.

In Certainty, Rayn Singree will project a blue light that will slowly rise across plexiglass panels etched with full-scale figures viewed from the back as a metaphor for climate change naysayers who ignore the encroachment of the sea.

Growing Concern, the brainchild of Karen and Alexander Rudd, highlights the issue of single use plastic through their 100-foot flowering vine made of compostable bags illuminated with LED lighting.  The bags will be composted at the show’s completion and, during the run of the show, the Rudds will personally visit all grocery stores in Norfolk with an appeal to switch to compostable bags. 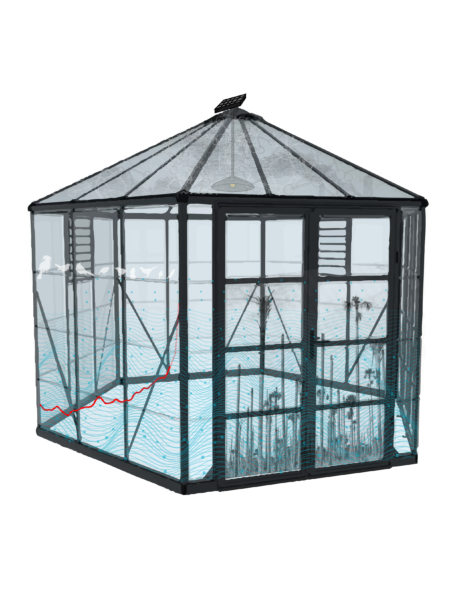 Hothouse (pictured above), by Brendan Baylor, Kelly Morse, and Natalia Pilato, will feature a greenhouse made of transparent printed panels that brings together school-based programs, responses to written prompts, a mobile print set-up, and vines that “grow” throughout the greenhouse during the run of the show.

In Listen to Big Data, Yuxiang Dong plans to layer audio recordings of white noise generated by data centers, where huge data sets are analyzed for patterns, trends, and associations, and present them at a sound station.

Museum Tree, the creation of Jean Benvenuto and Luke Stone, will whimsically posit that art, represented by frames and vitrines suspended from the branches of said tree, will have to be elevated when the waters rise.

And Lindsay Horne’s collage of side view mirrors will reflect a neon sign on the opposite wall that reads “The End” backwards.

Conceived, but not yet realized, the six indoor and seven outdoor projects offer artists, audience, and museum staff the opportunity to dig deep, dream big, take risks, and problem-solve their ideas into existence.  This rare prospect has been made possible, in part, by a two-year grant from the Elizabeth Firestone Graham Foundation with the additional largess of Hermitage supporters.

A “splashy” evening reception will open the exhibition on June 5 followed by panel discussions, artist’s talks, films, documentaries, and free community days offered during the run of the show.  In terms of the exhibition and its ancillary programming, Unknown Outcome appears to be the innovative and ambitious embodiment of the Hermitage’s stated mission of preservation, inspiration, and stewardship both in relation to art and to the natural environment.