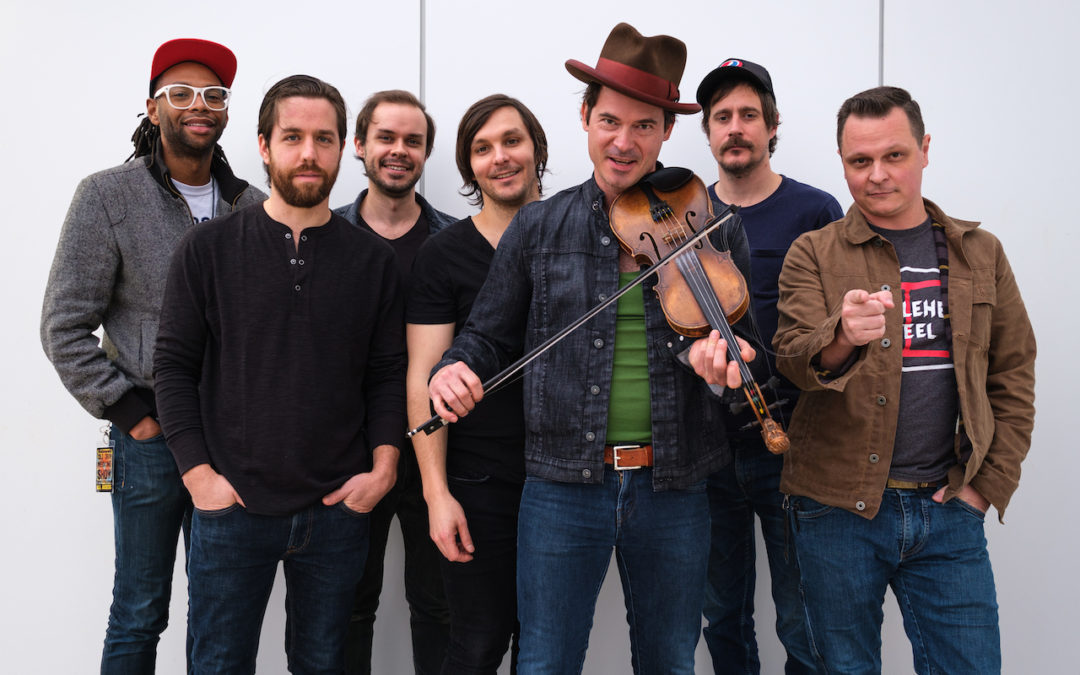 Over the years since Ketch Secor and Critter Fuqua began playing together in the hills of the Shenandoah Mountains and then assembled Old Crow Medicine Show in the hippie sanctuary of Ithaca, New York, partly from buskers on the streets, the band has shuffled players.

The road, in some ways, formed the band. From Ithaca in those early days, they hit the highway, landing in a mountain cabin with no running water in North Carolina, where they busked on the streets. Their big break came playing on the streets of Charlotte. A woman came up and asked if they’d be playing for a while longer because her dad liked that kind of music.

“It was the fifth of July 1999,” Secor says. “We had been a band for oh, ten months or something, and we could play about 20 old-time tunes pretty good.

The woman went to retrieve a man named Doc Watson. “We played one for him and he liked it. He listened like he was drinking it in,” Secor adds. “So after we played, it was really quiet before Doc finally spoke and he said it sounded really great and he had a gig for us.”

The gig was MerleFest and that earned them more gigs in Nashville and elsewhere. An album deal followed and, presto, after a lot of work, they had a career. Their ninth album, “Remedy,” released in 2014, won the Grammy Award for Best Folk Album

Now, the road is shaping the band again, prompting changes in the core. Fuqua departed again earlier this year, tired of the grind.

Rather than seeing that departure to be a challenge as they have in the past, Cory Younts, the group’s mandolinist and keyboardist, says it’s an opportunity. He knows about leaving and coming back. With the band’s blessing, he took a break in 2012 to tour with Jack White’s band. Watson had left, the first founding member to depart. Secor, Younts said, had become a father and wasn’t sure he wanted to continue touring.

“We were younger, it was, you know, a little more scary. Can we continue this band if one member leaves? We hadn’t found Chance McCoy yet, the next guitarist,” he says, recalling the discussion about whether to join White. “They were like, ‘Yeah, dude, absolutely. Go for it and come back when you’re done.’ And it was great. You know, I kept in touch with them. When I came back. I flew all the way home from Australia with Jack. By the time I got to Nashville, it was in the evening and Old Crow was doing a show at the Ryman. I went straight to it and played. I had barely slept.”

Now, he realizes that bands are organic. He took a trip with Andrews in November to the Allman brothers’ house in Macon, Georgia, that provided a much-needed perspective. “There’s a wall there that has about 50 people that were all in the Allman Brothers at one time,” he says. “I took a picture of it and I brought it back and I was telling everybody about it. Sometimes fans are really freaked out and they don’t know what’s going on. Sometimes we’re not the best about announcing things, but we’re trying to get better at that. People are still asking where’s Willie and where’s Gil and they’ll probably do that forever. That’s fine. People have their favorite members or favorite songs by those by those members. But the whole Allman Brothers thing kind of lifted everybody for a minute. It really did.

“It was like, look at these guys, look how long they lasted, and look how many people were in their band. It kind of lifted our spirits.”

The new lineup also offers an opportunity for the band to explore new directions. “We’re not the same string band from 2003 and the music is changing,” he says. “We’re trying to evolve. We’re getting older and we have gotten a little bit more into a Southern Rock sound and some of these new players and are much more well skilled at playing that.”

That doesn’t mean they can’t bring the old-time music that Secor and Fuqua immersed themselves in while hanging out in Ithaca more than two decades ago.

“We can still do old-time string band,” Younts said. “I don’t feel that it’s something that we’re trying to get away from at all. When we’re at DelFest or we’re at MerleFest or any of those bluegrass festivals, I feel very confident we can still keep up with all the young bloods and get it done the right way.”

Their most recent album, “Live at the Ryman” is a chronicle of the band with Fuqua and other departed members pulling from performances at the legendary auditorium between 2013 and 2019 including guest appearances by Margo Price and Molly Tuttle. The album features longtime favorites like “Sixteen Tons,” “Methamphetamine,” “Brushy Mountain Conjugal Trailer,” and, of course, “Wagon Wheel,” the song Secor wrote starting with a snippet of a tune by Bob Dylan on a 1973 bootleg. It went on to become a country chart-topper for Darius Rucker.

The band has played the Ryman for two decades, including ten New Year’s Eve shows.  Rather than pluck one show from the Beacon Theatre in New York or the Wiltern Theatre in Los Angeles, the band decided to go through their Ryman shows. “We had so many different versions of everything,” Younts says. “It just gave us a lot of options to go through and say, let’s listen to this version of ‘Take ‘Em Away.’ Now let’s listen to this one. That’s better. And we’ve had so many guests over the years which is another reason that we wanted to do ‘Live at the Ryman.’ ”

Younts says there were so many good choices that he figures a second volume may arrive if the band doesn’t release a new studio album this year. What are the chances of that? Secor, a star of the Ken Burns documentary on country music, has been in Sewanee writing songs for a Minnie Pearl project, but also, Younts figures, for Old Crow.

The band is closing on an 8,000-square-foot building in East Nashville that will become Old Crow’s headquarters and studio, a project Younts figures will take four years or so.

“As soon as we close,” he says, “I’m sure we plan to start swinging hammers and tearing down drywall. Pretty much anybody that we know in Nashville that’s ever swung a hammer or done any construction in their early 20s is going to come help.”

Plenty of band members have that experience. “I think we all did,” he adds. “None of us really enjoyed it.”

They’re older now, mostly weekend warriors. Gone are the days of two buses and weeks on the road. There are one bus and a trailer. Younts loves the rack on a bus, but the others aren’t as fond. “Everyone has a lot of kids now. We’re just not one of those bands that are going to bring our entire families on the road with us. We did that and what happens is everybody plays dad all day long and then they’re just exhausted by the time they play a show. And they got about 60 percent less after they’ve gone to the park and they’ve gotten ice cream and they’ve done the toy stores. It’s really hard to do both.”

They’ll play a bunch of festivals this summer so their appearance at The NorVa on Feb. 29 is an opportunity to catch them inside.

“That’s pretty much how everybody makes their living now, just festivals,” he says. “Hold on all through the winter. Start doing stuff around March or maybe February and then it’s festival season. It’s great. It’s really fun. There’s music all day and there’s catering.  You run into somebody you know. You go see so and so.  I love the festival season.”