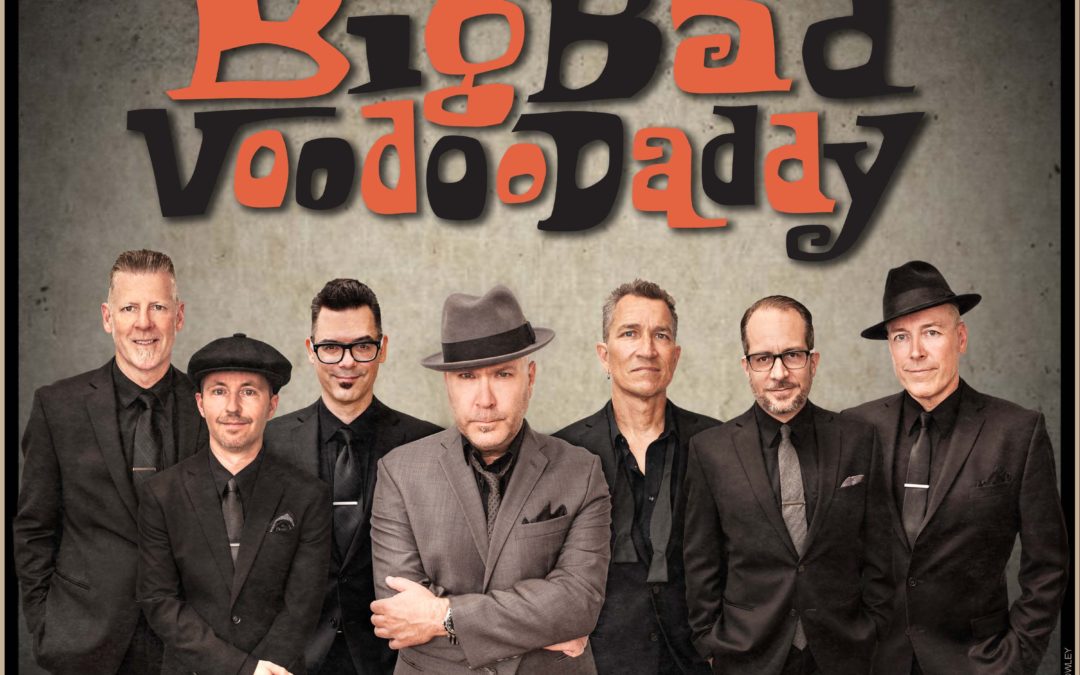 Here’s a trivia question sure to stump even the most diehard music or football fan. Which act joined Stevie Wonder and Gloria Estefan to perform at halftime of the 1999 Super Bowl?

Nope. Not Prince. And fingers off that phone.

The answer is Big Bad Voodoo Daddy, the California swing band now celebrating its 27th year on the road.

“I’m not sure exactly how that happened,” says drummer Kurt Sodergren, a founding member. “It was amazing. We got to play with Stevie Wonder.”

The performance along with the band’s breakout appearance in the 1996 movie, “Swingers” starring Vince Vaughn and Jon Favreau, is a career highlight, but two decades later the group still fills theaters and dancehalls with their horn-fueled fun.

Sodergren and his mates arrive at the Ferguson Center in Newport News on Jan. 17 for their latest appearance in the area. He took the time to talk about their journey from California buddies to pioneers of the swing revival to touring 150 dates a year.

Veer: What do you think has been your enduring appeal?

Sodergren: People do enjoy this style of music.  It seems like it crosses over a lot of generations. But I think it’s also what we bring to it. I think we bring a certain energy and a certain joy to the music that people really, really can relate to. I can’t tell you how many times I do a meet and greet and people talk about how much fun it is that we’re having on stage. And it’s because we are. People really like that. I can’t think of any other reason why we would have stayed together.

Veer: Your most recent album is “Louie, Louie, Louie.” Tell me how that came about.

Sodergren: When we first started playing music, we didn’t have a lot of original material.  But we made a name for ourselves pretty quickly in our hometown and then branched out as soon as possible. It just seemed like this kind of music was perfect for private parties and weddings and things like that. And Scott (Morris, the band’s other founder) was booking a lot of those. But they wanted us to play three 45-minute sets and we didn’t have a lot of original material. So we raided the songbook of Louis Jordan, and Louis Prima and Louis Armstrong. And that kind of also affected the direction that we took.  We love New Orleans jazz and swing and those guys were masters of it. If you want to look at a blueprint of how we cut our teeth, you don’t need to go too much further than that. Believe it or not, there are people who don’t know about those artists. So we just thought, why don’t we just revisit that and do a record of their songs?

Veer: Those guys weren’t exactly household names even 30 years ago. How did you come to that kind of music?

Sodergren:  You know, I think even in some households, you really weren’t allowed to speak their names because it was kind of like the punk rock of the time.

Most everybody in the band had parents who were involved in music. My grandpa played in a big band. So we had a great record collection. Scott grew up playing trumpet in the school band. I just found out Glen’s dad was like the polka king. He played the saxophone. And so Glen was always around that kind of music as well. And the same can be said for Josh and Karl.  This was all part of growing up.

Veer: Tell me the origin story.

Sodergren: In about 1988, Scott and I had a mutual friend who introduced us, who thought that we might get along. We clicked right away enjoying the music, but we were playing a heavier kind of blues roots Americana music at the time. When we formed a trio, we had some phenomenal success doing that, but our bass player ended up not really working out.  Then Scott told me that he wanted to start playing swing which was kind of shocked me because I didn’t have any experience playing swing. I said I heard about this guy (Dirk Shumaker, their upright bass player) in Santa Barbara. Someone had his number and I called it and he was playing acoustic bass on his outgoing answering machine. And so I called Scott and I said, hey, listen to this, he sounds pretty good. And that was his audition. We left him a message and he was in. Andy (Rowley), we had seen him playing baritone sax backing up some other bands. But not jazz. You know, he was playing more like R&B so we got him on board. Another trumpet player played with us for a bit and then we found Glen (“The Kid” Marhevka) and then Glen knew Karl (Hunter, a sax player). I believe they both knew Josh (Levy) from jazz camp or something like that. So everyone was kind of like a phone call away. And as soon as everyone got on board, we got in the van and we just started traveling around and playing.

Veer: Was there a time when you thought we’re going to make it? Did you have day jobs?

Sodergren: I did have a day job. I think most of us did. I remember before “Swingers” came out and we were playing at The Derby (in Hollywood) every Wednesday for like two years and I’d get home really late and make my way to work in the morning. It just got to a point where I couldn’t do both well. So I had to choose one. And I remember talking to Scott about it, you know, like, do you really think that this is going to do something because I didn’t. I mean, I was just in it because it was so much fun. That was never really my goal. I just didn’t think it was possible because I knew the percentage of people who can make it the music business is pretty small. So I was playing because it was a blast. And he said, Yeah, for sure. He was completely 100 percent certain we were gonna make it. I remember being shocked.

Veer: After “Swingers” were you able to quit your day job?

Sodergren: I think it was right around that time. It might have been after we were in the movie, but it hadn’t come out yet. We were starting to branch out. We were playing maybe as far as Texas, leaving on Friday and coming back on like early Monday, getting back into work. When “Swingers” hit, all of a sudden we could play all across the country because people were seeing the movie. That was our social media at the time.

Veer: I looked at recent setlists and it’s a nice mix.

Sodergren: Scott changes it every night, too. It just depends on where we play and who’s going to be there. If it’s a dance party, then it’ll be simpler numbers or if people are sitting, then we might do more ballads.