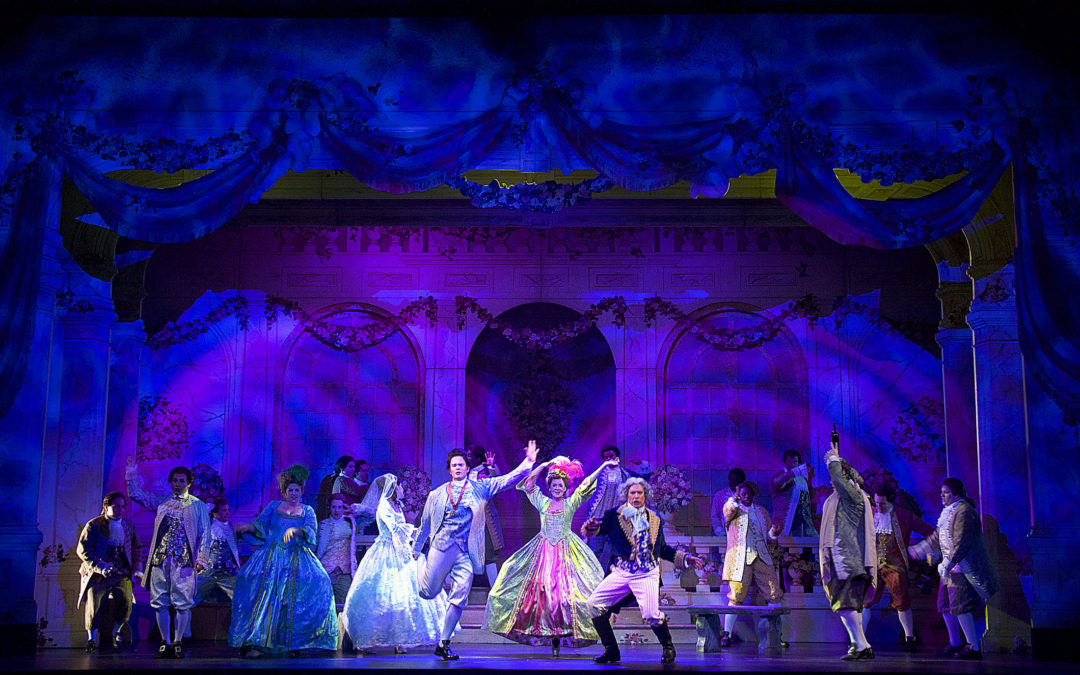 (Cinderella promises to be a visual delight for all ages. Photo by Jimmy Lawlor courtesy of Virginia Opera)

That’s Rossini’s Cinderella, a version of the familiar story that puts the figurative magic of words and good-hearted behavior in place of hocus-pocus stuff. As an extra added attraction, children and adults can meet, talk to and be photographed with the stars of the show at Sunday post-matinee “Tea with Cinderella” events in Norfolk and Richmond.

There’s the usual prince and put-upon young lady in what the VO calls “the ultimate rags to riches tale,” but librettist Jacopo Ferretti gave Angelina (Cinderella) a stepdad (who’s a Baron, to boot) plus the mean and squabbling stepsisters, while replacing those dangerously breakable glass slippers (a costumer’s and actress’s nightmare in those pre-plexiglass days!) with a pair of matching bracelets. Ferretti dumped the fairy godmother for the Prince Ramiro’s tutor Alidoro, a “philosopher” whose words and attention bring out the latent princess in Cinderella.

According to the librettist himself, he deleted the supernatural elements because Roman audiences did not want “children’s tales.” VO Artistic Director Adam Turner describes this Cinderella as “family friendly,” – OK for kids as young as 7 or so, he said – with “the sparkle that people associate with Rossini and Rossini’s music.”

“The story is familiar to kids,” explains Turner. “They will recognize the themes…of the siblings that drive them nuts, and the promise of going to a fancy dance where you need to dress up and wear beautiful outfits.”

Cinderella still provides plenty of delight for adult fans of opera and for those new to the art form. Leading soprano Alyssa Martin gets a couple of show stopping arias that the online authority allmusic.com calls “more challenging than any music Rossini had composed previously,” and stepdad Don Magnifico, allmusic adds, “has a great buffo aria …in which he complains of being awakened from sleep by noisy people.”

Turner said, “In rehearsal, we’ve all been laughing hysterically at the antics” of Dale Travis, the Met Opera and international veteran bass-baritone who plays Don Magnifico.

Turner calls Martin, who was a Virginia Opera Emerging Artist in 2014-15 season, a “virtuoso: one of those vocal acrobats who excels in bel canto singing.” This title role is her first Mainstage appearance here.

She’s already racked up a bunch of awards while being heard all over the country, with repeat engagements at the prestigious Glimmerglass Festival as well.

Travis, whose career has produced a handful of recordings and has taken him to most of the major opera venues in the world, is one of three performers making a Virginia Opera Mainstage debut.

Tenor David Walton brings his own continent spanning resume, Glimmerglass experience, bucketful of awards and great reviews to his Virginia Opera debut as Don Ramiro, Prince of Salerno. Turner calls him “another young singer who is specializing in the bel canto style all through the United States.”

Karl Buttermann, a member of the Emerging Artists program this year, plays Alindoro. East Coast reviewers have praised his voice as a “robust bass-baritone” that is “rich and mellow.”

As Dandini, Valet to the Prince, Joseph Lattanzi makes a return to Virginia Opera. He was here for 2017-18 as Sonora in La fanciulla del West and as Demetrius in A Midsummer Night’s Dream. The New York Times called his voice, in performances of Greg Spears’ Fellow Travelers with Cincinnati Opera, a “buttery baritone, luxuriant and robust.”

(The term bel canto is generally associated with an “emphasis on beauty of sound and brilliancy of performance,” says the Harvard Dictionary of Music. In other words, vocal showing off is OK, even encouraged. Rossini’s picture, and only his, accompanies the Wikipedia online article on bel canto.)

The story of Cinderella’s composition by the 24 year old Rosssini, who was just coming off the great success of his Barber of Seville seems almost magical, or at least superhuman, itself. Ferretti turned out the libretto in only 22 days, getting it to Rossini on Christmas Day, 1816, Rossini had it ready for its first performance on January 25.

The full title, in Italian, is La Cenerentola, ossia La bontà in trionfo, which translates as Cinderella, or Goodness Triumphant. “The overarching theme of the story is that kindness is rewarded,” notes Turner.

Above all else, “It’s going to be a very funny show,” promises Turner.

(Additional performances in Richmond and Fairfax)