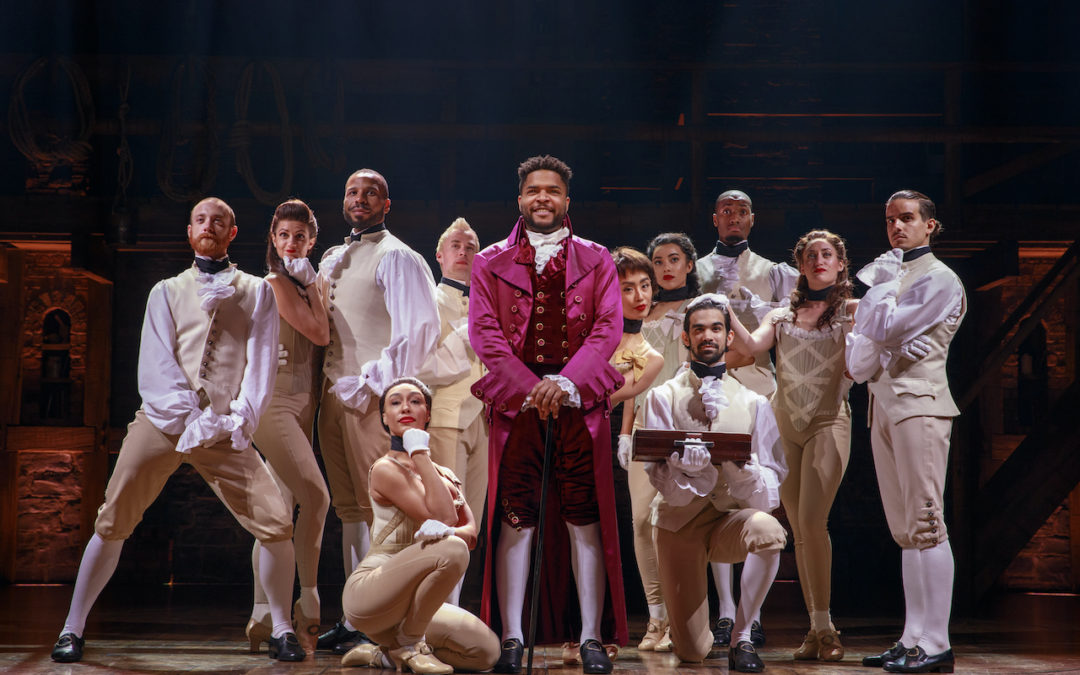 “It’s going to be exciting in Virginia as well, because we talk a lot about Virginia in the show,” says actor Josh Tower, about mid-way through our lengthy phone conversation earlier this week. Tower portrays Aaron Burr, one of the lead roles in Hamilton: An American Musical, the theatrical phenomenon that plays 23 performances at Norfolk’s Chrysler Hall this December. The actor is currently with the Angelica show cast in Philadelphia, which is the major metropolitan market that he grew up in, being raised in nearby Ambler. Once the Broadway touring show leaves Philly’s Forrest Theatre, it heads to Richmond for an extended run before closing out the year here in Hampton Roads.

Hamilton is one of just a few Broadway shows—certainly in recent American history—to become a major cultural phenomenon that transcends the typical reach of the Great White Way. Winner of an astounding 11 Tony Awards in 2016, as well as a Grammy, and the Pulitzer Prize for Drama, the Lin-Manuel Miranda created musical, which explores the life of Alexander Hamilton, one of America’s founding fathers, has captivated a broad spectrum of the American public since it debuted at the Richard Rodgers Theatre on Broadway in July 2015, officially opening on August 6th.

Besides the mountain of critical acclaim that it received, performances of Hamilton were sold-out for many months, attracting the attention and attendance of many Hollywood celebrities, and even political candidates. Just nabbing tickets for the show, especially during the extended peak of public interest in it, was considered a clout enhancing accomplishment. So due to such overwhelming success, there are Hamilton productions currently running in Chicago, San Francisco, London, as well as the original, still running New York City production on Broadway. And that’s besides the touring productions, which includes the Angelica production that is playing Virginia for the first time this month.

Playwright Lin-Manuel Miranda, who is credited with writing the music, lyrics and book for Hamilton, was inspired to create art about America’s first Secretary of the Treasury and one of its founding fathers, after reading the acclaimed 2004 Alexander Hamilton biography by Ron Chernow, the Pulitzer Prize winning biographer and journalist. This led, years later, to Miranda’s Hamilton Mixtape becoming a thing, and being performed at the Obama White House as part of a poetry and spoken word program, back in May 2009. Eventually that led to workshops of the burgeoning musical, which led to its off-Broadway premiere at The Public Theater in early 2015. Thomas Kail, who is from Alexandria, Virginia, directed both the off-Broadway and Broadway productions of the musical. His work earned him the Tony Award for Best Direction of a Musical.

With one exception, the entire off-Broadway cast of principals reprised their roles on Broadway, including of course the playwright himself as Alexander Hamilton, Leslie Odom Jr. as Aaron Burr, Phillipa Soo as Eliza Hamilton, Christopher Jackson as George Washington, and Daveed Diggs in the dual roles of Thomas Jefferson and Marquis de Lafayette. They were all nominated for Tony Awards.

While Hamilton continued its record-breaking success and cultural ubiquity, Josh Tower looked on as a member of its extended family, having performed as George Washington in a workshop prior to the show’s off-Broadway run. Tower has enjoyed success on Broadway, including roles in Ragtime and The Lion King, as well as the high-profile role of Motown Founder, Berry Gordy, in the excellent Motown: the Musical. Tower did audition for roles in the show after it was up and running, but would never secure the intended part…at least not until he turned his attention to the show’s intriguing antagonist and narrator, Aaron Burr.

“I said if Burr ever opens up, let me know, because that role really intrigues me,” the actor recalls. The character of Burr is hugely important in Hamilton. He’s the only character who pops in and out of the show’s action—narrating it and sometimes addressing the audience directly.

Over the course of nearly 3 hours and during two acts, Alexander Hamilton’s fascinating life as one of this country’s founding fathers is explored in remarkable detail, considering that Hamilton is a musical. Hamilton was born out of wedlock in the West Indies. His marriage and affair, as well as his relationships with presidents George Washington and Thomas Jefferson, and other key historical figures, are sung and rapped about throughout the show. Burr is initially one of his impactful friends, but eventually becomes Hamilton’s killer, via an infamous duel that also ends Burr’s political career.

“He’s the guy who was, by social status and family status, given everything…on a silver spoon. And still yet rides on the coattails of Hamilton,” says Tower, regarding Burr. “He just cannot get ahead of this guy, who by all reasoning should not be where he is… He ascends Burr in lots of ways.”

Leslie Odom Jr. won the Tony Award for Best Actor in a Musical for playing Aaron Burr, actually beating out Lin-Manuel Miranda in that category. Since taking on the role of Burr in this U.S. tour, Tower has earned raves for his performance by various regional papers. The tour is also helping him connect to his family members on both sides—adopted and biological. Early on in our conversation, the actor tells me about his biological father, Edward E. Howard, whom he never actually met, who lived in Hampton Roads for many years after retiring from the Air Force. Mr. Howard was a local gospel singer, who was married with kids, and very active in his local community. He passed away in 1993.

Coming here to Norfolk will allow Tower’s half-brothers and other local family to see him in this production during its lengthy run. “These are all the jewels in the crown of this tour for me,” he says. Besides reconnecting with family, the actor is looking forward to the reactions from Hampton Roads audiences to the musical, as much of the history explored in Hamilton occurs in Virginia, during the time of the American Revolution. Not to mention that founding fathers George Washington,   Thomas Jefferson, and James Madison were all Virginians, and are featured characters in the show. “I think Virginia is gonna love it,” Tower says, nearing the end of our chat. “We sit and talk about Virginia in depth.”

“They get to cheer their home state,” the actor continues. “And I think that’s a really healthy thing.”