Jefferson: Architect of Many Things 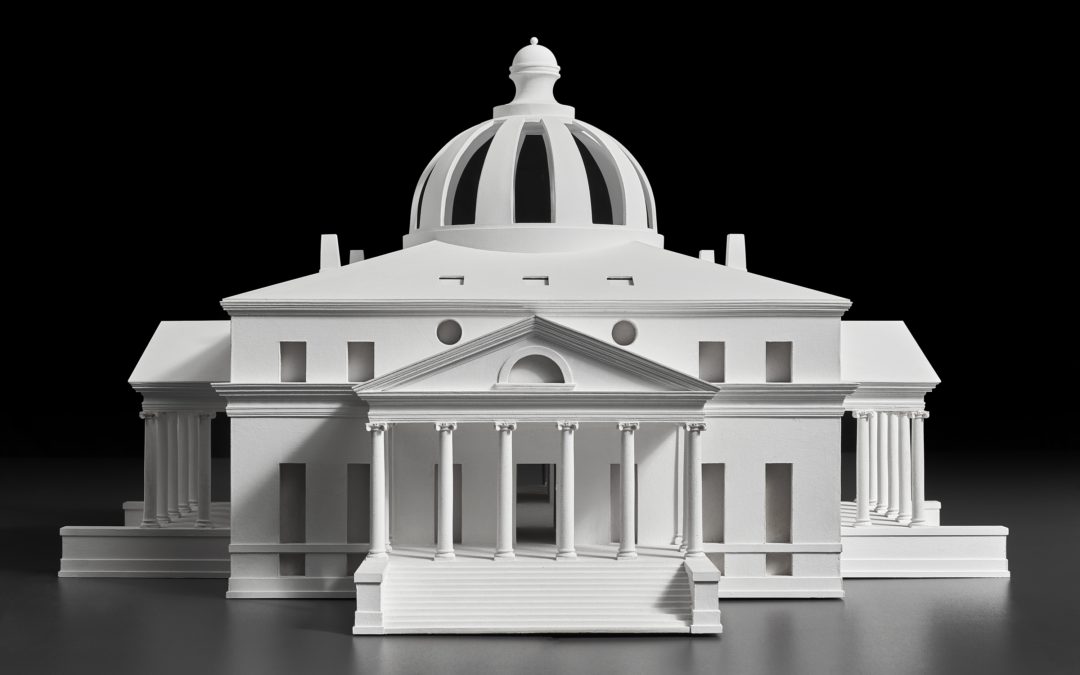 Many narratives could be and have been crafted about Virginia-born Thomas Jefferson. The Chrysler Museum has chosen to view this remarkable—and contradictory—Founding Father through the lens of architecture in an in house-curated exhibition with the subtitle “Palladian Models, Democratic Principles, and the Conflict of Ideals.”
Providing a structured way of approaching the beautiful architectural models, drawings, paintings, prints, photographs, books—lots of books—decorative objects, and artifacts are some nine themes that underscore the breadth of Jefferson’s influence and the scope of his influences: Virginia Foundations, The Grand Tour, Enlightenment Ideals, Makers and Design, Palladio and Palladianism, Villa Ideology, University of Virginia, The Pantheon, Capital Cities and Public Buildings, and Drawings.
Taken together, they provide content and context for those of us who want to better understand our fledgling nation’s third president, previous vice-president, author of the Declaration of Independence, ambassador, architect, and agrarian who is known to have decried slavery on the one hand, yet depended on this brutal economic and social system for his way of life. The exhibition is paired with one entitled “The Architecture of Slavery,” photograph-and-text-based work by Keris Salmon.
Never trained as an architect, Jefferson was nonetheless a learned and well-traveled man with wide-ranging curiosity, and his ideas helped “brand” our young republic. Chief among the towns and buildings that bear his imprint are the layout of Washington, D.C., the president’s residence (Jefferson’s specific design was not chosen) and the Capitol. In Virginia, the urban plan of Richmond, the State Capitol, courthouses, the iconic Monticello, country houses like Barboursville, and the University of Virginia’s Rotunda—which is an inspired interpretation of the Pantheon—all represent, in their geometric purity, a symbolic ideal.
Travel to Italy, France, and England to see city plans and ancient and contemporary monuments, visits to notable English country houses, and perusing tomes like Andrea Palladio’s The Four Books of Architecture—of which Jefferson owned many copies in his library of architectural treatises—linked ideals of democracy and governance with the architecture of Greece and Rome in his mind. Jefferson found in pre-Christian classical architecture, with its emphasis on reason, order, and rationality, a metaphor for the legitimacy of a fledgling government resting on historical examples rather than on the divine right to rule claimed by kings.
Lofty ideals of liberty and equality resting on the backs of the expertise and labor of enslaved people is hardly new, yet deeply troubling. To address this unresolved conflict, visitors to the exhibition will find objects relating to the abolition movement and others that honor the contributions of, especially, Isaac Jefferson and John Hemmings, two enslaved artisans who played critical roles in the construction of Monticello and Poplar Forest.
With the simple scan of a QR code, visitors can also access diverse perspectives on the objects in the exhibition. Through “Community Voices,” an audio commentary project, local leaders, subject experts, and educators offer new ways of thinking about old ideas and thorny conflicts.
But that’s not the only way to access this exhibition. Kids of all ages can gather ‘round a large Lego table to build concrete visual representations of abstract ideals. Or you can draw while sitting on museum-provided stools. On the third day I visited the exhibition—those pristine architectural models kept calling me back—a young woman was sitting sketching in front of a design of Venice’s Rialto Bridge that was never actually built.
Later, as we happened to be leaving together, we struck up a conversation. Between jobs in her field of social work, she had just come from an art retreat in North Carolina where participants were encouraged to respond to the pull of objects in the museum, engaging with them through drawing to see what they might have to “say.” She was modeling the same practice at the Chrysler, learning only after drawing the bridge and reading the accompanying text panel that it had never been built which ignited a powerful reflection on the bridges in her life that had yet to be built.