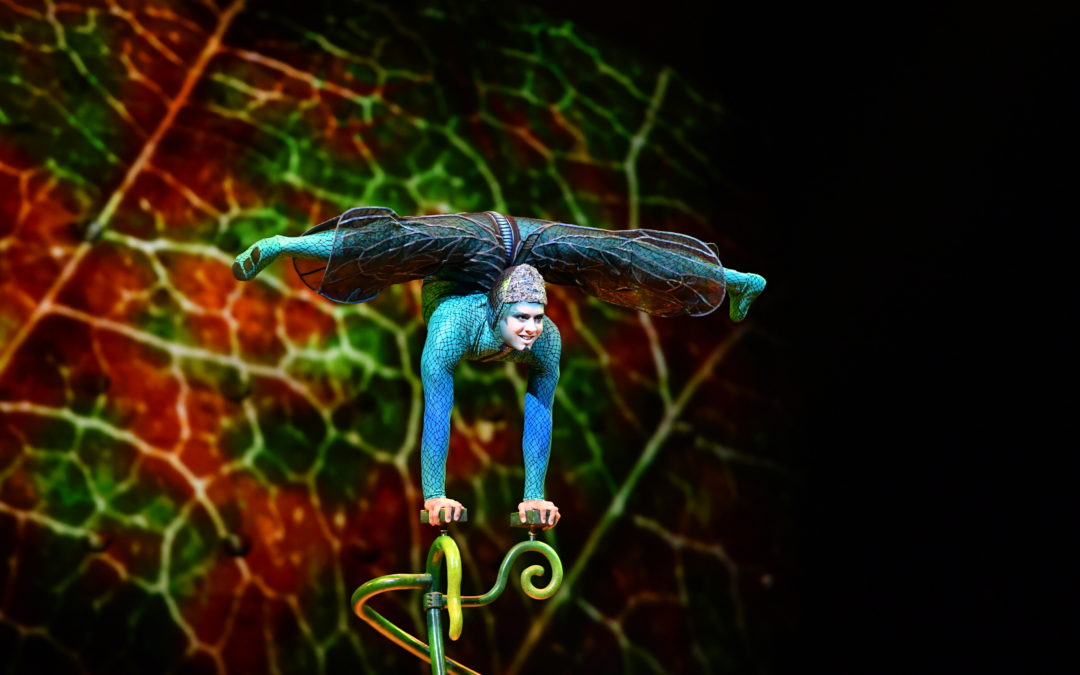 Here’s yet another artistic coup for Norfolk — the superbly crafted and breathtakingly executed OVO — a Cirque du Soleil production which opens its national tour right here with five performances at Scope.
Who has not heard of the legendary Cirque du Soleil – the worldwide phenomenon? Theirs is a magical concept that continues to capture the hearts and imaginations of millions.
Ever since Cirque du Soleil (literally, circus of the sun) exploded onto the international stage back in 1987 it continues to define, expand and re-define the art of circus. This is Hollywood, Montreal style; it’s Broadway, it’s Las Vegas and, in short, it’s magic! Cirque du Soleil continues to bring wonder and delight to more than 190 million spectators and fans in more than 60 different countries.

OVO – THE EGG
Ovo = view of the show. (sorry, could not resist that one)
Come take a rush headlong into an immersive world of acrobatic insects, stunningly portrayed in a nonstop riot of energy. This is a world where insects work, play, flutter around, fight and look for love.
When a mysterious egg (ovo, remember?) appears, all of the assembled insects are naturally intensely curious about this newcomer that represents the enigma and cycles of their own lives. It turns out to be love at first sight when the gawky and quirky one arrives only to catch the eye of a fabulous ladybug – and the feeling is mutual.
Expect to be amazed by the nonstop energy, the sheer precision and split second timing. Flips and somersaults, foot juggling, hand balancing, contortions of every kind, aerial straps, slack wire (thin flexible tight ropes) and eye popping techniques on the trampoline are the hallmarks of this show.

So why OVO?
This is Cirque du Soleil’s first and only show featuring bugs! Well both the director and composer of the score for the show are Brazilian where Portuguese is the native language. Composer Berna Cappas combines the familiar sound of bossa nova and samba with funk and electronic music. He studied in depth the distinct sounds of various insects. A band of real live musicians, dressed as cockroaches , accompanies the spectacle. As the music is live, the musicians have to adapt to what is happening on stage at every minute. The band features 11different instruments – the percussionist has a starring role, performing on no less than 30 different instruments. In all, there are 17 different species of insect that you will encounter in OVO. Led by the three “principals” — the ladybug, the fly and the beetle, the ensemble includes crickets, scarabs, butterflies, red ants, flies, fireflies, silver spiders, dragonfly, black spider, red spider, white spider, mosquitoes and wood insects.
OVO was created by Cirque du Soleil as the company’s 25th production on the company’s 25th anniversary and was premiered to instant acclaim in Montreal. The show toured in the company’s signature “big top” for more than six years, performing in dozens of cities in 6 different countries.
The show was then transformed into an “arena” show and has now been enjoyed by more than 6 million in leading arenas and stadia around the world.
The show opens with a gigantic egg on the stage. Measuring 28 feet wide and 22 feet tall, this is of course the centerpiece. Set Designer, Gringo Cardia got his inspiration from the actual structures that insects create as they establish nest and colonies. Interestingly, there are no straight lines to be found anywhere in the set. The Wall is curved and so is the stage. This arena version includes some amazing projections shot over a period of 40 days in a miniature forest created especially. Other interesting notes about the show exemplify the sheer magnitude of the vision and the show: the acrobatic grid, for example, is 45 feet from the arena floor and the grid weighs an astonishing 22,000 lbs while the stage floor consists of no less than 225 separate panels spanning a diameter of 12.8 meters. More than 100 moving lights are utilized in the production and there are more than 100 speakers featuring surround sound. There is even a “jungle gym” in the backstage area – a huge structure in which the acrobats can warm up and rehearse.

A BIG SHOW
More than 100 cast and crew are in this production and the logistics and taking it on the road and performing in multiple cities has to be overwhelming! A staggering 19 trucks filled with more than 700 road cases haul the show from city to city. On average, it takes approximately thirteen hours to set up the show and about 4 hours to take it down.
OVO features 52 performing artists from 14 different countries. Most of them former athletes, they are all masters of their art. Several performers grew up in traditional circus families. Qiu Jianming, our Silver Spider performing Slack wire, follows the traditions of his father and grandfather as star attractions in a circus and his mother is currently his coach who travels with him.
Meanwhile, Ariunsanaa Bataa, the White Spider who performs breathtaking contortions in OVO, follows her father as a circus artist. When she was just a child, he told her that she was actually too tall to be a contortionist. Now she is quite simply one of the best in the world.
There are 2 Olympians in the OVO cast – Olga Shcherbatykh competed in the gymnastic games in Athens in 2004 and Nansy Damianova is an alumna of the Beijing Games in 2008.
And of special note to Norfolk audiences, two members of the cast have strong roots right here in Hampton Roads. Isaac Haywood is Head of Lighting for the tour, having only joined the company this year. He studied at the Governors School for the Arts in Norfolk. And Dominic Barge, trampolinist, joined the company in 2017 having previously competed in double mini trampoline events, high diving and trampoline wall events. His family now resides in Norfolk too.

HOW TO FEED THEM ALL
Also of note is the fact that the tour carries its own catering truck. The catering team has to feed 100 people with vastly differing tastes, preparing on average 1,200 meals per week. An average of 50 pineapples, 100 lbs of apples and more than 100 lbs of potatoes are consumed each week. Add to that more than 700 eggs, 60 lbs of fish, 100 lbs of chicken and anywhere from 80 to 120 lbs of pork and beef and voila —- the cast and crew of OVO are satisfied.
In short, it’s a spectacular show, an event not to be missed. Run, don’t walk, to get your tickets.