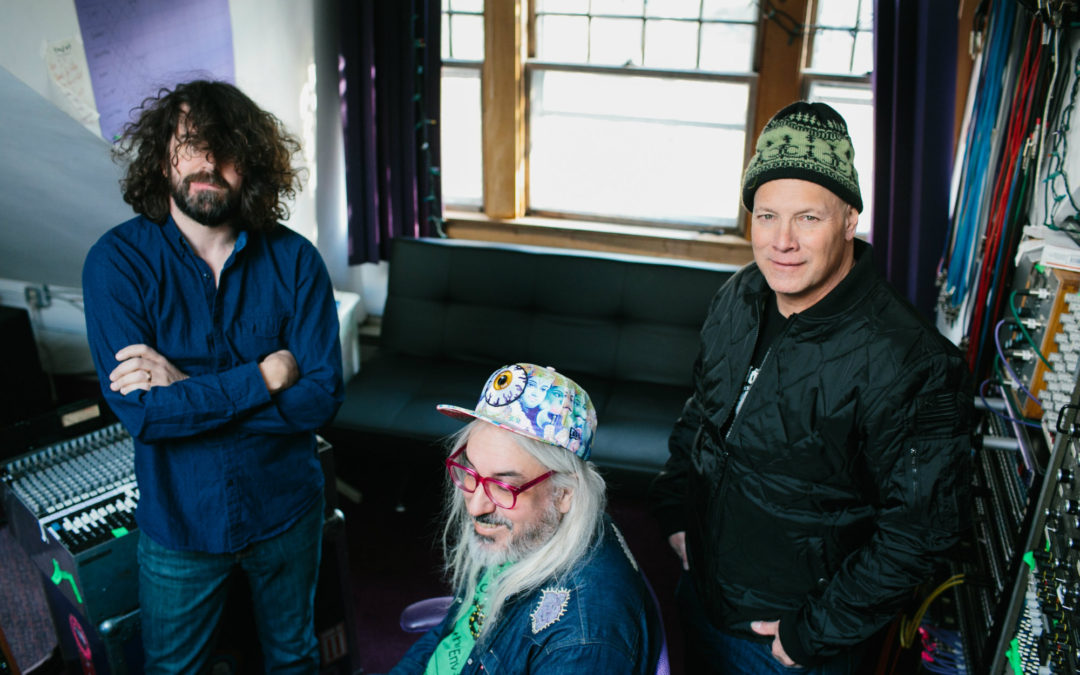 Dinosaur Jr. is a band that never quite seems to get the recognition or chart success as pioneers of alternative rock and grunge. But, here they are 35 years down the road, reunited for nearly 15 years after a nasty breakup, and hitting the road for a tour that brings them to The NorVa on November 17.

Songwriter and frontman J Mascis still exerts a heavy guiding hand on his mates, bassist Lou Barlow and drummer Emmett Jefferson Murphy III.  Murph, the son of an African studies professor at Smith College, met the others in Amherst, Massachusetts, while still in high school. He fielded questions at his home in Massachusetts.

Veer: You’re headed into the studio after the tour. How does recording work these days? Does J have the songs ready?

Murph:   It’s pretty much the same since day one. J has demos. He’ll play drums and like some scratch guitar and maybe some scratch vocal. And he usually gives that to me first because drums are first. I start learning the parts. And then Lou gets a demo. He’s (J) a little more open with bass lines. Because he doesn’t really care as much. The reason he’s so specific about the drums is his guitar playing is literally going with the kick and snare. He writes an exact match to the way he’s strumming the guitar.

Then we put it together and it starts sounding more like Dinosaur Jr. I’ll interpret certain breaks. I’ll put in my own thing, just because sometimes J’s stuff feels too weird for me. At first, I used to feel like that was a weird way to do it. And now I’m almost grateful because it’s so tight.  You eliminate the too-many-cooks-in-the-kitchen syndrome.

He’s writing it down the way he hears it in his head. So there’s no mistaking the way it’s going to sound. He’s always approached it like a composer where he holds multiple instruments, everything in his head, which I think is rare, because with most people it’s a lot more organic.

Veer: So he is the maestro.

Murph:  But I’m not just an automaton. It’s not like math class, like, here’s this equation, plug it in. It sounds like that. But it’s not like that. It’s different. It’s more organic. J’s recorded a lot of records himself, where he literally played all the instruments and they sound great. But I do think there is a dynamic when you get other people in the mix.

That’s really where Dinosaur Jr. takes shape as we interpret J’s ideas. And if, if they’re close enough that J can work with them, we do it. If it’s way too far off, we morph it into another song entirely, or just come back to it.

Veer: You guys have a famously raucous history. You broke up, took years off, and then got back together in 2005. How was that process?

Murph: The basis of getting back together was really our manager. We got individual calls, ‘Hey, I’m working with J now. You want to do a reunion?’ Me and Lou were on board right away. We never thought J would come back to it. He was pretty adamant about going his own path. And we respectively were like, okay, that’s fine.

We did it just like the old days. Lou was living in LA and I flew out there first. We got together to practice. Within 20 minutes, we felt like we were like we were back in J’s basement literally after not playing together for 15 years. There was obviously some undeniable chemistry that never went away. So we just l got right back into it.

Yeah, it’s always been tough negotiating our personalities because we are really different. It is still sometimes an awkward space, but we’ve just learned, that’s just the dynamic of the band. It’s like that with a lot of situations. You just get used to that kind of uncomfortableness. It’s something that’s part of the deal.

Veer: How would you describe being in the band now.

Murph: We really have fun. And we are able to, express ourselves and really get behind the music. In the early days, it was just a struggle. We were all at really different levels of musicianship. J was way more critical of me and Lou, and he would say things that kept you on edge that were not confidence inspiring. Now, it’s totally opposite. You know, J will say, ‘Oh, that sounded good.’ And he never said that in the old days. I don’t think if we didn’t change and emerge into a more functional dynamic it would have been possible to keep playing. Those guys have kids. I don’t have kids, but I see it in my friends. You’re forced into a whole new way of being accepting and tolerant. That helped the band.

Veer: I wonder what you were listening to when you joined the band and what you listen to these days.

Murph:  I was always the Proggy guy in the band. Those guys really turned me on to hardcore and punk. I wasn’t super into it when I met those guys. I was way into all the 70s jazz fusion stuff like King Crimson, Mahavishnu, Zappa. That was a clash. Those guys definitely did not like that stuff. They were strictly thrash and really militant in their musical beliefs. I was kind of listening to everything. And I’ve always been like that. I mean, today more than ever, because there’s so many older guys now reuniting. You know, I saw John McLaughlin’s last concert like two years ago or so and it was awesome.

Veer: Do you have a favorite Dinosaur Jr. album?

Murph: Definitely the last few we’ve done after the reunion. But “Where You Been” is probably one of my favorites, even though Lou is not on that record. Just because the recording. We went to Dreamland in Woodstock, New York. And it’s this whole church, it’s just big wooden room and the drums, I totally was able to get like that Bonham sound. To this day, there’s something about it.

Veer: The band has been famously loud over the years. Is that still the case? How’s the hearing?

Murph:  We’ve been wearing earplugs since we were like 20. And it’s still insanely loud.  We’ve gotten so used to it. I don’t think we could turn down. I think we’d be lost. If we tried to play minimally we would all just feel like I don’t know how to do this. This is too weird. The only time I have a hard time with it is if we’re in a smaller club that doesn’t have a like super powerful PA and the drums can get buried. Then it’s really hard for me because I have to have like super loud monitors to keep up with J’s amperage because it’s so crazy powerful. If I can’t feel and hear the drums, it’s really hard for me to get inspired.