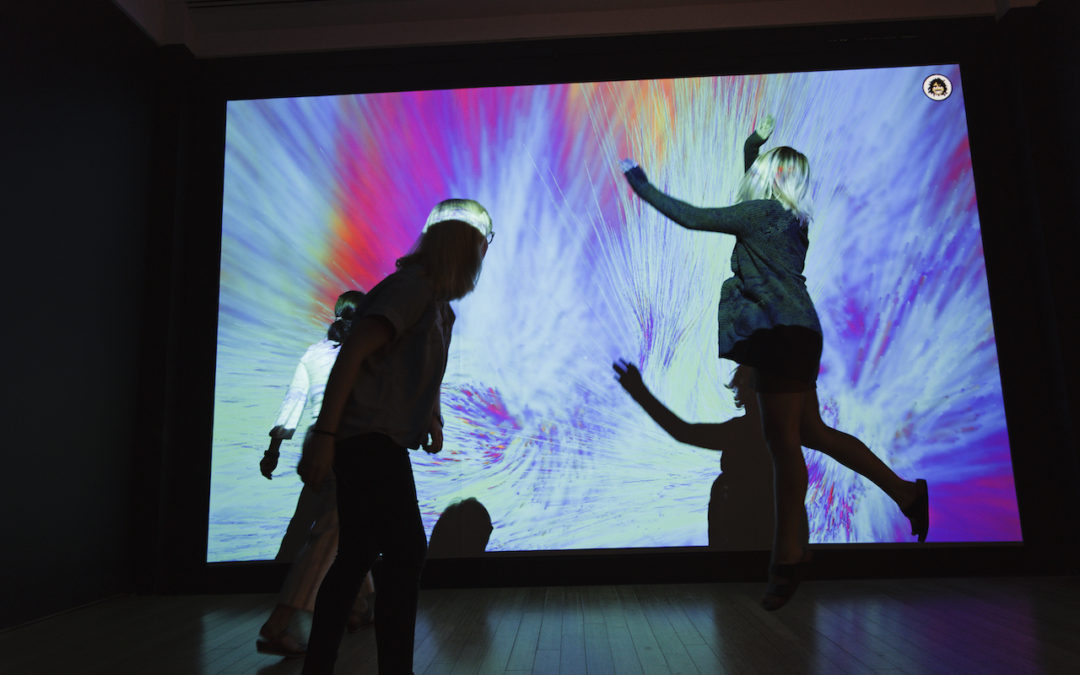 Whether you need a little exuberance, pathos, quiet contemplation, or sly humor in your life, you will find it in MOCA’s current exhibition, Charged.

Curated by Heather Hakimzadeh after a long incubation period, the show is her multi-layered answer to the question of what role new media plays in the contemporary art world.  “Charged” is a double entendre referring both to the role of electricity and the emotional “charge” touched off by the eight works that comprise the exhibition.  If that sounds small, the exhibition makes up in depth what it may lack in square footage.  Still it left me craving more.

Inspired by the exhibition of “Night Hunter” by Stacey Steers at MOCA in summer 2013, Hakimzadeh took her time in piecing together a thoughtful exhibition with a splash of ooh-ah, but one that avoids reliance on the wow factor for impact.  Her highly intentional approach to the curation of this exhibition offers viewers the opportunity to feel a spectrum of subtle emotions—intimacy, anxiety, release—and construct a range of questions, many about what it means to be human in a technology-mediated world.

For this exhibition, Hakimzadeh chose Steers’ “Oculus II,” a captivating blend of old and new in which nostalgia and a vintage aesthetic combine with a contemporary sensibility and technology.  Through a highly personal process, this Colorado-based filmmaker spends years on each piece—five on this one—laboriously and intricately blending thousands of handmade works on paper with actors from silent films to create evocative narratives.

Entitled, “The Edge of Alchemy,” this film starring Mary Pickford and Janet Gaynor, viewed through a circular construction of found and antique objects, creates an intimate viewing experience for this beautiful, but ominous Frankenstein-inspired tale about the creation of a hybrid bee-woman with all of the implications that implies about the perilous plight of bees and the collapse not just of colonies, but our food supply.

Born in Mexico and residing in Canada, Rafael Lozano-Hemmer uses facial recognition and surveillance technology in “The Year’s Midnight” to raise serious questions using gallows humor about what we lose when our lives are wittingly or unknowingly mediated by technology.  Without ruining the surprise, suffice it to say that your digital fate will be the same as St. Lucy’s, the Patron Saint of the Blind.

A work like “Body Paint” by Memo Akten, born in Turkey and based in London, also responds to viewers’ movements—even subtle ones—with exploding and discreet streaks and vibrations of tropical colors across a wall-sized digital canvas.  The resulting compositions ebb, flow, and evolve over time as visitors explore their relationships to their own bodies and to their particular ways of moving through space mediated by the self-consciousness that comes with being observed and recorded.

In the adjacent gallery, a work like ”Pygmies” by Pors and Rao responds only to viewers’ silence.  Patience—and silence—is rewarded by the emergence of shy little wooden forms that peak out from behind three white rectangular panels.  At the first sound, they quickly retract, their movements controlled by timed motors.

Anthropomorphism also plays a role also in the duo’s other exhibited works: “Observers” and “Heavy Hat.”  Engineering, computer programming, and manufacturing coalesce to produce human-like forms in these collaborations by Aparna Rao from India and Søren Pors from Denmark.   The “observers” are identical forms with a distinctly Netherlandish aesthetic arranged in a set of descending wall-mounted rows.  They snap their “heads” right and left in unison in response to other presences.

Nearby, an upside-down figure rolls around on his “heavy hat” teetering this way and that in response to detected presences, creating a tension akin to watching someone ride a unicycle for the first time.  Viewers, as catalysts, are made to feel vaguely responsible for the lunging movements and the ultimate safety of this up-ended figure.

Electronic new media pioneer Alan Rath’s two robotic arms in “Yet Again,” swing, rotate, hover, and flutter in response to open-ended algorithms.  The possibilities for the arms’ behavior evolve over time creating a kind of choreography in which the arms appear to converse and even flirt.

Long-time collaborators, Ross Birrell and David Harding, explore “fuga” from which “fugue” and “refugee” derive in “Triptych” a video documentation of a symphonic performance across three screens, not unlike a tripartite altarpiece.  Here, visitors sit on an artist-designed bench—a kind of folded triptych, if you will—to view the Athens State Orchestra, the Syrian Expat Philharmonic Orchestra, and Syrian soprano Rasha Rizk perform Henryk Gorecki’s 1976 Symphony No. 3: Symphony of Sorrowful Songs. Whether one understands the language, the emotional toll of individual and collective loss and deprivation is seen, felt, and heard.

From now through mid-February MOCA would is a good place to get your STEAM on.