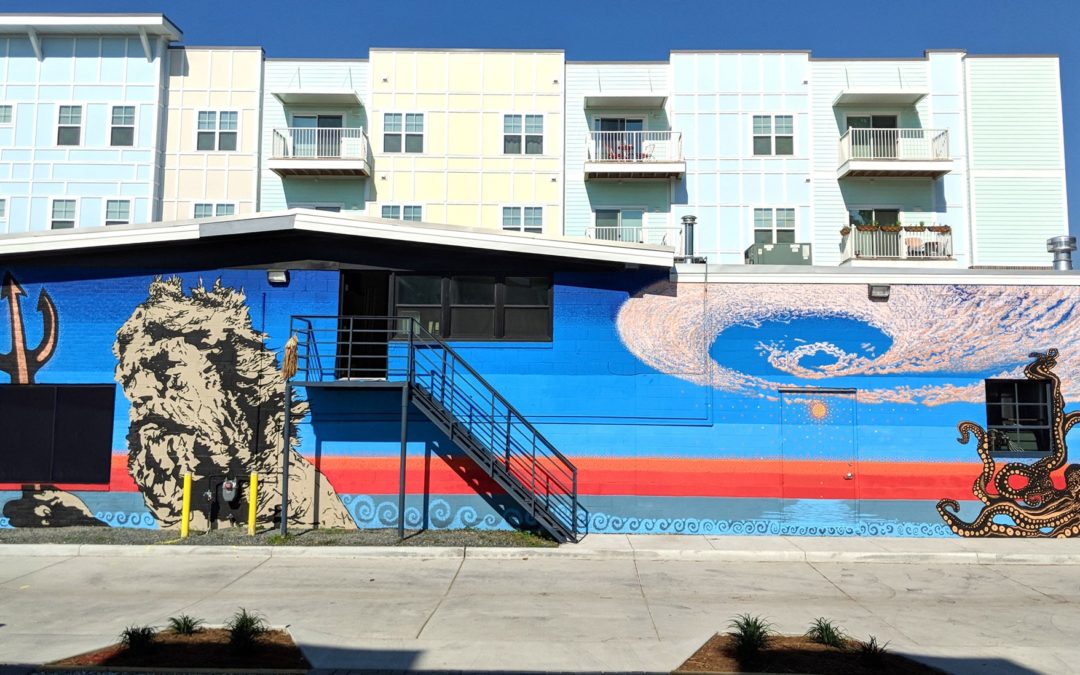 Let’s go back, back into time, back to 1995. “Gangsta’s Paradise” by Coolio was number 1 on the Top 100 songs of the year, and somehow Van Halen was number 100 with, we kid you not, their version of “I Can’t Stop Lovin’ You.” The beer scene, at least in the 757, was in its infancy as Norfolk’s own Steamship Brewing Company was making “Captain’s Lager” and “Raspberry Ale.” Homebrewing was becoming more popular, guided locally by clubs such as the Hampton Roads Brewing & Tasting Society (HRB&TS) and nationally by the American Homebrewing Association (AHA).

And Rhett Rebold was on top of the homebrewing world. His English Bitter won a gold medal at the AHA’s 1995 National Homebrew Contest, and his Helles Lager won Best of Show – it was judged to be the best homebrewed beer in the beer in the nation’s largest and most respected homebrew competition. Homebrewing is both a scientific pursuit (a little chemistry knowledge can go a long way) and an artistic one (how will vanilla beans in the boil enhance your coffee porter?).  More than 20 years later, Rhett is opening his own brewery, to “blend the fine art of brewing” with a “commitment to provide, grow and serve as an integral hub of the vibrant local visual and acoustic arts community.” On or about November 22, Rhett Rebold will be welcoming thirsty patrons to Vibrant Shore Brewing Company in the ViBe Creative District of Virginia Beach.

Rhett said that the construction of the brewery took a long time. While he purchased the 1950’s era building in November 2017, it took until August 2018 to get a permit from the city to start the project. The contractor, Spacemakers, started work in 2018, and if everything works out right this  their labor will come to fruition this month. Come Friday, November 22, you should be able to wash down that Thanksgiving dinner you had with relatives that you don’t like all that much with artisan ales in an arty environment that you will like a lot.

There will be a comfortable vibe at Vibrant Shore, both inside and outside, with a nod to artistes everywhere you look. A big mural of King Neptune will greet you as you approach the building from the east. Inside, the bar top is made of poured cement and aggregate, while the front of the bar is a Chanel-ish Breton striped panel, a Surrealistic salute to the sea lapping at the shore three blocks away, and to artists everywhere. Original “objet d’art” will be on the walls on the building’s first and second floors. There is a second deck beer garden out back for those that prefer to linger over lagers al fresco, and there are plans to put a keg box up there so you don’t have to walk to hell and back for a Helles.

For opening day, the beautiful 10-barrel Deutsche Beverage brewhouse will be put through its paces, initially producing five beers designed to please your palate: a juicy, but not hazy, India Pale Ale (IPA); a tropical-ish double IPA; a brown ale; a kolsch; and a British bitter. Future plans include creating a fruited gose and a dry, but not too dry, stout.

Rhett told us “I want to be the intersection of beer and art,” and he has named the fermenters after Surrealist artists. “Breton” is a tribute to Andre Breton, a founder of Surrealism and defender of the faith, until he had a tiff with Soviet writer Ehrenburg, who had the effrontery to say that Surrealists were “pederasts.” Andre took maximum umbrage at that, and is said to have replied “Your mama so old, she was a waitress at the Last Supper.” “Dali” is a tribute to Salvatore Dali, who gave us that trippy painting “The Persistence of Memory” that has the melting pocket watches on it. Dali may have written the longest title for a painting ever when he painted “Dream Caused by the Flight of a Bee Around a Pomegranate a Second Before Awakening.” Dali apparently told no “Your Mama” jokes. Two of the more interesting fermenter names are “Man Ray” and “Miller.” Lee Miller was an American photographer and a war correspondent in the second World War. She and Man Ray, also a photographer, had a thing going on, and as the war was approaching its end, she posed nude for Man Ray in one of Hitler’s palace bathtubs after the facility was liberated by Allied forces. While neither Ms. Miller nor Mr. Man Ray left a record of “Your Mama” jokes, it’s rumored in a tribute to acoustic artists everywhere that Man Ray postulated “Question: What’s the difference between a guitarist and a 16-inch pizza? Answer: The pizza can feed a family of four.”

In other beer news, on Saturday November 30 the second annual Field Dayz Fest will be held from 2 to 8  pm (entrance at 12:45 with VIP tickets) on the Lawns of the Colonial Williamsburg Art Museum. This is the brainchild of the Precarious Beer Project and Amber Ox, and will feature over 40 craft breweries pouring one-off and tasting room exclusives, not the same-old beers you see at every festival. AND it’s not just beer…there will be field days activities that bring you back to your childhood when classes were cancelled and the day was spent playing tetherball, four square, relays, and the like. No word if there will be a hopsack race but how cool would that be? Plus, three bands, five restaurants serving food, and a super friendly atmosphere with many brewers in attendance. General admission is $50, VIP admission is $75 (may already be sold out). A portion of all proceeds benefit CHKD and they are accepting toy donations for infant-age babies. Trust us, this is a beer festival you won’t want to miss. Buy tickets at www.precariousbeer.com or through their Facebook page.