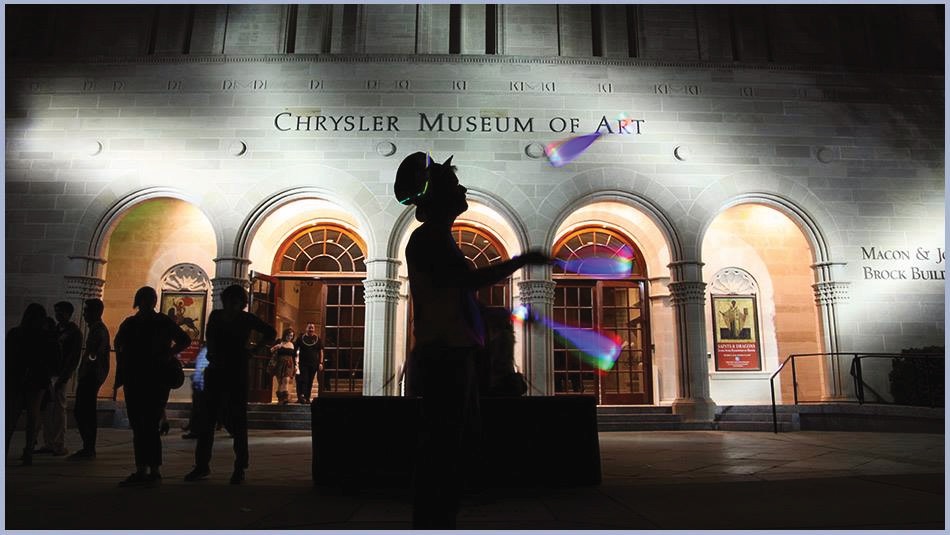 (Artists descend upon the Chrysler Museum during NEON Festival)

The third weekend in October—which includes the Town Point Wine Festival and the Stockley Gardens Arts Festival—is widely considered one of the best weekends of the year in Norfolk—if not all of Hampton Roads.

For the last four years, the Downtown Norfolk Council and its partners have gotten a head start on the weekend by hosting the NEON Festival in the “New Energy Of Norfolk” arts district on the preceding Thursday and Friday.

“It’s a great weekend in Norfolk,” said Rachel McCall, a special projects manager at the DNC and co-chair of the NEON Festival. “We just want to be the lead-in for a really great arts weekend.”

In keeping with tradition, the fifth annual NEON Festival will take place from 6 to 10 p.m. on Oct. 17 and 18. The epicenter of the arts district is where Granby Street intersects Olney Road, but activities are planned for several blocks in every direction.

The heart of the festival is a varied slate of local artists and performers selected through an open call process in August. “It’s really the opportunity where we can showcase the arts community in Norfolk,” McCall said. “That’s why I love the open call so much: It’s really available to anybody, and our applicants have grown so much since we first started doing it. This year we had a record number of applicants. We’re starting to get more known artists who are applying. We’re getting larger bands who want to play. So, the recognition is really growing a lot.”

Another annual highlight is the addition of new murals in the NEON District. “We generally do two to three murals,” McCall said, “but we really wanted to do five special ones this year. So that will be a really big unveil the night of, and we’ll have mural tours that highlight all of those new pieces.”

The Business Consortium for Arts Support has co-sponsored the NEON Festival since it began. Old Dominion University signed on as a presenting sponsor this year. “They’ve been wonderful,” McCall said. “They’re bringing a lot more student engagement and different art programs from the university they’ll be showcasing during the festival, which is really exciting.”

Full disclosure: The first NEON Festival started on a Thursday to coincide with the Chrysler Museum’s popular “Third Thursday” event. “They’ve been an amazing partner,” McCall said, noting that the museum stays open late during the festival and waives the cover charge for its monthly Glass Studio performance.

“Each year they have a different class of artists, so we kind of keep getting this fresh energy through the glass studio, which is, is really, really nice,” McCall said. “And it’s across the street from the d’Art center, so there’s a nice synergy between the two art programs there.”

This year’s “Third Thursday” will feature a performance by Brooklyn artist Esteban del Valle. Admission to “Third Thursday” is free, but advance tickets are required. For tickets and more information, visit chrysler.org.

Looking back on the first four years of the festival, McCall said 2018 was “really special.” “It felt like we were starting to gel,” she said. “Like we were getting really good submissions from the community. We had more volunteers. And it was starting to feel more and more active without us trying to get things in the festival.”

That said, the first year—2015—was seminal. “It really came together somehow,” McCall said. “The murals were really special that year, and it was so collaborative. That was really fun. … It was the first time I really saw people turning out for the NEON District. That kind of gave us a blueprint for all the rest of the years.”

●      Third Thursday at the Chrysler Museum Glass Studio with New York-based artist Esteban del Valle, one of the original NEON muralists from 2015

●      Unconventional Exhibition Opening at d’Art Center Thursday with refreshments, a make & take, art for sale and a DJ

For more information about the NEON Festival, visit neonnfk.com or @neonnfk on social media.