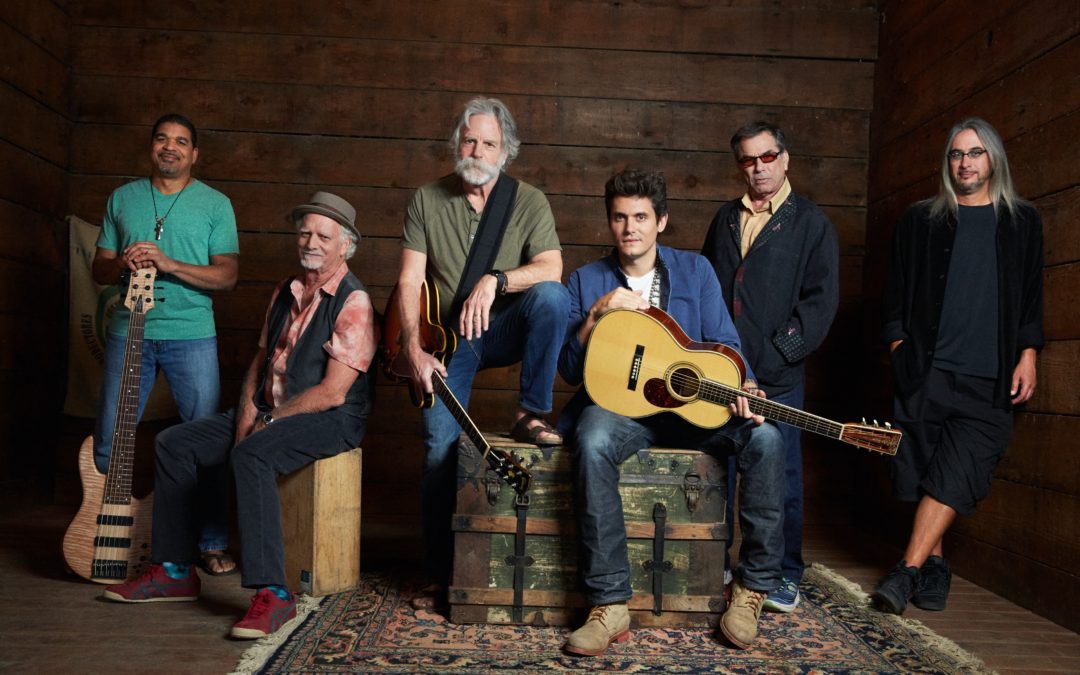 Don’t tell me this town ain’t got no heart….when I can hear it beat out loud! Hampton’s heart will be beating a Technicolor rhythm when Dead & Company play the Hampton Coliseum on Friday, November 8 and Saturday, November 9, in what most assuredly will be two days of felicitous music & frivolity. Dead & Company is composed of Grateful Dead alums Bob Weir (guitar & vocals), Mickey Hart & Bill Kreutzmann (drums/percussion),  assisted by John Mayer (guitar), Oteil Burbridge (bass) & Jeff Chimenti  (keyboards).

Dead shows at the Coliseum were always legendary. They had a general admission, “no assigned seats” policy that meant you could sit with your friends even if you didn’t buy tickets together, you could move ‘round and ‘round to check out the sound in different parts of the building, meander onto the floor, and amble to the nosebleed seats when your brain turned to jello during the space sequence, with no usher to shoo you out of that chair you just parked in. The acoustics were great, your fellow Deadheads were kindred spirits, & you could merge with the rippling tie-dyes of the dancers on a not too long, moderately strange, trip. In addition, the parking lot scene was fun (“tasty sandwiches,” dancing bears, and colorful threads), and the set lists were sublime. The Grateful Dead, er, Warlocks, last played there in October of 1989. We had general admission tickets; they were $18.50 each, and the shows were great. We bought our tickets at Tracks at Wards Corner. Move forward 30 years, and we have seated tickets, they were $179 each, and we’re pretty sure that the shows are going to be great. The price was likely inflated by resellers, but it’s about the same price as Hamilton tickets and you get to dance, which staves off cognitive decline according to research. So, seeing Dead & Company is medicinal.

When you get down to brass tacks (or scarlett begonias), the thing that made a Grateful Dead show great was the music, and the same will be true for November’s Dead & Company shows — their music will move you. How should you prepare yourself for these upcoming shows? If you’re an experienced attendee or a rookie, it’s best adhere to the sage advice given in “The Wheel,” a Robert Hunter/Jerry Garcia/Bill Kreutzmann composition: “The wheel is turning & you can’t slow down, you can’t let go and you can’t hold on, you can’t go back & you can’t stand still, if the thunder don’t get you then the lightning will.”

Bring on the lightning.

What makes the music so good? The jams, the covers (yes, really!), and the seamless (well, usually) way they improvise.

First, the jams. The Grateful Dead was perhaps the original jam band, the King Kong if you will of jam bands. Dead & Company, having some of the same DNA, is the Son of Kong in the jam band category. Their jazz-ish meandering improvisations accentuate a song’s strength, then break it down and take it somewhere else. Trying to guess where a song is headed becomes detective work on your part as you wonder where the band, “driving that train,” and you, the passenger, are headed.  The radio-ready version of “Truckin’” was around four minutes long, but the version on “Europe ‘72” clocks in at 13 minutes. “Dark Star” on the “Live Dead” CD is 23 minutes long. That’s a mess of meanders. How many bands fire up an Appalachian-type ditty that melds into complex layers of avant garde jazz, with perhaps a foray into a cacophonous space jam where you’d swear the Coliseum mothership is about to land on Venus, and a segue into a rollicking dance tune that brings every last person to their feet. And that’s all just one song!

Next, the covers. Dead & Company mines the layers of the great American songbook for songs that tell tales that have been told for decades, story songs that you never tire of hearing. Songs that trace the history of music from the Anglo-Scots Child ballads up to Philip Glass.

Dead & Company cover country music. Last month, PBS ran an eight-part, 16-hour documentary, “Country Music,” that was beautiful. In the event you didn’t get enough of “three chords and the truth” from watching it, Dead & Company may bring it to you in mid-November. “El Paso” by Marty Robbins, released in 1959, has just about everything you need in a cowboy song. It’s got a cantina, drinking, bad decision making, murder, horses, and death. It’s got everything in it except Mama.  (Note:  For a long time, Chris thought this song was about an interspecies relationship that went south; he thought the opening line was “Down in the West Texas town of El Paso, I fell in love with a Mexican squirrel.”) Merle Haggard’s “Mama Tried” has freight trains, bad behavior, prison, and Mama. Kris Kristofferson’s “Me & Bobby McGee,” became a posthumous hit for Janis Joplin after her death in 1970 has been a Dead staple (the prominent product, not the U-shaped piece of wire) since. It has no mention of Mama. Should you hear “Well I taught the weepin’ willow how to cry, cry, cry,” you’re listening to a Mama-less song released by “The Man In Black” in 1958. At some point there’s gotta be a Mama song, though, cause Mama tried.

Dead & Company are Dead-icated devotees of the blues, and their set lists are sometimes populated with songs that are as much as nine decades old. “Big Railroad Blues” was recorded by Gus Cannon in 1928. “I Know You Rider” was played in the 1930s. “Deep Elem Blues” was recorded in the mid-30s. Walkin’ Blues” was written by Robert Johnson and was first recorded in 1936. “Well I woke up this morning, feelin’ ‘round for my shoes, knew that I had them ol’ walkin’ blues,” certainly sounds like a harbinger of adverse things to come. “Goin’ Down The Road (Feelin’ Bad)” was recorded by Woody Guthrie, Cisco Houston & Sonny Terry in 1944. Dead & Company, like the Grateful Dead before them, are disciples of Dixon – Willie Dixon, bassist and prolific songwriter, who penned (or wrote longhand, cursively) “Little Red Rooster,” “Spoonful” and “Wang Dang Doodle.” Wang Dang Doodle invites you to what promises to be one heck of a party: “Tell Automatic Slim, tell razor-totin’ Jim, tell butcher knife-totin’ Annie, tell fast-talkin’ Fannie, We gonna pitch a ball, down to that Union Hall; We gonna romp and stomp ‘til midnight, We gonna fuss and fight ‘til daylight, We gonna pitch a wang dang doodle all night long.”

And finally, the ageless originals, original (to the Grateful Dead, and by shared genes, to Dead & Company as well) material that is so well-crafted that it sounds like it’s been here from jump. Here you are, listening to a set that contains a handful of country covers, and they slip some originals in there that fit so perfect, lyrically and musically, that you’d swear they were covers too. Hard to believe that “Mexicali Blues” is a Bob Weir/John Barlow composition & not a mid-50s gem from the Grand Ol’ Opry. “I been ballin’ a shiny black steel jack-hammer, been chippin’ up rocks for the great highway. I’ll live five years if I take my time, ballin’ that jack and drinkin’ my wine.” This is from a Robert Hunter song, “Easy Wind,” and it sounds like it’s a hundred years old, but hey, only half of that, it’s only 49. Robert Hunter recently passed away but will live forever on the lips of Deadheads who know the words to every song he wrote for the Dead. Listen to “Loser,” written by Jerry Garcia/Robert Hunter (it’s on 1981’s “Dead Set.”). “If I had a gun for every ace that I’ve drawn, I could arm a town the size of Abilene.” There are around 122,000 people living in Abilene, so that’s a lot of aces and firearms.

If you are looking for a pre-game before the November 9 show, or maybe just need a Grateful beer, St George Brewing on Challenger Way in Hampton is hosting a Grateful Day from 12-4 with Blind & Dirty providing the jams. Even if you didn’t score that miracle ticket for the show (anything under $100 would be considered a miracle by today’s standards), don your tie-dye and come on out to St George for a real good time.