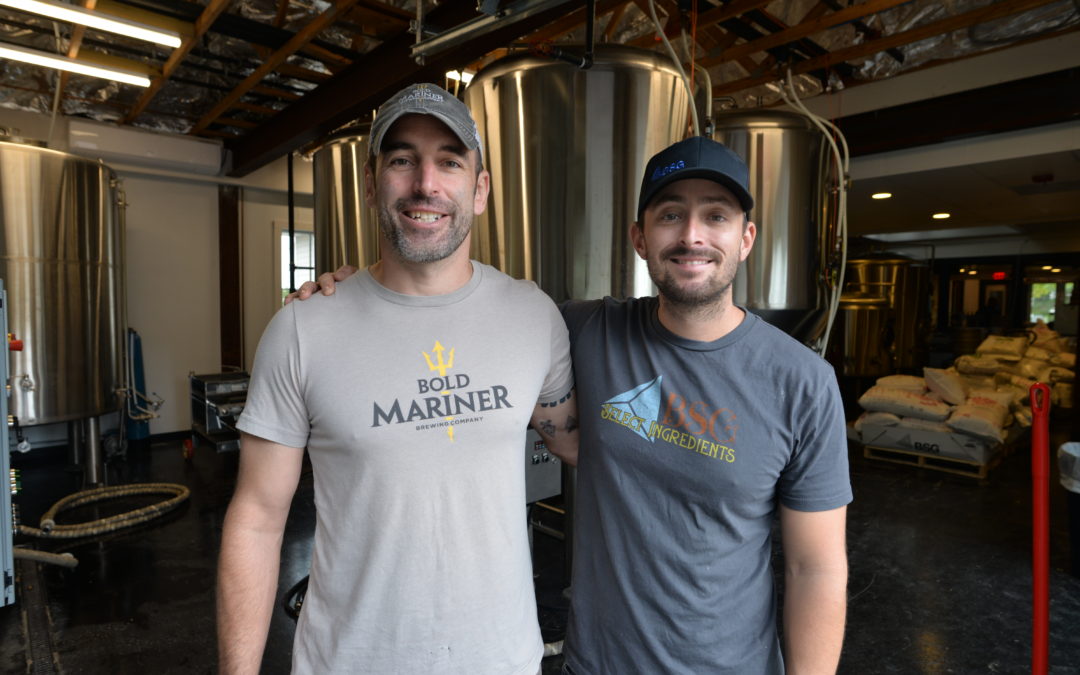 (Behind the scenes in the brewhouse: Michael Stacks and John O’Reilly)

There’s a famous proverb that proclaims “if at first you don’t succeed, try, try again.”

It can be said this was true for Michael Stacks, founder and president of The Bold Mariner Brewing Company, who was all smiles in late September during the ribbon-cutting ceremony of the craft brewery’s new location at 1901 East Ocean View Avenue.

Following a successful Kickstarter program, The Bold Mariner Brewing Company originally opened its doors in November 2015 in the Lambert’s Point section of Norfolk.  The craft brewery wasted no time in producing numerous award-winning beers such as Scurvy Dog and Red Maiden from its warehouse/tasting room location.

The popularity of the brewery among local residents as well as current members of the military and veterans maintained an adequate flow of patrons to the tasting room. Bold Mariner tap handles and cans of beer became available regionally in restaurants and grocery stores.

Still, Stacks wasn’t entirely satisfied. He had always wanted to operate his brewery in Ocean View, yet the stars were not aligned when it came time to select a location and a plan B option had to be implemented.

When Stacks was initially searching for a location in Ocean View he came across a former Bank of the Commonwealth building. It’s design was that of a large two-story beach house with wrap-around porches.

“We thought it would be the perfect place to put the brewery,” he said, “However, we were told there were other plans for the building and that it wasn’t available.”

One of the challenge aspects of basing a business in Ocean View are the zoning restrictions due to both commercial and military air traffic.

“There are only a few spots where you can put a business like a brewery in Ocean View,” Stacks said.

With his lease nearing a renewal point in Lambert’s Point, Stacks again looked to his dream idea and revisited the former bank. This time it was available for purchase. 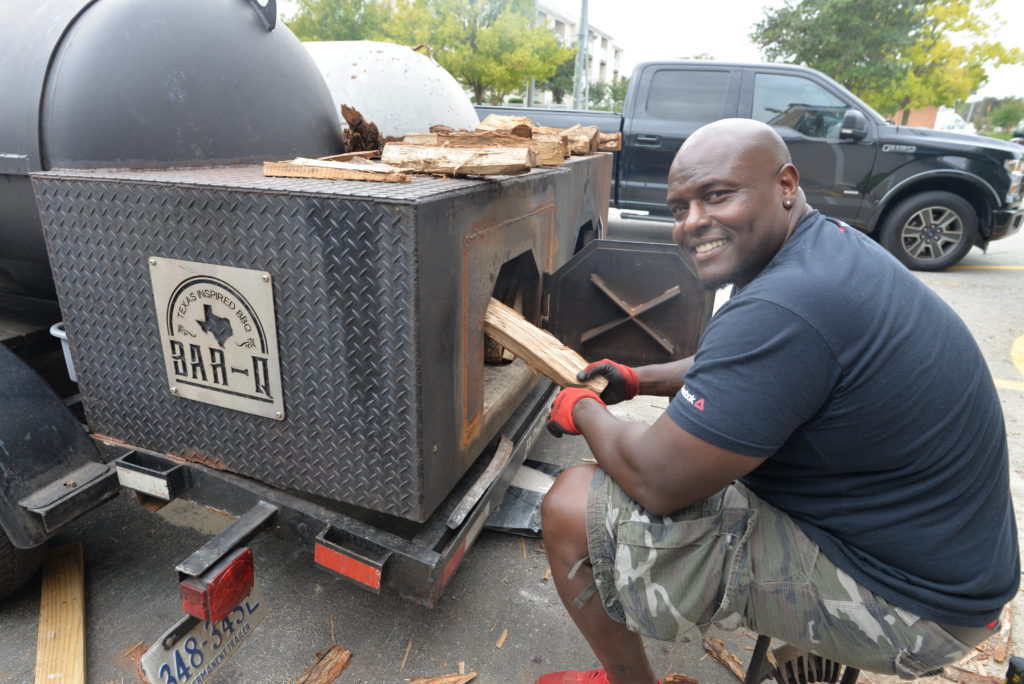 The full gamut of Bold Mariner craft beers are served on draft as well as seasonal and special one-off experimental variations and collaboration brews. Practicing a rising tide lift all boats attitude, several guest taps for other breweries as well as a guest cider and wine option are served.

Behind the bar, a large glass window allows patrons to view the operating brewery. Another side window view showcases the canning production line — a surefire hit for patrons with children.

The second floor of the tasting room is reserved for special events such as wedding receptions and retirement parties.

Head brewer John O’Reilly operates in the rear of the building. Bags of German malts are stacked in the center surround by ultra-clean fermenting tanks barely squeezed into the brewery’s extended section. The bank vaults of the original business were reworked to become walk-in coolers. All of the brewing equipment was moved from the old location to the new space.

“That was one of the biggest challenges with the move,” said Michael Stacks. “Getting the large 10-barrel system and 20-barrel fermentors — not just laying them down and moving them here, but standing them back up. It was challenging fitting all that equipment in the space. Our brewhouse only had one-inch to clear. It was a stressful day lifting everything in with three mechanisms. We had a lot of friends that provided some muscle too.”

Bold Mariner’s Ocean View move represents a brilliant change of course. With the previous location in close proximity to the numerous breweries in the Ghent neighborhood, Ocean View represents a golden opportunity in an under-served market of the city with thousands of residents living within a short walk or bike ride away. Stacks projects an immediate increase in taproom sales.

“It was great to see the support we got from the local community during the soft and grand openings,” said Stacks. “We absolutely think we’ll see an increase in taproom sales. That was the weakest part of our business in Lambert’s Point. The relocation is a great move for us.”

Smooth sailing ahead for The Bold Mariner. 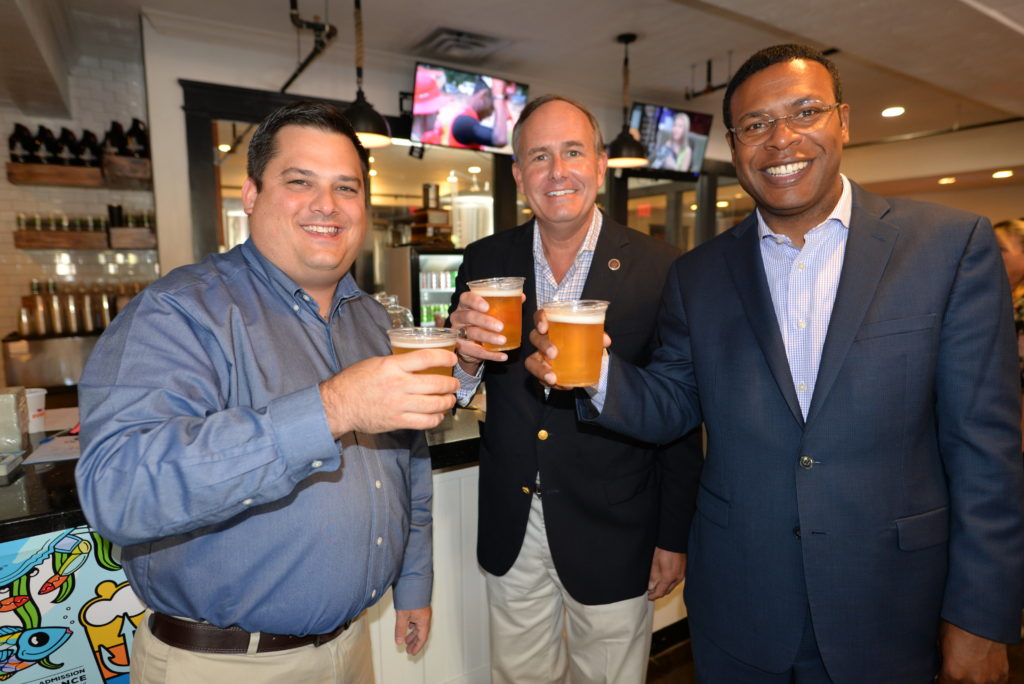