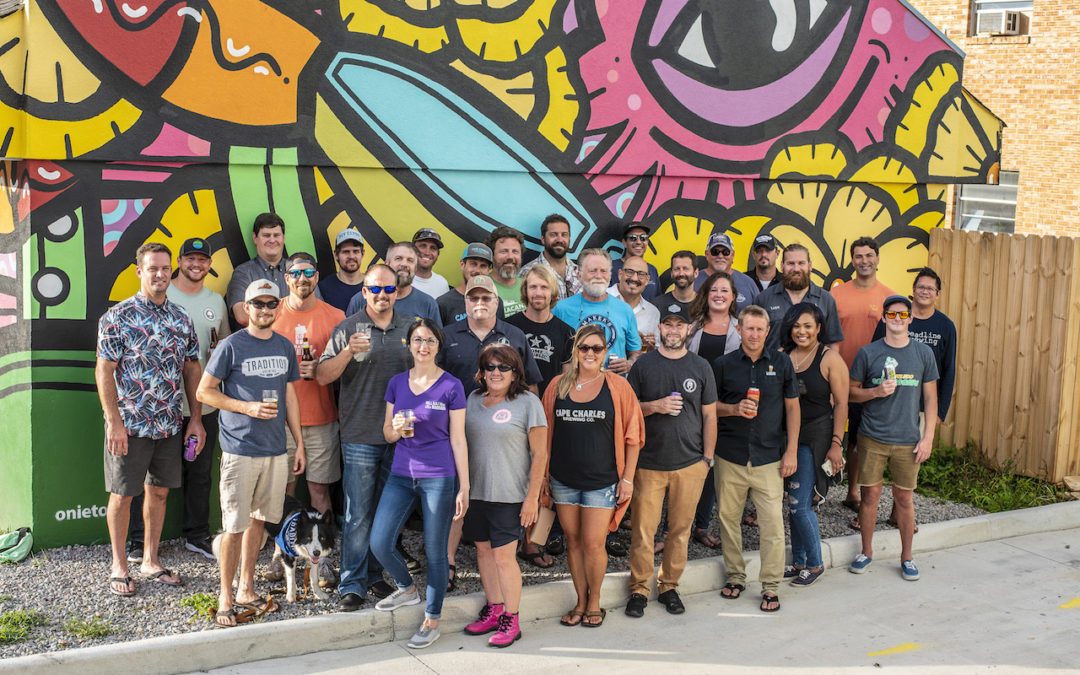 Heard of a food fight?

How about a beer fight instead?

More than 30 Hampton Roads breweries will be participating in this all-inclusive — beer and food — event where proceeds will benefit St. Mary’s Home, Hope House Foundation, and other local non-profits chosen by the participating brewers.

Breweries will compete in three categories: People’s Choice, Brewers’ Choice, and Battle of the Brewers.

For 2019, a partnership between Beach Ambassadors, Veer Magazine, and Virginia Craft Beer Magazine was formed to streamline and strengthen the area’s award-winning and only 757-exclusive beer festival.  “It just made perfect sense” said Shawn Fischer, Event Chair for Beach Ambassadors.  “These two publications really do an amazingly thorough job with both local craft beer and non-profit coverage.  They bring many benefits and abilities that we previously didn’t have to the table.”  “Both Veer Magazine and Virginia Craft Beer Magazine are excited to partner with such a community-minded, force-for-good organization as Beach Ambassadors,” said publisher, Jeff Maisey. “We are looking forward to enhancing the event with our many independently-owned craft brewery friends in the Coastal Virginia region as well.”

And what better location to wage battle than at a military reservation. That’s where this year’s 757 Battle of the Beers will be held — Camp Pendleton in Virginia Beach — for the second year in a row.

Camp Pendleton was constructed in 1912 and served primarily as a riffle range for the state militia. Today it is funded through and used for training by the Virginia National Guard.

Tickets include beer, food, games and more. Each brewery will be pouring two unique beers.

I recently caught up with Beach Ambassadors co-founders Shawn Fischer and Andy Beale to get the latest, pre-Battle intel. Here’s what they had to share.

VEER: How did the 757 Battle of the Beers concept come together?

Andy:  The concept came together over evening beer-storming, I mean brainstorming, sessions.  In late 2012/early 2013 craft beer was just starting to be a thing in Hampton Roads, and we saw how people were accepting of the movement early on.  There weren’t very many festivals out there that brought all the local craft producers yet, and we decided the timing was right to showcase local beer and raise some money for charity at the same time.  The first event was held in early August 2013 at Tapped Gastropub in Hilltop and Alewerks, Back Bay, O’Connor, Beach Brewing (now Reaver Beach), Smartmouth, St. George and Young Veteran’s were the first participants.

VEER: What was the feedback you and Beach Ambassadors received from both the participating breweries and attendees?

Shawn:  Feedback has always been overwhelmingly positive.  Admittedly, it gets harder and harder to differentiate ourselves from other festivals each year.  It was easier to impress patrons 6 years ago than it is now.  Most of the time, the positive feedback comes from our charity focus and the inclusion of all 757 brewers and not just those that are distributed by certain distributors.  Typically, any complaints come from the years when the weather was unbearably hot.  We now try to aim for a fall date.

VEER: How has the event evolved and has attendance increased?

Shawn:  It has always been about the growth of craft brewing in Hampton Roads.  In 2013, we had 7 participants….now we have more than 30 brewers and a cidermaker.  I have been around craft beer for over 20 years and never dreamed this area would support so many brewers.  Brewers of all sizes are thriving and a big reason for it is the fact that they actively participate in their communities.  Our event is a celebration of just that.  While I personally didn’t lead the charge in 2013, I’d think our focus back then was more on the charities.  Today, the focus is shared evenly between the charities and the brewers themselves.  For this reason, the brewers really support this event.  They attend and physically participate in the event which really isn’t the case for most festivals.  Two years ago, for our 5th Anniversary, we rolled out The Battle of the Brewers as a part of the event.  This “battle” is a fun way to get the brewers involved and to compete in something besides brewing.  We partner with Backyard Sports Club in a 3-round competition consisting of beer-themed games and trivia.  They really enjoyed it last year and hope to see it become even bigger this year.  The winner’s charity gets a chunk of the proceeds.

VEER: What’s new for this 7th Annual 757 Battle of the Beers?

VEER: The date of the event is different this year. What’s the benefit in having it in October?

Shawn: The brewers are really a big fan of us moving it to October. The cool temperatures will be popular.

7th Annual 757 Battle of the Beers