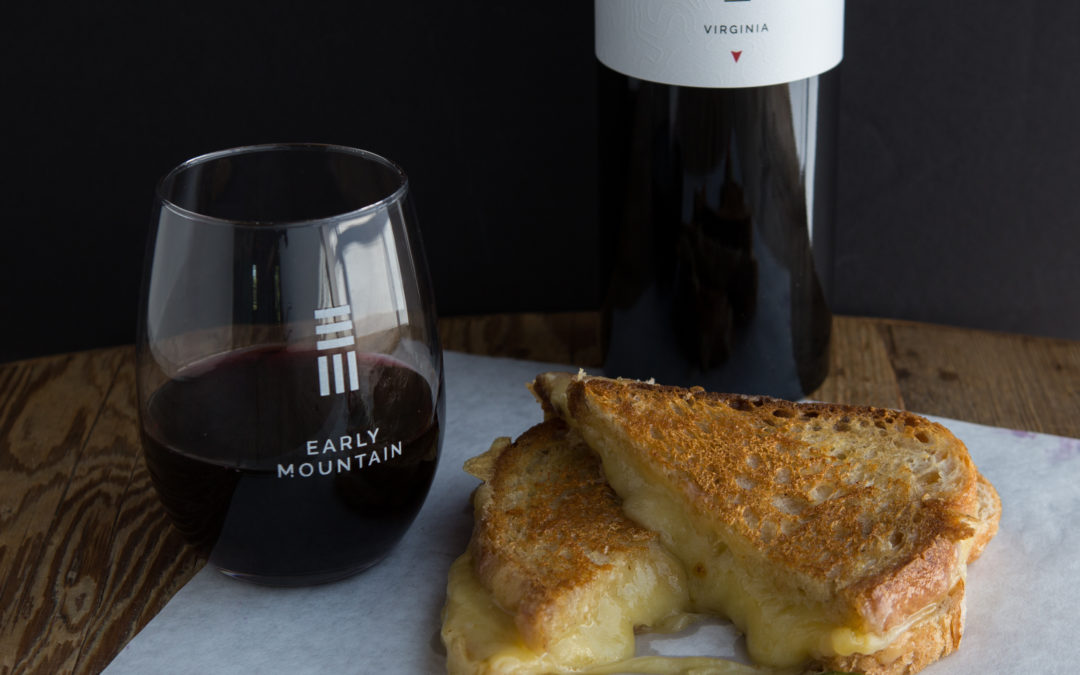 (Significant investments in new equipment and vineyard expansion at leading wineries such as Early Mountain are helping put Virginia on the map of great wine regions. Photo courtesy of Early Mountain)

Have you seen the bumper sticker proclaiming: Virginia makes wines. Napa makes auto parts. “I hate that,” says Annette Boyd, Director of the Virginia Wine Board Marketing Office. “Why would you knock a venerable wine region?” Especially since the California valley possesses the kind of reputation Virginia aspires to. Vision 2020, a blueprint for the Virginia wine industry, includes establishing the Commonwealth as the Eastern capital of the American wine industry (measured by premium wine sales).

It’s not the long-shot it once was. “The difference in caliber of Virginia wines in the last five years is dramatic,” Boyd says. Naturally, promotion is her job. But local wine pros agree.

“The overall quality of Virginia wines has been steadily improving over the past five to 10 years,” says Holly Corcoran of Taste’s wine team. “We’ve gone from a few select producers/winemakers to an expansive stable of industry professionals producing world-class wines.” Michael Shaps, Early Mountain Vineyards, Williamsburg Winery, Blenheim Vineyards, Chatham Vineyards, Rosemont of Virginia, and Pearmund Cellars are among those sold by the upscale specialty foods market/café throughout Coastal Virginia and Richmond.

Experts from further afield concur. A three-day trip through the Old Dominion inspired influential food-wine critic John Mariani to write for Forbes in April, “I found creditable reason to believe Virginia will rank with California, Oregon, and New York as a high-quality wine region.”

One of the highest profile cheerleaders is lauded chef and humanitarian José Andrés. Several years ago at a Wine Spectator event in Los Angeles, he paired RdV Rendezvous 2009 with an exotic mushroom dish. Attendees preferred the way the Virginia red crafted by former recon Marine Rutger de Vink matched it over a European vintage suggested by Spectator’s executive editor Tom Matthews. “Tom was like Holy Toledo! I need to see what’s happening in Virginia,” Boyd recalls.

What’s happening in Virginia, which rates nationally in the top six (five by some accounts) in number of wineries (312) and wine grape production (over 3,800 acres) is a wholehearted commitment to raising the bar on quality. With all of the industry’s excise taxes poured back into research, education, and awareness, the burgeoning Virginia wine industry benefits from not only Boyd and her team’s marketing efforts but also a viticulturist and oenology specialists through Virginia Tech. A concerted effort among them, vintners, and other major players has led to technological advancements in vineyard site selection, viticulture, and winemaking. “The evolution has been dramatic,” says Boyd. “Our learning curve has gone from 0 to 60.”

Because all great wines start in the vineyards, determining “what grows best where” is vital.

“About 70 grape varieties are cultivated for wine in Virginia in a diverse range of soils from the well-draining sandy loam of the Eastern Shore to the Davidson red clay soils of central Virginia to the granite-based soils north and west,” shares respected local wine writer Frank Morgan, creator of the online wine journal Drink What You Like. “It’s what makes Virginia so distinctive as a wine growing region.”

“Virginia wine is not a monolith,” confirms Neal Wavra, owner of Field & Main, a refined farm-to-table restaurant in Fauquier County numbered 13 last year on Washingtonian Magazine’s “100 Very Best Restaurants.” Virginians – reds, whites, rosés, sparkling, and sweet wines – comprise between 20 and 40 percent of his wine list. “More wineries are learning more about their sites, experimenting with grapes and vintages, and new wineries are learning from older players,” he says. “It’s led to exponential improvement.”

Wavra, who managed Ashby Inn in Paris, Va., with his wife Star before the couple opened Field & Main three years ago (they met at fabled Blackberry Farm in Tennessee), finds that travelers are eager to try Virginia wine because they’re interested in knowing what local is about, and millennials are open to it, but older clientele have a bias against it. They tried Virginia wine years ago, before current achievements and are justifiably wary. Wavra says he has to coax them, sometimes even trick them, into trying it.

Alex Basich, owner/sommelier/wine buyer at Noble Grape, a boutique wine shop in Chicago selling Barboursville wines, believes Cabernet Franc and Petit Verdot can lead the way to Virginia being known nationwide for world-class wines. Aileen Sevier, Director of Marketing at Early Mountain Vineyards in Madison County, says, “Cabernet Franc can be our Pinot Noir. It’s reflective of site.” And she, too, feels that Petit Verdot, traditionally a bit player in Bordeaux blends, can help put Virginia on the map, along with other lesser known wine grapes like Tannat and Petit Manseng, the latter rarely done anywhere else except Southwest France where it originated. “Petit Manseng is something we can own, and not have it compared to xyz,” she says.

Wavra feels that the pretty and elegant Viognier like that coming out of Loudoun, when done well, can “rival the best in the world.”

Ali Yakich, GM and sommelier at Deuxave, a modern French restaurant in Boston, applauds Virginia vintners for pursuing interesting varietals few others are doing. “They’re setting their own trends, not following others,” she says. She’s featured Virginia wines on Deuxave’s tasting menus, allowing her to describe them to often uninitiated guests.

Yakich at Deuxave also is impressed by the potent spirit of cooperation among wineries. “That’s something you don’t see everywhere,” she says. It’s not new. When Gabriele Rausse, vineyard manager to the Zonins, an Italian wine dynasty, was sent to Virginia last century to grow European grapes (at what became Barboursville), he shared his expertise with other area start-ups, leading to the dawn of the modern Virginia wine industry.

In the 1990s, when Barboursville’s now-veteran winemaker Luca Paschina introduced his wines to New York City tastemakers, he uncorked a couple bottles from neighboring wineries for them, too, promoting not just Barboursville but Virginia. Jim Law of Linden and the late, eponymous Dennis Horton, among other pioneering wine leaders, mentored many.

Such bolstering has only blossomed as Virginia wineries grow and coalesce around quality. “It’s hard to grow grapes here,” says Sevier of Early Mountain, whose wines are making great strides beyond Virginia’s borders, including being poured at Gramercy Tavern in New York City. “Success relies on everyone working hard.” She allows that it’s not that other regions don’t collaborate, but that it’s happening more here than in any other place right now because of timing. “It’s very exciting. It’s still the ground floor,” she says. “We’re where Oregon was 30 years ago, Napa 50 years ago.”

Sevier sees an organic bonding because of the kind of winemakers drawn to Virginia. What with land and weather not necessarily conducive to growing wine grapes, “It’s for people who want a challenge, who want a different vintage each year, who embrace artistry,” she explains. “There are a lot of regions where you can make wine if you want certainty and control. But that’s not Virginia.”

“Vintage variation is real and these wineries are flexible and creative on how they market their wines from year to year,” underscores Nicolette Anctil, sommelier at James Beard-awardee Sean Brock’s Husk Nashville which sources all ingredients from the South. “The community is so open to coming together and creating the best wine they can for that year.” Her wine list has included a number of Virginia wines such as Ankida Ridge Chardonnay and currently features Barboursville Vermentino by the glass. She adds, “Considering Virginia is the closest region to Husk that is making quality wines, we’d love to get our hands on some more options.”

Aiding its wine renaissance is Virginia’s allure as a four-season tourist destination, dense with rich history and varied landscapes all drenched in Southern hospitality. As Mark Oldman, author of “How to Drink Like a Billionaire” said in The New York Times, “Drinking wine is only part of its enjoyment. In order to truly appreciate a good wine, you need to make a pilgrimage to its source.” He then named Virginia’s Shenandoah Valley as one of his favorite emerging wine destinations.

Visitors from far and near can experience wineries throughout Virginia in different ways (often more than those in other states) because of favorable regulations. Beyond just bellying up to the bar for a tasting, folks can listen to live music or wed in a vineyard, enjoy a massage during Spa Day at Horton Vineyards or paddle a kayak to Chatham with Southeast Expedition’s “Paddle Your Glass Off.” A thousand people come for the biannual oyster festival at Early Mountain. “Many of them might never choose to visit a winery but they love oysters,” says Sevier. “It’s not just for wine drinkers who taste wine and geek out.” No wonder there’s been a four-year upward trend in wine tourism here.

“Virginia wine is moving in the direction of getting the top percent of ‘wine discovery’ people,” says Sevier. That means those who are looking for the next big thing. Alas, acreage and volume aren’t keeping up. And there’s the issue of distribution. Even with more wineries selling to major cities like New York and Washington, only five percent of Virginia wine was sold out of state last fiscal year.

Wineries are tackling the problems head on by making significant investments in new equipment and vineyard expansion. Morgan spotlights wineries including Afton Mountain Vineyards, Early Mountain, Barboursville, and Rosemont of Virginia as exemplars.

With the critical acclaim of Virginia wines building, Veritas Vineyard & Winery in Afton recently launched a new label, True Heritage, a collective of historic estate farms that helped define America’s original wine region. The name gently points out that Jamestown settlers planted vines in 1609, more than a century before missionaries began doing so in California. True Heritage is focused on wider distribution and, ultimately, the international market.

So if you haven’t tried Virginia wine recently, you haven’t tried Virginia wine. Paschina, whose Barboursville wines were the first from Virginia distributed nationally and today appear at celebrated restaurants including Momofuku Ssäm Bar in New York, AAA five-diamond Fearrington House in North Carolina, Amara at Paraiso in Miami, and Michelin-starred Washington, D.C., restaurants Masseria and Blue Duck Tavern, urges his fellow Virginians, “While visiting a restaurant, kindly complain if Virginia wines are absent on the list. There are still too many not endorsing them for no good reason. Please drink local.” After all, Virginia isn’t just for lovers. It’s for wine lovers.