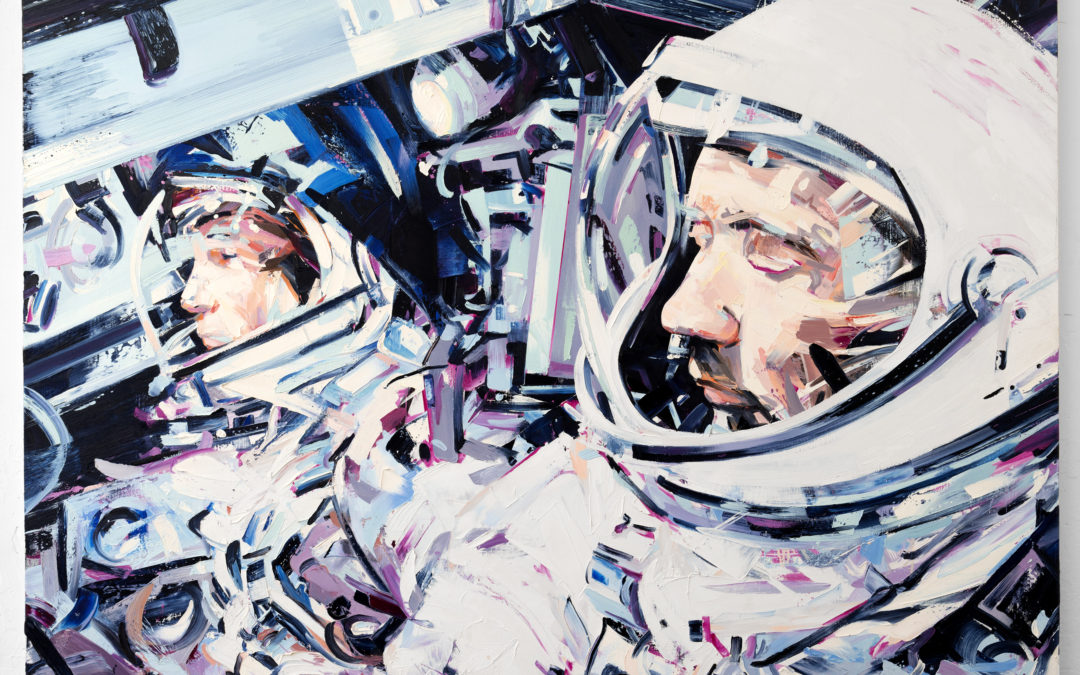 Michael Kagan’s With All The Fucking Force (2011)

If pop star David Bowie were alive today we can only assume he’d have a strong interest in the paintings of Michael Kagan.

Bowie, like many recording artists of the late 1960s and early ‘70s, was seemingly obsessed with America’s landing on the moon — 50 years ago — and the possibilities of space exploration that seemed abstract and yet very much a reality.

Bowie fantasized in the assumed persona of Ziggy Stardust about outer space in such songs as “Star Man,” “Space Oddity,” “Moonage Daydream,” and “Life on Mars.”

Flash forward to the year 1980, and Michael Kagan was born in Virginia Beach. As a youngster and into his adult years, Kagan was surrounded by technology and the space industry, living in close proximity to NASA Langley and the Air & Space Museum in downtown Hampton.

Kagan left his hometown to study painting and received his MFA from New York Academy of Art.

Over the past ten years his work — often based on NASA photographs and reinterpreted on canvass with brushstrokes of paint — has been exhibited far and wide in gallery settings. He’s also worked on projects with Pharrell Williams’ Billionaire Boys Club.

On September 20, Virginia MOCA will present the opening of the first-ever museum exhibition of his work in a show titled “”I Was There When It Happened.”

Virginia MOCA will be publishing an accompanying book of Michael Kagan’s work — a first for the artist — which will be sold on opening night and afterwards in the gift show. The book will be distributed Internationally as well. Pharrell Williams wrote the introduction.

The exhibition is curated by Alison Byrne, who is also MOCA’s director of exhibitions and education.  I recently met with Byrne for a behind-the-scenes tour of Kagan’s artwork, which was still stored in the environmentally controlled backroom a ready for liftoff.

When did you first become aware of Michael Kagan’s artwork and why did you feel it would be a great exhibition for MOCA? Is it in any way also connected to the 50th anniversary of the moon landing?

Michael was born in Virginia Beach, which piqued our interests immediately because we always like to see what artists born and raised here are doing in the world.

So we started visiting Michael’s studio four and a half years ago; every time we were in Brooklyn we’d go and visit, and see his work. Every time he was in Virginia Beach he’d come and visit.

We knew we were going to work with him at some point, it just about the right timing for both his work and for MOCA.

It definitely does align the timing with the Apollo 50th anniversary.

Michael has been pretty much obsessed with space and technology from when he was a little boy. He talks about growing up here in Virginia Beach; being close to NASA; going to space camp with his dad; his dad was really into astronomy so they looked through telescopes a lot.

It’s sort of that idea of what you can do inside of these amazing pieces of machinery.

For us it was all of that — plus he’s just such an interesting painter. He uses paint in a really fascinating way with these square brushstrokes that he uses. When you get up close you can see all of these small individual abstract paintings, and then you step-back from the piece and it kinda falls apart and comes back together to make the image it actually is.

If you see some of the original images that his work is based on it’s really interesting to me to see how he he decides what to focus on. Some of the astronauts in the show he’s cropped-out the American flag, and what you see is the sliver of reflection from the visor of the astronaut. It’s sorta the story that’s untold that leads the visitor to be able to put those pieces together.

With his cockpit paintings you feel like you can get into that cockpit and take off.

There’s one that feels like a “Star Wars” moment because of the colors.

He works very large in some instances so there are some larger than life-size astronauts.  If you think about walking up to that painting you kind of feel like what it must have been like for that astronaut on the moon.

With such an interest in space and going back to the moon this exhibition feels incredibly timely.

As a curator, can you share with us how such large paintings should be displayed so that the viewer can both step back and experience the painting from a distance as well as up-close?

One of the beautiful things about MOCA is that our gallery space has movable walls. My colleagues and I work in Sketchup (Pro), and with each new exhibition we really take the work and decide — from the visitor’s perspective — how they will walk through the space, and what walls we either need to bring in or what walls we’ll need to remove.

With Michael’s work, because a lot of the works are quite large, we do need the space. Walls create pathways, but there also are very large open space you can step-back and take-in these amazing works.

Most of Michael Kagan’s works make use of grays, whites and blues. All of the walls in this exhibition you’ve had painted a dark gray. Is your background color choice for the purpose of being neutral and yet complimentary to the artwork?

One of the big things for me is that Michael is exhibited internationally, but they’ve all been gallery shows. Very prolific gallery shows, but this is his first museum solo exhibition, and in the life of an artist’s career that’s very important.

Every gallery show he has had the walls were painted white. It was really important to me that this show stood out. When the show is photographed and this exhibition is shown around the world online it is important that it stood out.

It is important to us as a Virginia Beach institution to give that first solo show to an artist born and raised here.

With galleries the art is for sale. Will the pieces exhibited at MOCA be for sale or just display?

The works are not for sale. Most of the works from this exhibition are coming from private collections all over the world, and that’s also really special.

The exhibition looks back at the past ten years of his career and bringing back the best of the best painting together.

That means going to individuals all over and introducing yourself and what you’re doing.

As collectors, Michael has a really supportive group who want to see his career furthered and are therefore very interested in lending the work.

We have a piece coming the UK. That piece is actually a 12” X 12”; it’s the smallest one but very famous because it was the vinyl cover of the year in 2013 for the White Lies. When that band was touring it was their background (on stage).

We have two large-scale astronauts coming from Tokyo.

I think that aspect is fascinating for visitors to understand. As curators it is your job to contact the collectors and organize the logistics of getting the work delivered for exhibition, right?

I have an amazing exhibitions team. So, yes, I would do the initial ask and get that relationship with the lender so that hopefully they’ll trust us to loans these amazing works of art, but then our registrar will do all of the loans; we work with fine art shipping companies. It is a real coordinated effort.

When the person in Tokyo loans a work for the exhibition, do they receive payment normally or are they loaning the work for goodwill?

In terms of abstract painting, can you talk about how Michael’s style compares — in your view — to those of other, more famous abstract painters?

I think he really straddles that boundary between abstract and figurative. They’re definitely based on content that is recognizable to the visitor, but it’s not a literal representation. That’s where the beauty really is.

You can look at his work and admire the brushstrokes, the color scheme, but then equally you’ve got that content which I think makes it really rich.

“Michael Kagan: I Was There When It Happened”