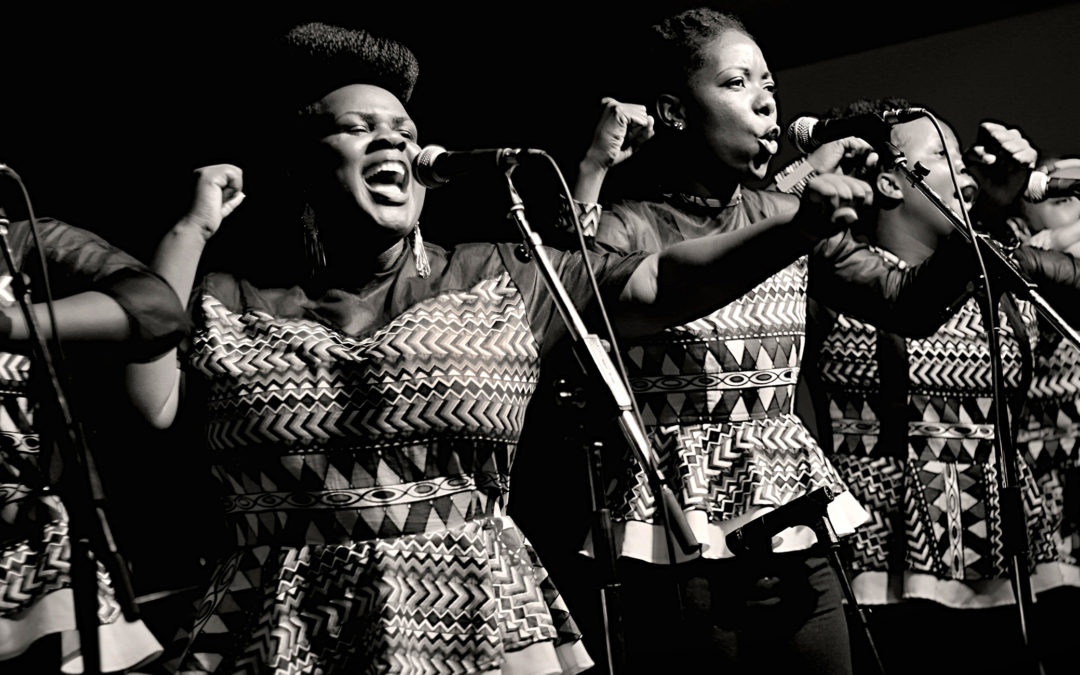 The first-rate Attucks at100 celebrations continue with a performance by Nobuntu —  a female vocal quintet from Zimbabwe that has been taking the arts world by storm.   Norfolk is their first stop on this new coast-to-coast tour of the United States. This remarkable quintet,  revered internationally  for its inventive performances and hailed as “an eruption of cross cultural joy” is a must for your fall season. They will be here bringing their irresistible harmonies and beguiling rhythms to the historic Attucks Theater on Saturday, September 21.

The purity and power of the five voices  without amplification and the synergy created by the subtle use of traditional percussion instruments coupled  with authentic dance movements make for an unforgettable experience. The percussion instruments — or backing — include the Mbira which is the classic thumb piano made of wood and tin  and the hosho  — a gourd full of seeds which when shaken makes a mesmerizing and distinctive sound. Both of these instruments originated in Zimbabwe as did the musical genre — Afro Jazz.

Nobuntu is more of a concept than a simple word, name or title.  As is true in many different languages, one word can represent multiple ideas and ideals. In this case  the values of humility, love, unity and family connections from a female perspective. These five talented women are now at the pinnacle of their careers and having a grand time celebrating while preserving their native culture and beauty. Their basic mission encompasses the firm commitment and belief that music and art in general are an important and sometimes overlooked vehicle for change. Nobuntu personifies and exemplifies the concept that all of the arts transcend racial, tribal, religious, gender and economic boundaries.

Nobuntu’s not to be missed performances are full of joy; their signature harmonies and rhythms bring to life centuries old traditional songs  which will have you clapping your hands and stomping your feet. Their diverse repertoire ranges from the folk traditions of Zimbabwe to gospel and Afro jazz and jazz.  Afro Jazz is to the countries of South Africa, especially to Zimbabwe where it originated, what jazz is to New Orleans. Both genres were being formed at virtually the same time in the late 19th and early 20th centuries, even though continents and oceans apart.

As with many cultures of indigenous peoples, the music of Zimbabwe embodies the very soul of the land and its people. Ever since the early 1300s, Zimbabwe has been a major trading and migrant center. There are 16 different languages spoken in Zimbabwe – the two most used being English and Shona. In fact, the name of the country in Shona means House of Stones and in the early 20th century, Zimbabwe was known as the Jewel of Africa. It is a land replete with such treasures as diamonds, gold and rare minerals including platinum and lithium. In other words, ripe for colonial type takeover – or these days, communist “investment”. Formerly known as Rhodesia, Zimbabwe was a British colony until the 1960s.

And as was the case with many of the former colonies, Zimbabwe has gone through a turbulent last 150 years or so. The nation of just over 16 million is landlocked by the Zambezi and Limpopo rivers  has seen, since “independence”  white supremacist and black supremacist governments both of which were condemned by the global community for abuses of basic human rights.

But, thank goodness, the music and culture of the original peoples survive and bring an incredible sense of joy and love to our sometimes more than frightening world experience. The powerful and pure sounds created by Nobuntu are the result of years of hard work and dedication. Formed in 2011 Nobuntu’s  five ladies grew up in the same city ,knowing  each other since their high school days. They started giving concerts at festivals, gatherings and celebrations throughout their native country and found success quickly.

Reflecting on their growing international fame, Duduzile Sibanda says with a huge smile: “We have grown closer by traveling and performing together. We have a lot to share and it helps us really work for unity and friendship.” She continues: “We have all changed through the songs we sing. My favorite is the traditional Zimbabwean music. We have so much to share through it.”

Now performing at leading venues all across the African continent, Europe and North America, Nobuntu continues to reap accolades. In the past couple of years  they have wowed audiences in Italy, Austria, Germany, Belgium, The Czech Republic and across Canada.  Nobuntu was nominated for the Best Musician of the Year at the Zimbabwe International Women Awards in London in 2015 and is the only tow time winner at the Bulawayo Arts Awards They have released three highly acclaimed  recordings .

“We hope to use our music in order to advocate for mutual respect, peace, love and an end to abuse around the world,” Sibanda said. “We matured, discovered more about ourselves and where we come from. It’s a humbling experience that also allows us to learn about the traditions of our culture and how they impact us today.”

Nobuntu’s performance is just one of the impressive and appealing events coming up at the Attucks Theatre.  Often referred to as the Apollo of the South, this historic and beautifully restored theatre is on Church Street in downtown Norfolk.