Guys & Dolls is the Perfect Musical 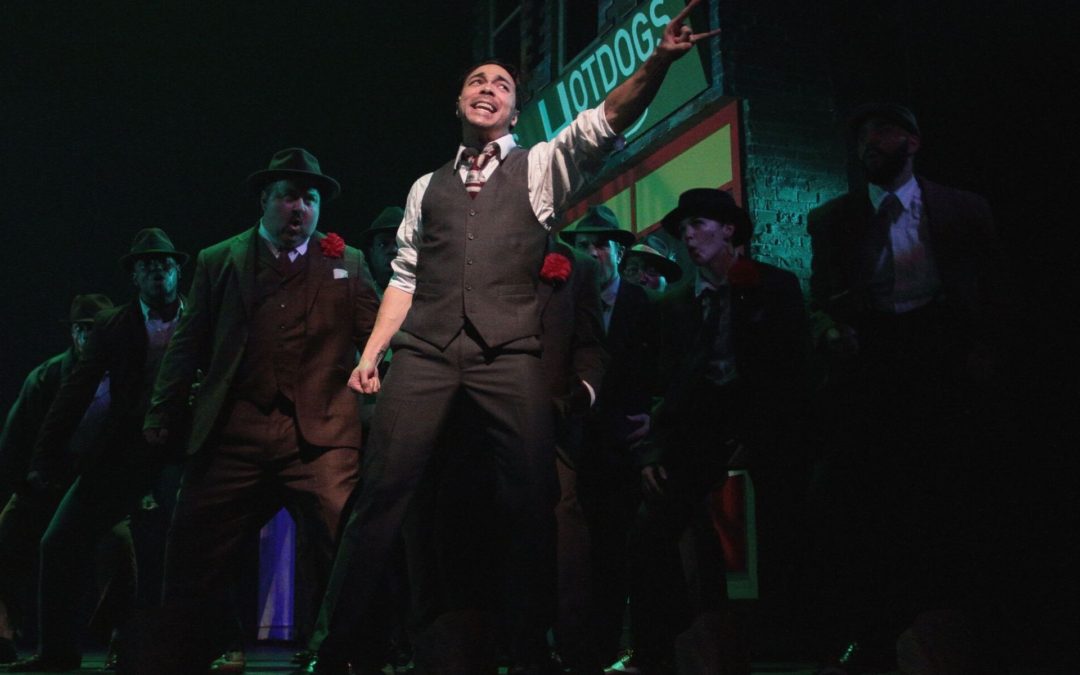 “He always brings me in for comedies,” says director Nicolas Minas, with a bit of a chuckle, in response to my question about how he was selected to direct Guys and Dolls, the Tony Award-winning Broadway musical that launches Virginia Stage Company’s impressive 41st season. Turns out that Nick and Tom Quaintance, VSC’s producing artistic director, go way back…just a few years back really, to when Tom was the artistic director at Cape Fear Regional Theatre. Nick directed multiple well-received musicals and comedies there, including Arsenic and Old Lace and Avenue Q. They’d agreed some time ago that Guys and Dolls would be an ideal first show for Nick to direct here at the Wells.

“I thought Guys and Dolls would specifically look really great in here because of the old history of the theatre and the way that it is,” Nick later says. The decision for this classic, huge Prohibition era musical to launch season 41, a season that follows the historic and heavily hyped 40th season of the company, was made in large part to kick the season off with a show that would easily appeal to local theater patrons.

“The whole subscription model is to get people to come see shows that they wouldn’t normally come see,” explains Brad Tuggle, VSC’s director of marketing, who is leaving the company soon for another opportunity. “Our goal is to get people in the door for Guys and Dolls, and have them come back and push themselves with the shows for the rest of the year.” This will be Brad’s last show with the company, and he’s leaving some really big shoes to fill.

It’s the middle of a work week in September—a couple days before Hurricane Dorian impacts the region, and Brad has joined me inside the Wells Theatre lobby, with the aforementioned Nicolas, and two of the lead actors in the show, Casey Shuler, who plays the righteous Sarah Brown, and Sam Simahk, who occupies the iconic role of Sky Masterson. The cast and creative team are in their second full week of rehearsals, with previews beginning in just two weeks. The cast of 25, which is on the larger end of the spectrum for professional regional theater, represents a nice mix of local talent, working alongside NYC caliber actors, many of whom have appeared in Broadway shows.

“The thoughts and dreams that you have in your mind as a director…change, when you have the people, because it brings it to life in a new way,” Nick says. “For this production, I thought it would be interesting to take it back to the original source material. Set it in the prohibition era, where it makes the most sense, because that is what is really being talked about… It’s a time when burlesque was at its height in New York City.”

Guys and Dolls is based upon short stories written by Damon Runyon, specifically “The Idyll of Miss Sarah Brown,” and “Blood Pressure.” Runyon was a famous fiction writer whose short works explored the lives of gamblers, gangsters, and the like, in a Prohibition era New York City of the early 20th century. The book for Guys and Dolls was written by Jo Swerling and Abe Burrows, with music and lyrics by Frank Loesser. The musical premiered on Broadway in November of 1950, and ran for well over a thousand performances. It would go on to win 5 Tony Awards the following year, including Best Musical and Best Direction of a Musical, which went to George S. Kaufman.

Since that original production, there have of course been major revivals of the classic musical, including the hugely successful 1992 Broadway revival which starred Nathan Lane as Nathan Detroit. It ran for nearly 3 years and won 4 Tony Awards. There was a film version released in 1955 which starred Marlon Brando, and the musical has been a staple of regional companies for decades now. Musical numbers like “If I Were A Bell” and “Luck Be a Lady” are standards in the musical theatre lexicon.

The two-act musical, which is hilarious with its zingers and features some of the most impressive song and dance numbers ever performed on a Broadway stage, tells the story of Nathan Detroit, the infamous craps game organizer, and his relationship with his long suffering fiancé, Adelaide. And then there’s the unlikely relationship that develops between Save-A-Soul mission leader, Sarah Brown, and the enigmatic gambler, Sky Masterson. There’s a bet that drives the plot, and other colorful characters that feature prominently, including Nicely-Nicely Johnson.

For VSC’s production of Guys and Dolls, Nathan Detroit is being portrayed by Brian Ray Norris, while Jessica Lee Goldyn plays Miss Adelaide. Nicely-Nicely Johnson is being portrayed by the talented James T. Lane. All of these actors are new to Virginia Stage Company, as are the aforementioned Casey Shuler and Sam Simahk. Casey tells me during our interview that she wasn’t particularly familiar with the musical growing up.

“I didn’t really know Guys and Dolls before auditioning for this show,” Casey says. “What’s interesting about playing Sarah Brown, for me, is that it’s not something that I ever thought I’d do, because it’s not naturally the way that I sing, or classified myself as.” When she read the script though, she fell in love with the character. “She’s smart…scared, she’s a lot of women in today’s society, and she has this amazing character arc that I was so excited to jump on…”

For Sam, Sky Masterson was a dream role, but also one that he didn’t think he would get to play. “I’m Asian-American. It’s only in recent years where some of this casting has opened up to people of color,” he says. That aside, Sam and his director have really worked to find a deeper portrayal of the iconic character. “I think the difficulty that some people find in this role, is finding the sensitivity in a character like Sky Masterson, because it’s easy to default to the Dick Tracy, film noir coolness,” Sam earlier explains.

That sensitivity is apparent in Sky’s song, “I’ve Never Been in Love Before,” which speaks to his unexpected love for Sarah. “What we’re working on, is finding a journey in that song,” Nick says. “It’s the first time that he’s ever said that, and that’s not easy.” At the heart of its glitz and highly stylized dance numbers, Guys and Dolls is indeed about love.

“Ultimately, it’s about love. It’s about people who come from opposite walks of life, who find each other and discover that they love each other, despite those differences,” says Nick. “It just gives you what you want when you go to see a musical.”