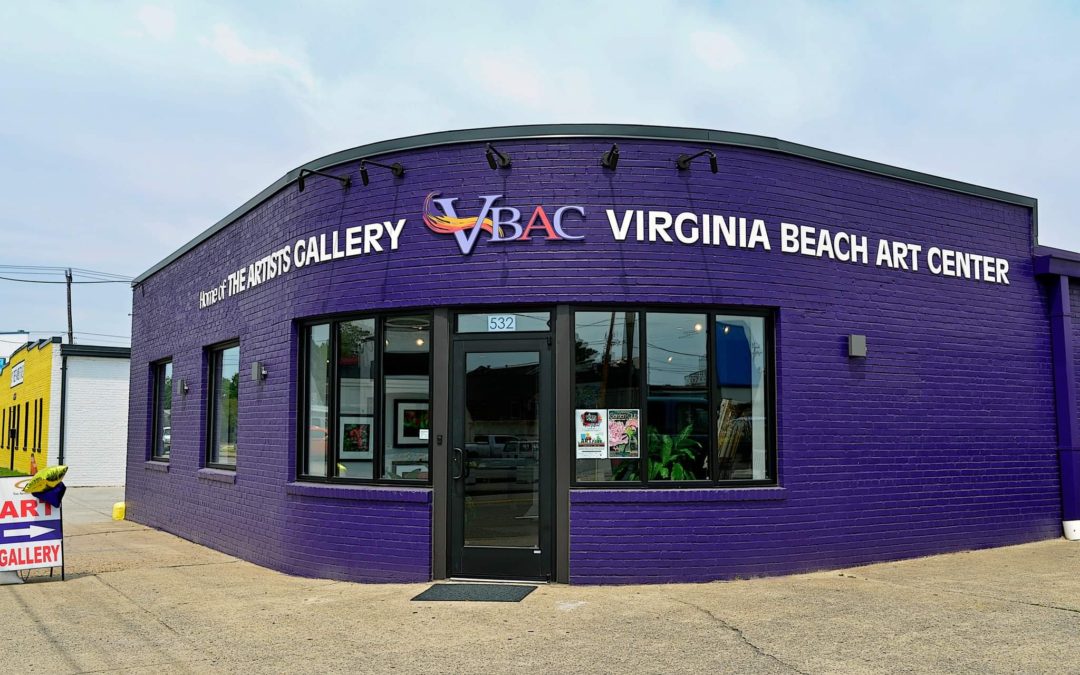 Not to be confused with the old Virginia Beach Center for the Arts which, over the past few decades, evolved into MOCA, the Virginia Beach Art Center (VBAC) is its own thing, though a similarly long time in coming.

VBAC’s home, a beautiful 6,000 square foot space in the ViBe Creative District, was worth the wait.

This 501 (c) (3) organization is set to fulfill its mission of offering “an educational and supportive environment to inspire people of all ages and skill levels to experience, engage with and create art” by virtue of variety of classes for all ages and by serving as the nonprofit umbrella organization for the Artists Gallery Cooperative and what was formerly the City of Virginia Beach’s Pottery Program.

Members of the Artists Gallery are pinching themselves at their good fortune which, as the saying goes, is another term for hard work.  According to Constance Fahey, their current director who has been a driving force since its inception, today’s iteration began some 30 years ago as five artists renting space at 2407 Pacific Avenue under the moniker “The Working Space.”   They practiced their craft there for 17 years before becoming “homeless” when the landlord “lost the gallery in a divorce.”

Then c. 2000, the group moved into 608 Norfolk Avenue, leasing gallery space which they built-out themselves.  Recalling that “everybody wanted to help us,” Fahey laughs about the tactics for which she became well-known. “I would say ‘come on over for wine and cheese, but will you first take this load out to the truck?’”

It evidently worked because they now occupy sun-drenched storefront gallery space and nine shared studios rented from VBAC.   With a small paid staff and 50 artists at three levels—resident, exhibiting, and invitational—they have successfully mounted their inaugural show in the Brock Gallery.  The July 5 opening reception for this regional juried exhibition entitled, “Fusion Mid-Atlantic,” was SRO.

Based on its success, the Artists Gallery plans to host more regional shows, along with student and teaching artists shows, as part of its annual 10-exhibition roster.  Events like book and movie clubs and art talks are also part of their offerings.  On August 17, artists and art lovers alike are invited to participate in “In Plein Sight—Plein Air Paint Out” from 9 a.m.-4 p.m. followed by a reception and Wet Paint Sale that evening from 6:30-8:30 p.m.

The Pottery Studio was one of the City of Virginia Beach’s most beloved programs for a small, but loyal, following at the Lynnhaven Recreation Center.  The program was disbanded a couple of years back, the result of a study that recommended no specialty programs at any one rec center.  The equipment was stored and the “huts” which housed the program raised.  But with the advent of VBAC, the program, now independent of the City, once again has a home, this time with soaring ceilings, expansive windows, a kiln room with at least eight kilns, and a massive storage and prep space.

The previously stored ceramic equipment was delivered “in a pile” to VBAC where volunteers and instructors set it all up as a proper studio.  Managed by Melanie Sweeney, the first set of classes was offered in May to 29 students—just one short of the goal of 30—by four instructors.  By this summer, the program had grown more than 20%.

VBAC itself emerged after some four years of planning.  Many people played instrumental roles, including Emily Labows, VA Beach’s Cultural Affairs Director, and Kate Pittman, the ViBe’s Executive Director.  Just a few of the other key players include architect Jeremy Maloney of Altruistic Design who provided his services gratis; Vinnie Bumatay, Artists Gallery Manager who conceived of the layout and overall plan; Bill Campbell, VBAC board member and Past President, who dealt with signage and permitting; and Elizabeth “Buzzy” Hamberg who kept an eye on Pottery Studio concerns such as power and ventilation.

But, anyone in the know would echo Artists Gallery president, Kay Hofler’s, assertion about VBAC’s tireless champion, the late Jean Rawls: “We would not be here if it wasn’t for her.”  Rawls, a retired high school art and art history teacher, practicing artist, and former member of the Arts and Humanities Commission, lived barely long enough to see the result of her leadership come to fruition.  As Chair of VBAC, she gave a report to the board on June 4, was hospitalized unexpectedly on June 6, and passed away on June 18.  Hundreds of friends, family members, and supporters mourned the passing of this powerhouse and celebrated her life on June 25 at a service held at MOCA.   A memorial exhibition of her work at Sandler Center is in the planning stages.

Reflecting back, Hofler recalls that “we wondered if we could raise even $10,000” to make VBAC a reality.  Under Rawls’ leadership, the organization raised $400,000.  Maggie Kerrigan, who succeeded Rawls as Chair, praises her fundraising ability.  “Jean understood how to do a capital campaign: to implement a systematic approach to finding the right people and then talking to them.”  Adds Hofler, “It is so important for people to realize that Jean built this for the economic and cultural development of the City.”