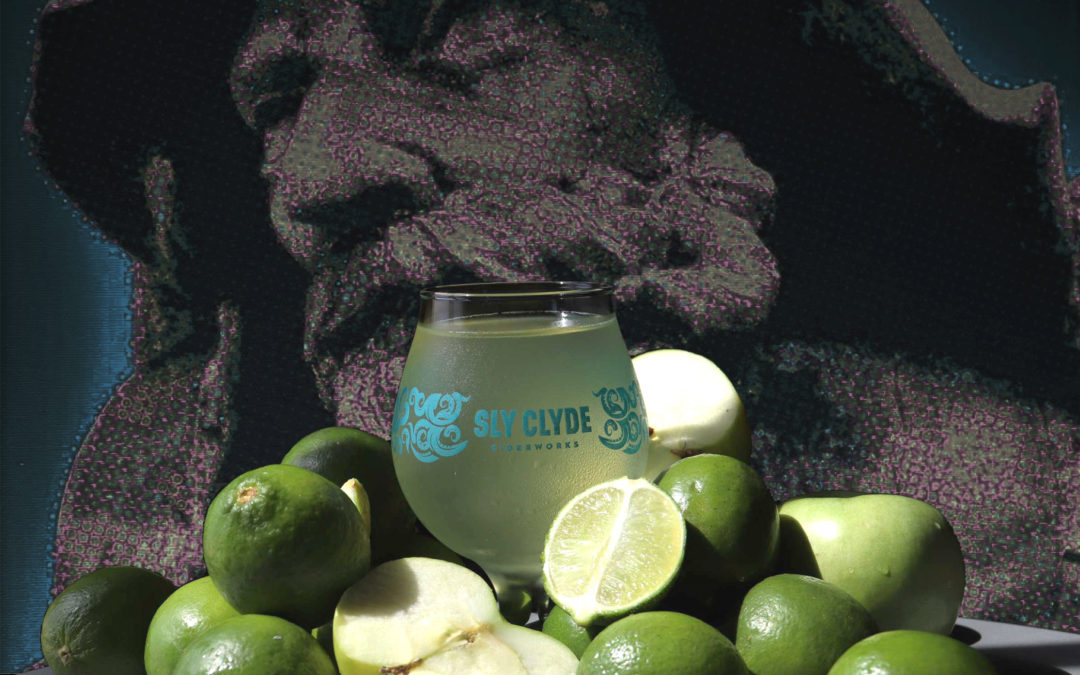 Releasing a lime-flavored cider in the middle of a July heat wave wasn’t just a sly move—it was a Sly Clyde move.

“The idea was just to be a summer refresher,” said Patrick Smith, who succeeded Brent Miles as Sly Clyde Ciderworks’ head cider-maker in February. “It kind of worked out well that we released it right in time for this heat wave.”

Unlike Sly Clyde’s other ciders, most of which are sweetened with cane sugar, the flavor for “Lime of the Ancient Mariner” comes from wild heirloom agave nectar. “It’s kind of somewhat inspired by a margarita,” Smith said, “in the sense that it’s got a lime flavor—a lot of citrusy character from it.”

Feedback so far has been “overwhelmingly positive.” “Everybody seems to really enjoy it,” Smith said. “In fact, we had a couple that already were telling me: ‘You can never get rid of this.’ It’s their favorite thing. We get a lot of that.”

Smith, an Army brat who grew up mostly in Fredericksburg, earned a bachelor’s degree at Virginia Tech and a master’s at Virginia Commonwealth University before settling in Louisville, Kentucky, where he owned a craft beer bar and founded Mile Wide Beer Co. He eventually burned out. “The beer scene changed a lot over the past decade,” he said, “and I just was losing inspiration and kind of ready to move on.”

He took a cider production course at Cornell University—studying under the world-renowned Peter Mitchell—and worked briefly as an insurance adjuster in Florida before returning to Virginia for the job at Sly Clyde. “It only took me a few months sitting behind a desk,” he said, “to realize I needed to get back into what I do best.”

While the science of fermentation is the same, Smith said the difference between making beer and cider is that the art comes on the back end. “In cider-making,” he said, “we ferment to total dryness and then add a little bit of sweetness back in to make it palatable—or to whatever your desired sweetness level is.”

At Sly Clyde’s, that sweetness level is lower than some customers expect. In other words: Don’t expect an overpowering flavor like a McKenzie’s Hard Cider.

“I definitely aim for more on the side of subtlety than ‘pound you in the face with whatever the flavor is supposed to be,’” Smith said. “We want it to be present, but we don’t want it to be overpowering. We work very hard to have clean, efficient fermentations, and we want you to be able to taste the fermented flavor of the apple because it truly is unique.”

The Sly Clyde staff has had to educate some customers who have expected their ciders to taste more like apple juice.

“Wine doesn’t taste like grape juice,” Smith said. “You’re creating some characteristics and some body some complexities through the fermentation, and we want that that to shine through—even in the flavored ones—but we also don’t want it to be so subtle as to not be present. So it’s always a balancing act.”

It’s an exciting time to be in the cider industry—and especially at Hampton Roads’ only dedicated cidery. “I feel like it’s a little bit more wide open,” Smith said. “There’s less structure; there’s less categorization. It’s almost like the early days of the craft beer scene, where it’s just like, ‘Let’s try different things and be free to experiment.’ … I’ve been really enjoying just kind of trying different things, trying different pairings that maybe wouldn’t work well with beer, but I have a medium now that we can try those kind of things out.”

Sly Clyde Ciderworks is located at 207 E. Mellen St. in the Phoebus section of Hampton. The cider will celebrate its one-year anniversary on Aug. 24. For more information, visit SlyClyde.com or call 757-755-3130.