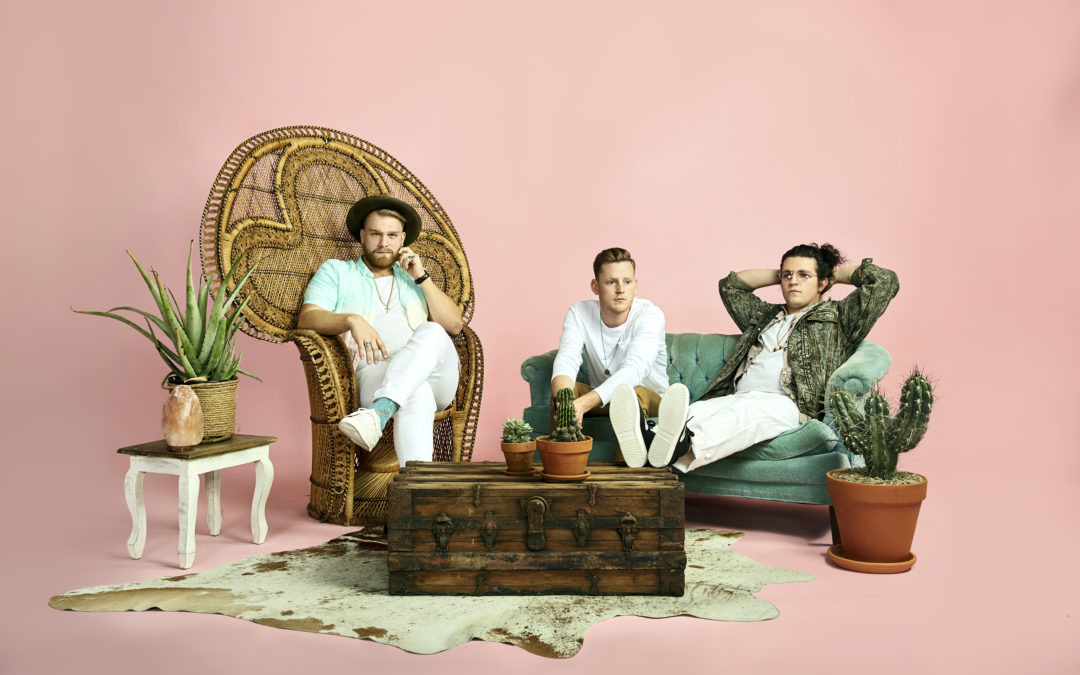 And then there were three…

Back in 2011, local alternative rock radio station 96X began airing “Switzerland,” an infectiously melodic song full of emotion blending what seemed to be a marriage of Appalachian mountain music, classical and pop.

Listeners in Hampton Roads were surprised to learn the band — originally called Bison before changing it to The Last Bison — hailed from Chesapeake.

At the time, The Last Bison was comprised of seven members — family and friends. They released the full-length album”Quill” to rave reviews.

Major record label Universal Republic signed the group and released “Inheritance,” remixed material from their debut with a few new tunes, in 2013 and quickly followed it that same year with “Sleigh Ride.”

During this period The Last Bison evolved both musically and in membership. By the time songs were being written for “Suda,” Ben Hardesty (vocals/percussion/lead guitar), Andrew Benfante (keyboards/guitar), and Amos Housworth (cello/bass) remained committed.

While “Switzerland” remains a timeless gem, the more indie-pop-rock vibe on “Suda” suits the band well. The quality songwriting, instrumentation, and Ben Hardesty’s voice continue to shine but in a new light.

With a European tour in the works, I reached out to Ben to learn more about their journey.

Hardesty currently lives in the “boonies” as he calls it on the outskirts of Charlottesville. He drove several miles towards town so he could get cell phone reception for the following interview.

VEER: The Last Bison has gone from seven members to three. How did the band’s evolution result in you, Andrew and Amos being the ones to continue. Did the others depart on good terms?

Ben: It was a long process. People left the band over the course of a few years — amicably for different reasons. For instance, Teresa (Totheroh) moved to the West Coast with the military. My dad got tired and had responsibilities in Virginia. Annah and Amos had a kid so Annah bowed out because she didn’t want to be touring anymore.

It just ended up being Andrew, Amos and I. We just love being in a band and making music so we were, like, let’s just evolve.

VEER: You currently live on the outskirts of Charlottesville while Amos and Andrew work in Nashville. Outside of family members, do you still call Hampton Roads home?

Ben: Absolutely. Amos moved back to Virginia Beach last week. He and Annah are probably looking at a house there. We might even take a permit out and build a little Last Bison studio in the backyard so we can do more stuff in-house.

I’ll be moving to Washington, DC in September. My wife’s got a job there. I’ll still be pretty close to Amos so we can take care of a lot of the band stuff, management.

VEER: What is the songwriting process for you these days living such a distance from the others?

Ben: I will say a lot of my songs start with me deciding I didn’t understand something that happened in my past and a lot of the times my songs are revisiting experiences from my past and trying to understand them from a hindsight point of view.

I find for me the song ideas don’t necessarily come all the time sitting at the piano or with the guitar. I’ll go on long drives through the countryside and usually ideas will come. I’ll start singing and pull out my voice recorder and record ideas. I go home and flesh them out.

I find some of my favorite songs I’ve written have happened that way. It’s kind of a nice way for me to reflect and just burn some gas; let off some steam and come up with some ideas.

I do think that writers block is a thing. I think artists go through phases where they’re more inspired, but when you find certain things and places or environments that spark your creativity then I think it’s an artist’s responsibility to put yourself in those situations and be inspired as often as possible.

VEER: And you, Ben, feel inspired in the boonies outside of Charlottesville in the mountains?

Ben: Absolutely.  I can drive four minutes and be looking at an overlook of the mountains and where the sun sets. I really love Washington, DC and I’m excited to be moving to a city because I’ve grown-up in the country my whole life, but I’m kind of relishing these last few months and enjoying the beauty. When summer happens everything gets super lush and green, and there’s all these swimming holes up in the mountains.

As the earth has gotten greener come summer and all the rain we’ve had I’ve found my new inspiration for songwriting is elevated with that. I’ve jotted down a lot of ideas just in the last week. I can tell I’m going into a season of songwriting. You’ve caught me write at the moment it’s happening.

Ben: I actually think I am. I think I write a lot more in the springtime and summertime. I definitely write all year log. I do find it is easier this time of year.

VEER: A very non-mountainous, non-outdoorsy, non-folksy sound is heard on your most recent album, “Suda.” Can you give us some insight on the new musical direction, not necessarily lyrically but musically?

Ben: We got to the point where there was three of us and we had to really sit down and think…We didn’t want to strip the sound down. We wanted to keep it lush, big and full.

The three of us sat down with the instruments we had and thought about the music we actually listen it.

I got into a really big folk phase in high school. I started going to a lot of bluegrass shows and cool classical things. That’s how we got strings as part of the band.

Even through that phase I listened to a lot of the things my dad listened to in college like Simple Minds, The Smiths, The Cars, Tears for Fears. I thought the songs are generally the same. A lot of songs you could do many ways depending on the instrumentation used. I bet we could take songs from this record and treat them like our old stuff and they’d sound like our old record.

We decided to take of the music we grew-up listening to and explore different sonic textures and atmospheres to fill-in the missing spaces of the people who left (the band). That was really exciting for us. It was good to evolve and tap in to other music inspirations that we had. It was a journey for us of opening the door to different concepts.

VEER: Is the current indie-rock concept specifically for “Suda” as a project or will you continue to record in this style. Or would you take a sharp turn in a different musical direction?

Ben:  Believe it or not, one of my favorite bands of all time is U2. My dad gave me “War,” “Boy” and “October” records when I was 11 or 12. They’ve shifted their sound so many times while still staying true to the art. I really like a lot of bands that do that.

It’s sometimes hard for listeners because they’re used to a band being a certain way.

For us we’re pretty excited about it. We wanted a change. We wanted to explore different things.

When I look back at our previous records they’re kind of like stepping stones to the next version of us.

Our independent record, “Quill,” became  more lush and sonic when it turned into “Inheritance” with Universal Republic. “VA” got a little more electric and a little different. To me it has been a slow gradual evolution into “Suda,” which for us, wasn’t abrupt because there’s been a couple years working on it. But I understand it was for some people.

So I do think we will continue with this sound, especially with less people; we can’t really do what we used to do.

VEER: I’ll say “Suda” is your most complete, consistent album to date. To me it seems the obvious hit is the song “Gold.” “Cold Night” is really quite good as well. Can you share your thoughts in these two songs?

Ben:  I’m glad you said that because those are the two that we chose, but a lot of times bands are really connected to songs they like and they turn out not to be the ones that hit.

Everyone we sent the record to said the same thing about those two songs, which was kind of our gut feeling too.

“Gold” I actually wrote about a month out from recording the record. I was, like, guys I really need to get this one on the record. It just came out of me. I have been writing on the piano recently because it’s making me think outside the confines of the guitar.

The whole record is not conceptual per se, but a lot of the themes are growing pains, lost innocence and the pluses and minuses of growing up and learning things about the world you may not have wanted to but need to cope with those and lean on people.

I grew-up on a summer camp in Chesapeake, Virginia, and my parents were building a camp in the jungles of Bolivia. The song is about having to rely on your parents for your wellbeing and you have to trust them in the process. The song is about being uprooted in Virginia and going to South America.

The house they built was near a river. In the not rainy season you could float down it and there were all these gold deposits on the river that Bolivians used to mine.  We explored these old abandoned mines, but I was told you could pan for gold as well. As a kid I would get down in the river with a pan and act like a 49er and try to pan for gold, which was really exciting as a kid.

Looking back on it life is about doing your best to enjoy the journey and not only focusing on the end goal but being present whether you hit gold or not. That’s what that song’s about.

I have my thoughts on every song written-out somewhere, just because I always forget.

VEER: How did the Universal Republic experience impact you?

Ben: I will tell you having someone else do a lot of the work is definitely easier, which is the benefit of being on a major label. You don’t realize how much stuff they’re doing until they’re not doing it anymore.

I’ll straight-up say it: We didn’t sell major record label numbers so they couldn’t keep us, which I totally understand. We had a lot of good connections that we’re still friends with. The experience for us was positive looking back, though when I got the call they weren’t going to continue with us it was a little heart-wrenching. I always try to look at change as a catalyst for new opportunities and growth.

VEER: “Switzerland” is the song that that gained notoriety for the band thanks to WROX-96X playing it in heavy rotation. It’s one of those rare songs that stops you in your tracks and makes the listener focus. Such songs have been career makers for bands. I wonder, though, do you ever tire of performing it?

Ben: There was a phase in the past couple of years where I wanted to distance myself from it, but I’ve come full circle.

I love playing it when people are singing along with it. I never get tired of it.