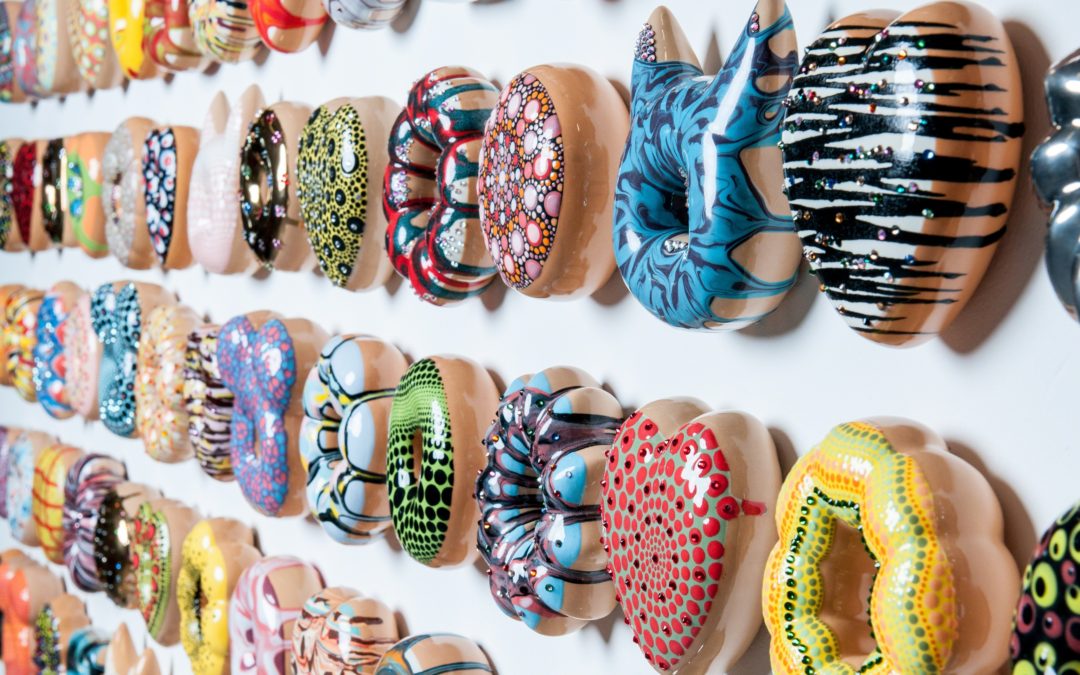 It all started—and ended—with a donut.

In the spring, my good friend and Hermitage Museum board member, Trish Pfeifer, excitedly shared with me the roster of artists for their summer show, which includes Jae Yong Kim of South Korea.  I was so taken with his “glazed” ceramic donuts that I created a journal entry prompt for my Advanced and AP students based on his work.

On July 1, when I went to review the show, as I stood before a wall of these magnificent life-size donuts, an idea suddenly occurred to me.  I texted director Jen Duncan, who had previously greeted me, and asked if they are available for purchase.  Indeed they are.  She appeared next to me with a diagram identifying the nine that had already been sold.  And I quickly made that 10.  Actually, I spent a long time deciding on which one, ultimately, putting a down payment on a heart-shaped confection for my partner, Bob.  Shh…it’s a surprise.

Donuts may sound frivolous and reminiscent of middle school clay projects in which students across America create their favorite foods.  But these aren’t that.  Or, if they are, they are a dramatically amplified version.  Exhibited, at times, with ceramic snails as these are—a symbol for carrying one’s home wherever one goes—the rows of exquisite, glistening donuts represent, in part, the purity of childhood joy and delight.  Kim’s pursuit of home is somewhat parallel to that of Do Ho Suh’s, another South Korean artist, though Kim divides him time between Seoul and NYC and Suh relocated to the US from Seoul.

Kim’s now iconic hand-made donuts—gloriously decadent in their varied forms, colorful glazes, patterns, occasional glitter, and even Swarovski crystals—speak to the somewhat less pure ideas of mass production, consumption, and perhaps even conspicuous consumption.  But it is virtually impossible not to get swept up in the sheer joy and delight of such a feast for the eyes.  It would be fair to question, however, whether the snails and donuts are comfortable, or even provocatively uncomfortable, bedfellows.  One does not seem to need the other within the same installation.

Equally as bright in palette and as steeped in popular culture, though in a completely different way, is the baked enamel on steel plate work of Hung Yi.  His dragon and dog sculptures in the exhibition, auspicious creatures in their own right, boast brilliantly colored surfaces—inspired by both comics and Taiwanese folk art—on which contemporary symbols of both East and West explode and collide.   Folk culture and religion shake hands with personal experience and observations.

When asked, “Why Asian art?,” Duncan shared that the initial inspiration was in response to the question, “What would Mrs. Sloane be collecting today?”  The Hermitage Museum is located in the late Florence K. Sloane’s Arts and Crafts mansion and is filled with the Sloane Collection, including her considerable collection of Asian art and artifacts.  A related question thoughtfully considered by the staff was whether the artists chosen—who hail from China, Japan, South Korea, and Taiwan–need to be qualified as “Asian” artists or simply “Contemporary” artists.  Ultimately, the museum chose to use both for the simple reason that the work made by these artists is deeply tied to their heritages: the customs, traditions, religions, and historical-political narratives.

The artists, 10 in all—emerging, but mostly internationally-known contemporary powerhouses—draw upon Zen Buddhism, folk art, pop art and music, and the Chinese Cultural Revolution to explore a range of topics.  Included are their own histories and personal struggles, the concept of the individual against a backdrop of societal norms, philosophies, spirituality, and death.

Profoundly impacted by fragments of Buddhist sculptures on a trip to Tibet a decade ago, Zhang Huan found these body parts imbued with echoes of both religion and history, as the figures had been destroyed during the Cultural Revolution.  In Small Three-Legged Buddha, a copper cast in which one of the disembodied legs stands, in a gesture of dominance, on a partially submerged head—a self-portrait—he writes that he is trying to “experience the state of passing from ‘big self’ to ‘small self’ and finally to ‘no self’.”  In reference to the intentionally obscured mouth, the artist continues, “somehow if you stop breathing, you transcend life and death.  You’re in an eternal state.”

Like their contemporaries, these artists use materials metaphorically and value process equally as much as product, if not more so.  Huan prefers to let the traces of welds between pieces of copper show, for he feels that they are akin to pieces of skin stitched together after an operation.  He also creates paintings from incense ash burned in Buddhist temples, a metaphor for the collective soul.

For Kōhei Nawa, the clear glass beads—from small spheres to large bubble forms—with which he covers the surface of taxidermied animals read as both pixels and cellular structures, hence his term “PixCell.” Key to his meaning is the way in which they make it possible to see multiple details at once while establishing a sense of distance through distortion.

Ran Hwang, who worked in the fashion industry in NYC, connects East and West through intricate large-scale images created by pounding into Plexigas thousands of hanji, Mulberry paper button-like pins, some 25 times each.  In their wide availability and use, they symbolize to the artist the common, ordinary person while her laborious process is a meditative ritual related to her practice of Zen Buddhism.

Zhang Xiaogang’s nonobjective, minimalist paintings—which he considers more conceptual than abstract—connect both through material and his slow, layered process to a burial tradition in his village.  There, when the elderly begin to feel ill, they annually apply a layer of paint to the lids of their coffins, one layer for every year they live beyond their expectations.  This can result in as many as twenty layers.  His works are radiant, physical aggregates for time, longevity, and death.