Shakespeare’s Greatest Show on Earth in a Chesapeake Grove 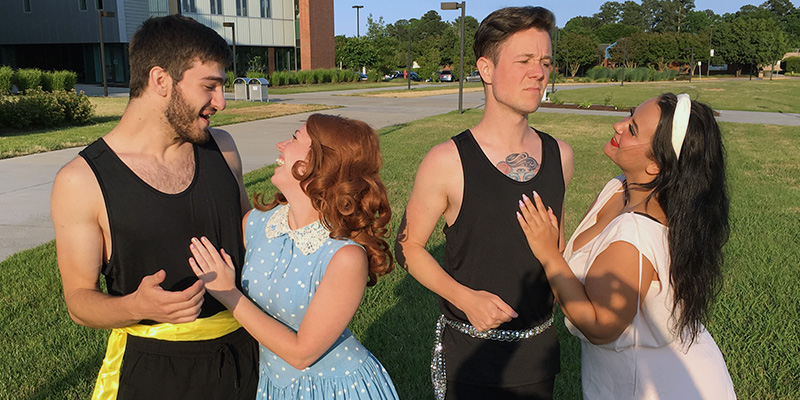 Shakespeare’s most popular comedy,  A Midsummer Night’s Dream, has that claim to preeminence reinforced locally this week. .

Midsummer has some claim to being Shakespeare’s best liked play of any genre, be it tragedy, comedy, history, pastoral, pastoral-comical, historical-pastoral, tragicomedy, problem play or what you will.

It’s always great fun to watch two pair of mixed up and mismatched young lovers evading parental authority and a “sharp law” that would compel them to marry according to the arbitrary wish of a clueless dad. On the lam, they fall in and out of love, find themselves caught in the backwash of two older folks’ marital squabble and run into truly rank amateur actors flailing through a first rehearsal. (The would-be thespians of Dream’s play-within-a-play, itself a sort of send up of Romeo and Juliet, never fail to get laughter.)

Plus, an egocentric buffoon gets turned into a jackass.

Then too, Dream has given us one of the Bard’s most quoted aphorisms – “the course of true love never did run smooth” – plus foodies’ favorite and perhaps belabored paraphrase: in the all too accurate generalization, “What fools these mortals be,” it’s routine to substitute the words food and morsels.

Most importantly, Dream is accessible. It’s easy to follow.

Shakepeare’s other comedies are often filled with wordplay that set the groundlings in a roar 400+ years ago, but which depend on word meanings long since lost. Young love, parental disapproval, rampant ego and Dream’s other plot components are timeless.

If a hasty plot, sub-plot and sub-sub plot summary sounds like a figurative three ring circus, that’s especially appropriate to this staging. Director and TCC Adjunct Professor Trey Clarkson, who spoke about the show by phone, has shifted the setting to an early 1900s travelling circus while still being “true to the characters” that Shakespeare wrote, he said.

Magic becomes hypnotism, the novice actors called “rude mechanicals” become the members of the freak show, the Queen of the Fairies is now the beast-taming Queen of the Tigers, and so forth.

Shakespeare purists should not quail at this; remember Patrick Mullins’ brilliant Romeo/Juliet at Virginia Stage Company in 2009, which put the star crossed lovers in the world of selfies and cell phones, or Ricardo Melendez’s equally innovative and successful 90 minute Workshop Theatre 2008 production of Hamlet that even reordered the scenes to fine effect.

Clarkson is especially eager to praise his 25 member cast, “a large group of really talented actors drawn from [various] venues in the area.” The four actors who play the lovers are possessed of “Speed and talent and vivacity.” There’s none of the double casting for convenience to which directors often resort when doing Shakespeare; the local talent pool, Clarkson notes, is “big enough to give each character his weight.”

He mentions especially the actors drawn from Norfolk’s Push Comedy Theater, whose hallmark youth-oriented irreverence simply could not be more well suited to the spirit of Shakespeare’s original intent.

Romantic hijinks in the open air on summer evenings – lawn chairs recommended – should make for a circus that might delight even the former small town country boy who grew up to be Shakespeare.

Shakespeare in the Grove