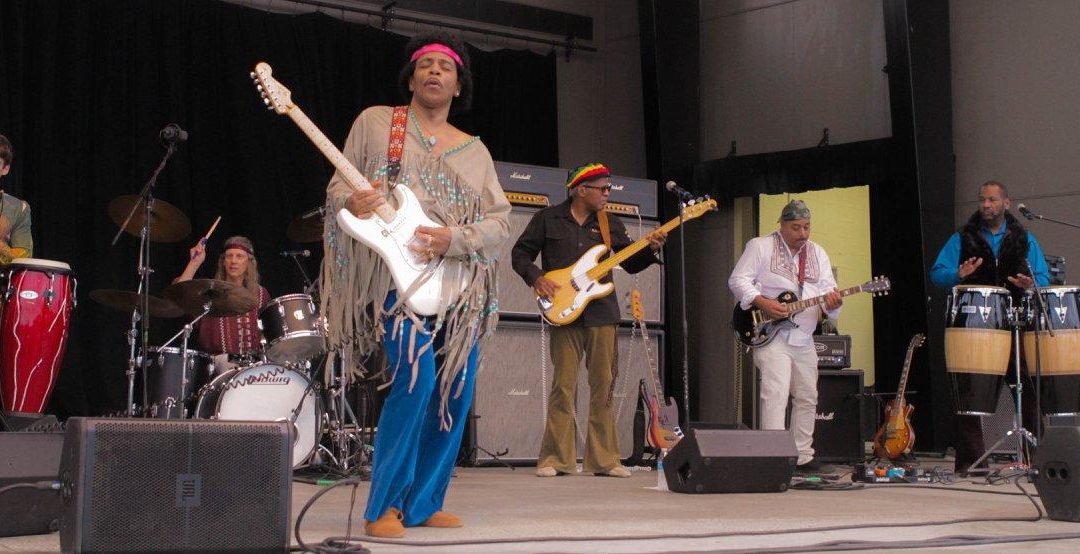 Kiss The Sky, an authentic musical tribute to the late Jimi Hendrix, will be the highlight of the Sandstock: A Tribute to Woodstock festival when they perform Sunday, June 30 at 24th Street on the Virginia Beach Oceanfront.

This year’s Sandstock pays homage to the 50th anniversary of Woodstock and includes tribute performances featuring the music of The Who and Santana as well as classic rock artists Boston, Foreigner and Bon Jovi (see complete schedule below). ADMISSION IS FREE.

In advance of Sandstock, a caught up with Jimi Hendrix tribute performer Jimy Bleu, who actually attended Woodstock, to learn more about his role and experience.

How did you prepare for your role as Jimi Hendrix? Did you watch concert footage of Hendrix’s Woodstock performance?

I was in Jimi’s fan club. I was around Hendrix at that time. I’ve been doing this for 50 years.

I was at Woodstock. I saw what he did and have had decades to study the footage not only of Woodstock but his other concerts.

What was the Woodstock experience like for you as a young man?

A lot of people really dug Woodstock. I love the vibe of that era, but I hated being at Woodstock because I was a momma’s boy from Queens. Woodstock was dirty, muddy. I was cold, hungry. I wanted to go home. I kept cryin’ to the older guys that I wanted to go home. They kept slappin’ me on the top of the head. It was horrible for me. That what I thought of Woodstock to tell you the truth.

I did see some iconic acts like Sly (and the Family Stone), Santana, Johnny Winter. I guess it was worth it in that respect.

We’ve seen footage of cars being parked along the roads for miles away — abandoned — as concert-goers walked to the Woodstock grounds. How did you and your friend get to the festival?

We arrived in a van and had to leave it on the highway and walk miles and miles. It took us about a day to work our way up to the stage by the time Jimi was on.

It was a good thing they kept pushing Hendrix back — his performance time back to Monday — because otherwise we would have missed it.

We got there a couple hours before Sly (Stone) performed. That was crazy because I didn’t know until I got back home that Sly performed a song called “Higher” and he had the whole crowd yelling “Higher,” and at that time is was the peak of the number of people in attendance at Woodstock. It was like a whole city yelling “Higher.”

How was Sly’s performance at Woodstock? Was that the peak of his career?

When you were standing it that sea of humanity, what did you thing of Jimi Hendrix’s performance? Was he the main performer you want to see?

I joined Jimi’s fan club right after the “Electric Ladyland” album. It was November of 1968.

Even at that time, Jimi was not my favorite guitar player. I was trying to be an English white guy; that’s what I wanted to imitate. And Jimi was black, so I didn’t consider him rock. I’m just telling you where my head was at that time.

At Woodstock, I was expecting to see the Hendrix that I was seeing at the Fillmore.  The band was totally different. The music was more loose. I wasn’t impressed, let’s say.

When you heard him perform the “Star Spangled Banner” at Woodstock, did that take you by surprise and did you see it as an iconic performance in the moment?

Yes, I thought it was iconic because it was the best I’d heard him play it. He’d performed that song many times before and after, but at Woodstock there was a little something different, and what better way to tell an operatic type story of the war (Vietnam) and what that era was like. That’s why that song is iconic.

I wasn’t thinking too much politically at that age. I actually was on the road in the early ‘70s and got drafted. When I called my mother to check-in, she said, “Oh, you got a letter from the draft board.”

Basically, I rode it out long it enough that Nixon nixed the draft. That how I got out of it.

What impact did the tragic death of Jimi Hendrix have on you?

It seemed a lot of people were dying at the same age. I was kinda scared of reaching 27. Once I reached 28, there was a big sigh of relief.

When you perform, do you try to replicate his 1960s era wardrobe as well, including the headband?

Yes, we replicate all of the periods.

Just as a side note: Jimi wore the headband because he was losing his hair. Somebody suggested a scarf and it seemed to work. It’s a very iconic Jimi Hendrix look.

What do you want to show audience when you perform as Jimi Hendrix?

We’re showing the way Jimi reinvented the way the electric guitar is approached. It put a guitar in a whole new way of incorporating sounds, body movement, with a unique vocal style.

We show the iconic moments of Jimi’s career — from beginning to end. Jimi himself never had a chance to put that all into one show. That’s what you’re seeing when you come to see us.

5:30 pm Festival Gate Opens to Hippy Dippy Stage on the beach at 24th Street, food and ABC sales begin. Sponsor and vendor displays open on Boardwalk. Free and everyone is welcome.

5:30 pm Festival Gate Opens to Hippy Dippy Stage on the beach at 24th Street, food and ABC sales begin. Free and everyone is welcome.

6:30 pm Bargain (The Who) performs on Hippy Dippy Stage on the beach

9:00 pm Don’t Look Back (Boston) performs on Hippy Dippy Stage on the beach

5:30 pm Festival Gate Opens to Hippy Dippy Stage on the beach at 24th Street, food and ABC sales begin. Sponsor and vendor displays open on Boardwalk. Free and everyone is welcome.