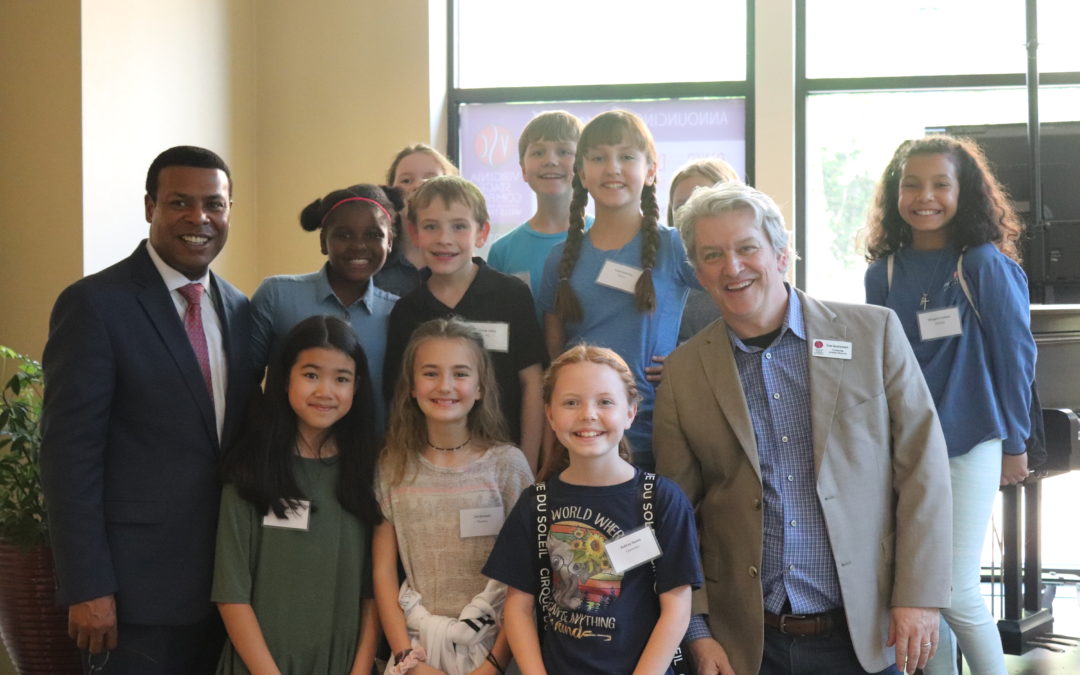 Reaching the final production in the landmark 40th season of Virginia Stage Company feels akin to completing a particularly taxing marathon. And if that’s how I’m feeling about it, as just someone who writes extensively about this company—including the preview of season opener, Always…Patsy Cline back in September—I can only imagine how VSC’s creative team and supporting staff feel.

“We’re all pretty tired,” says Tom Quaintance, VSC’s Producing Artistic Director, who is helming Matilda the Musical, the Tony award-winning, big time family friendly musical that closes out Virginia Stage’s historic season. It’s late within the first week of rehearsals for the show, and just so happens to be the day after Tom’s birthday, when he joins me in the lobby of the Wells Theatre, along with local actor Ryan Clemens, who portrays Mr. Wormwood, to talk about Matilda and this noteworthy season.

In order to properly celebrate the milestone of reaching a 40th season, there was a whole lot of additional programming that complimented what was already designed as a lengthy season—one that began in the early fall of 2018 and runs into summer 2019. Tom previously described season 40 as “the biggest tent we’ve ever built at Virginia Stage,” and their increased public outreach has not been simply PR spin, but rather a clearly measurable goal which they appear to have been successful at meeting.

It’s also been great as a patron to get to experience the artistry of former VSC Artistic Director, Chris Hanna, who did a remarkable job in directing the American classic, Our Town, while also discovering the work of an Atlanta based, much newer director in Tinashe Kajese-Bolden, who really put her “own stamp” on Native Gardens―all in the same season. It almost feels like two seasons packed into one, yet somehow it all worked. “We knew that it was a big, ambitious season,” says Tom.

“Having Fun Home and Bluest Eye coming into the new year…starting the new year out with two fantastic but difficult pieces, that are challenging in a lot of different ways—and people responded to them—but we’re also a little bit like ‘okay, here we go’(sigh of relief), and then having the fantastic comedy coming out of that in Native Gardens, and then ending the year in the big lift that is Matilda, I think worked exactly the way we wanted to,” Tom says, later in the conversation.

Matilda the Musical is a really big show. It features a cast of over 40 people, which includes professional New York City actors, and a whole bunch of kids who range significantly in age, including many students from our local gem, The Governor’s School for the Arts. It’s a whole lot for any play director to navigate, but certainly Tom’s 13 years teaching high school theatre, his years directing big shows for other companies, and his time spent working with the late Garland Wright at The Guthrie, an experience that he describes as “working with someone who was a master at working at scale…who would paint with bodies on stage,” has prepared him for the challenges.

It also helps that Tom loves working with kids, and has a particular love for high school theatre. “I consider the well-made high school musical the pinnacle of the art form,” he says, without a hint of sarcasm. “There’s something about working with students, where you can get to a purity of how much they love performing, that is harder to get to with adults,” he explains. Tom caught Matilda on Broadway, and notes that he loved it “as a piece of theatre, not as a piece of family theatre.”

“My feeling walking out was that every kid in America, who wants to be in musical theatre, should see this play,” he says, because of how well the show is written and choreographed. “I love Annie, by the way, but there’s been a million terrible, terrible productions of Annie out there,” he rightfully notes.

The two-act musical is of course, based on the Roald Dahl novel of the same name, which was published as a children’s novel back in 1988, to great acclaim and has sold millions of copies since. The story’s protagonist is Matilda Wormwood, a five year old who is growing up in England, and is the daughter of eccentric parents who treat her with cruelty. Matilda also deals with the tyranny of Miss Trunchbull, the headmistress at her school, though she does find support from her teacher, Miss Honey, who is impressed by the girl’s high intellect and tenaciousness. Matilda, with her power of telekinesis, and deep love for literature, eventually leads her fellow students to overcome the oppressive rule of the headmistress.

Matilda the Musical opened on Broadway in April 2013, and ran for nearly 4 years. With its book by Dennis Kelly, and its music and lyrics by Tim Minchin, the show received critical acclaim and won multiple Tony awards. Mesgana Jackson portrays the coveted title role in VSC’s production of Matilda. Casting the parts entailed multiple local auditions, as well as the standard auditions in New York City. Ryan Clemens, who works as the company’s lead theatre artist, won the role of Mr. Wormwood, Matilda’s problematic dad.

“Mr. Wormwood is a used car salesman and has a flashy green suit, and knows that the secret to success in business is hair,” Ryan says, with a slight chuckle. “So this is a character that you recognize at a distance.” He and his ballroom dancing wife, Mrs. Wormwood, who is portrayed here by Robyne Parrish, ridicule their daughter constantly, calling her disparaging names and even addressing her as a boy.

“She’s this extraordinary, little genius kid who creates her own way, despite…not because of her parents,” Tom later adds.

“We all wish we had a Matilda in our lives.”