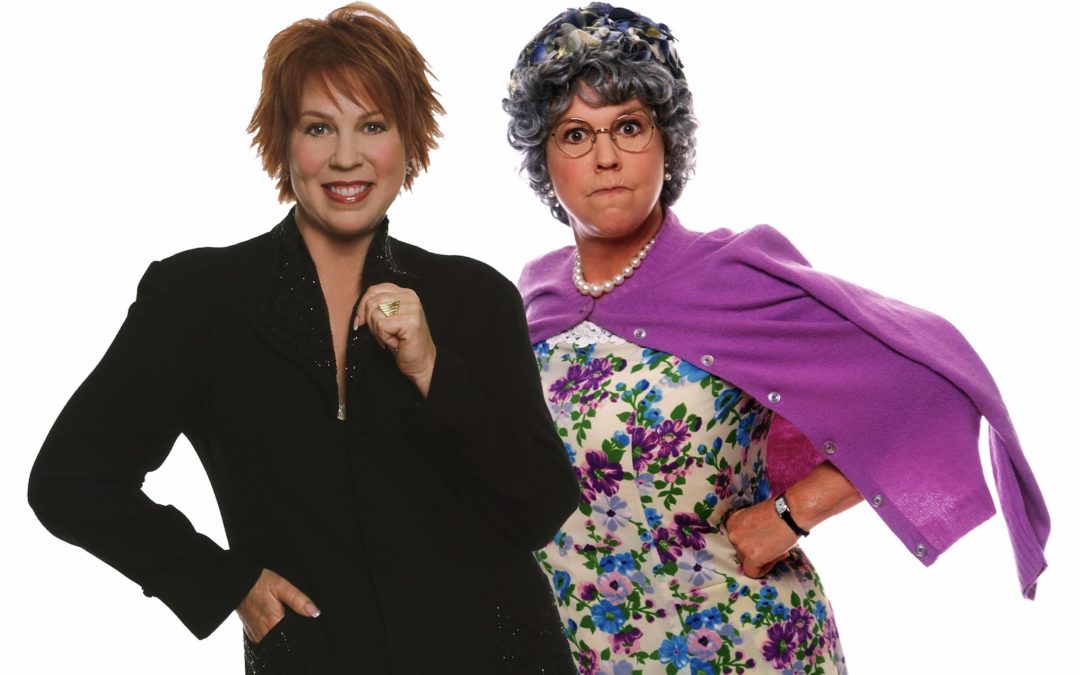 Comedian/actress/recording artist Vicki Lawrence, best known for her role as Mama on CBS’s “The Carol Burnette Show” (1967-78), will bring her “two-woman” act to Ferguson Center on June 9. (NOTE:The Vicki Lawrence and Mama: A Two-Woman Show performance scheduled for Thursday, May 23 at the Ferguson Center has been moved to Sunday, June 9 at 7 p.m. so that Ms. Lawrence can attend Tim Conway’s memorial service. Patrons not able to attend on June 9 will receive a refund, and should call the ticket office at (757) 594-8752. Tickets with the May 23 date will be honored on June 9.

Lawrence’s two-set performance will open with a storytelling segment spanning her career, and then following a brief intermission, will reappear in the character role she made famous.

Following is an excerpt from my phone conversation with Vicki Lawrence regarding her new TV sitcom “The Cool Kids” and more.

Regarding your role as Margaret on “The Cool Kids,” what intrigued you about co-starring in a new sitcom at this stage in your career?

It was a fun part. It’s kind of back to multi-camera in front of a live audience, which has been gone for some time. My co-stars were all adorable people that I did not know but was anxious to work with. I was also excited to work with Charlie Day because I was a fan of “Always Sunny in Philadelphia.”

A lot of traditional TV show viewers are Baby Boomers and can relate to the retirement living theme. Does it help viewers seeing familiar faces they grew up watching in updated roles?

I hope so. We’re all either there or gettin’ there.  We have a great younger audience too because they probably have grandparents they like to laugh at.

I play a lot of these places around the country. We’re like the largest portion of the population now — all of us Boomers. Those people are very active. They’re having fun with their disposable income and a lot of them are single and just having a great time later in life.

So it’s fun just to be embracing that and portraying it.

One of the first questions we got in our first news conference was, “Are you to address the fact that older people are having sex?” And we were, like, okay, yeah, we’ll try to address that.

Once you shoot a segment for a television show, do you ever watch the program? Do you analyze your performance?

Not myself so much, but maybe I over-analyze the show a little bit; like I wish we’d done this different or I wish the editing had been different. I try not to critique myself too much.

When I was a kid my parents gave me an album recorded by you which included the song “The Night the Lights Went Out in Georgia.”  Did you see recording music as a potential duel career?

I really didn’t think about it. I happened to be married to the guy that wrote that song for about 10 minutes, and it was the only good thing that came out of that marriage, which I think was doomed from the very get-go.

He wrote that song and hated it. I kept saying it was a hit. He could not give it away. Nobody would do it. Everyone said it was going to offend the South.

Finally his producer said, “Screw it, let’s just go into the studio and do it with Vicki.”

I was right. It was a hit a big hit I would say largely because I lobbied long and hard for the guy who arranged it — Artie Butler. He was very much responsible for the dark and eerie sound.

I did not want to continue recording because it had been a bad experience and did not end well. I was ready just to go back to the Carol Burnette Show and just be funny.

How did you create the character role Mama?

It was written by two of our writers as a one-time sketch. They both had dysfunctional upbringings and wrote this beautiful homage to their messed-up families; lovingly creating the role of Mama for Carol. When she read the final draft of the sketch she said, “I’m just not feeling Mama. I feel Eunice,” which was very upsetting to them because they had poured their heart and soul into this beautiful sketch.

Carol then went to Bob Mackey and said, “Don’t you think we can make Vicki Mama?”

By that time I had played a lot of old ladies on the show. I was the second female lead, so when Carol was Cinderella I was the Wicked Witch. When Carol was Shirley Temple I was the mean ol’ school mom. That’s kind of the way the show went.

So Bob said, “Yes, we can make Vicki Mama,” which was doubly upsetting to the writers.

When we got into rehearsals Carol said, “Listen guys, I think we need to do this Southern.”

The writers were so upset the first time they saw us do it they got up and walked out and said, “You’ve ruined our beautiful piece.”

Carol said, “Well, that’s the way I think we should do it.”

It went on the air and got great feedback from the fans. So those writers ended up having to write those characters over and over again. They couldn’t write them fast enough.

What did you learn from working with Carol Burnette?

Now more than then I appreciate where I had the good fortune and privilege to grow up and learn.

Carol’s show was not the norm in show business. We did it like a live show. We had a blast every week. It was a well-oiled machine with all the best people in all the right positions. Everybody was hands-off and let everybody do their thing. It ran like a tight ship. It was a very nurturing environment.

I feel like I went to the Harvard School of Comedy in front of America with the best teachers in the world.

The most important thing I learned from her was probably the business of show business should run. It should be fun. If you’re not having fun then go sell used cars in Iowa.

As a young comedic actress, was it challenging being part of a live variety show with so many characters to play, or were you having so much fun you didn’t really give it much thought?

I spent a good portion of that 11 years just learning. I really felt like I was in school. They would give me little things to do, and if I handled that they’d give me more to do.

What happened to me would not happen nowadays. Now, if you’re not Carrie Underwood out of the box you’re voted off.

How do you keep the material fresh and current for your “Two-Woman” live performances today?

My half of the show is largely autobiographical. I know that people love to hear all the old backstories of how showbiz was back in the day.

The Mama half I just try to keep topical. She’s my chance to come out and talk about everything going on in the world that’s driving us all nuts, but from this crazy old lady’s perspective.