Sumptuous Music for Play of Passion 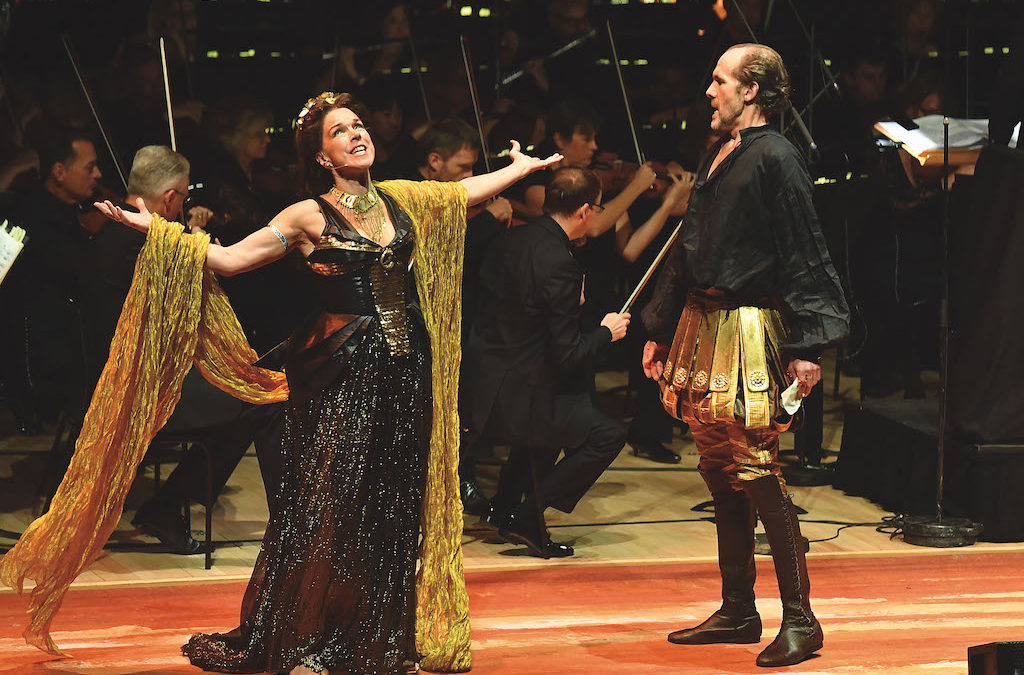 Shakespeare’s other pair of doomed lovers – Antony and Cleopatra, the grown up ones – play out their ill fated romance alongside the Virginia Symphony in Norfolk and Newport News mid-May under the baton of VSO’s much honored, triple Grammy winning Classical Woman of the Year, JoAnn Falletta.

Shakespeare’s play is set when three politicians and generals of post-Julian Rome; Octavius, Antony and Lepidus; were vying for power.

This new staging, by Concert Shakespeare Works under the direction of CSW founder Bill Barclay, harkens back to an almost forgotten performance of 99 years ago at the Paris Opera,  helmed by André Gide with music, since lost, by Florent Schmitt.

Gide went on to win a Nobel Prize for Literature 27 years later. The once admired and celebrated Schmitt and his Antoine et Cléopâtre Suites, Opus 69, all that remains of the score from which Schmitt extracted it, sank toward obscurity. (Barclay’s program notes for the Los Angeles production call Schmitt “the best French composer you’ve never heard of.”)

The hugely prolific Barclay, who is Director of Music at Shakespeare’s Globe and a composer in his own right, as well as an author, director, arranger and actor, wrote by email that “The adaptation was spurred on by the Shakespeare anniversary in 2016 [400 years after Shakespeare died], and Sakari Oramo’s desire to conduct this music. Paul Hughes, the CEO of the BBC Symphony Orchestra, broached a collaboration with the Globe. I had never heard the music and when I did I was hooked.”

By coincidence, Falletta and the Buffalo Symphony had just recorded Schmitt’s suites.

An almost complete lack of records of the 1920 show, and the disappearance of its full score, compelled Barclay to start from scratch, working with only the script and the Orchestral Suites.

“I set to pull apart the suites and recreate the drama…we have …an extremely taut retelling. Meanwhile we get to introduce to music lovers a score that is unnecessarily neglected – sumptuous, beautiful and evocative.”

When Barclay encountered the Falletta/Buffalo recording, their Virginia bound collaboration was formed. (Their professional partnership – “kind of serendipitous,” Falletta termed it – worked out more successfully than did the pairing of the Roman general who made his mark with Julius Caesar’s funeral oration and the Greco-Egyptian queen who had been Caesar’s paramour.)

The central element of the drama is often thought to be a clash of cultures: the faded majesty of sun-drenched Egypt is set against all-conquering, nearly-imperial Rome. To be Roman is to be hard edged, pragmatic and acquisitive, to be Egyptian is to be sensuous, romantic and hedonistic.

Barclay speaks of “the pull that everyone feels between those competing impulses…pulling us down to earth (Egypt) and up to the heavens (Rome). Then when Cleopatra refers to Antony’s voice as ‘all the tuned sphere’ – she’s telling us we had it all wrong – Egypt, the land of lust, is actually the land of the gods – of following our passions. And Octavius and the Rome he represents is repressive order.”

“What dooms Antony & Cleopatra’s love is the fact that politicians are simply not allowed to do what they like, and this lesson still serves us today. We pillory and punish public figures for following their hearts, because we love to devour people.”

She speaks of as “sense of drama and color and emotion in the music,” agreeing that there is a sense of foreboding evident from the opening moments of the Suites. “You know it’s doomed from the start,” she says, but “the wonderful thing for me is that the music elevates them.”

“What I like about the music is it’s nobility and dignity. Somehow in the end with this music all that becomes noble.” Antony and Cleopatra are “driven by a kind of pure love; something bigger than themselves.”

Barclay “gets the essence of the play and integrates it” with Schmitt’s music, Falletta says. The music “is not simple. It does not have any simple emotions,” but instead, like the love of the title characters, has “all kinds of undercurrents…The music does not become secondary. It’s a very important and powerful character.”

“It’s not about putting the band in the pit and staging a play again,” promises Barclay.

Acting and music overlap each other. It’s not acting then music then acting…They exist in an integrated …organic…way,” Falletta says.

Barclay concurs, “This Antony & Cleopatra tries to make the music incidental again while, critically, keeping the orchestra as the protagonist of the evening… It’s about finding a new artful way to remarry story with symphony.”

Antony and Cleopatra by William Shakespeare