Shaking Will’s Shows Down to Basics 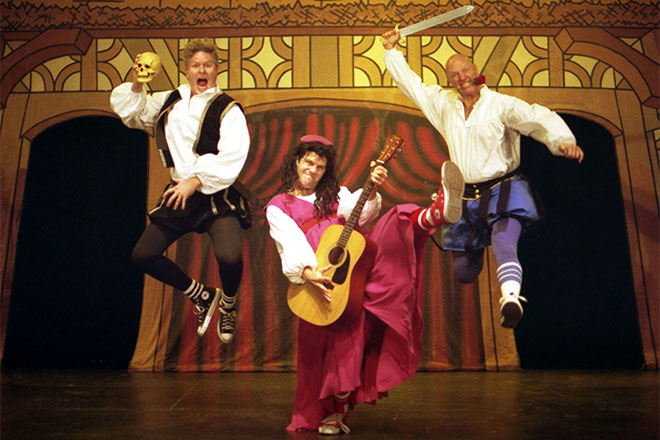 The Reduced Shakespeare Company returns to the Arts Festival to put yet another unique, hilarious, high pressure squeeze on the greatest playwright of the Western World.

Reducing to 97 minutes a body of work that totals 867,711 words (Riverside Edition, your count may vary), and which took one group of college students, reading non-stop, 105 hours to present in its entirety, is one very severe compression.

That’s what RSC’s latest production, The Complete Works of William Shakespeare (abridged) [revised] has boiled the Bard down to: a three actor, hour-and-a-half madcap romp through (possibly all) 37 of the plays by the master of all wordsmiths. Variations of this show have been delighting audiences of the Shakespeare-phobic and of Shakes-savvy Bardolators equally, since it won Best of the Fringe in Edinburgh for 1987, their premiere performance.

It’s sort of a 3 for 1 show. After doing all the plays in 90+ minutes, the company does a Mach 3 version of Hamlet, forwards and then backwards. Their record for doing their condensation of the longest of Shakespeare’s plays beginning to end stands at 43 seconds; end to beginning their fleetest is one second less.

Cast member Michael Faulkner, now in his 18th year with the troupe, summarized the RSC approach to the revered Swan of Avon thusly: “We cut out all the minor characters and get right to the sex and the killing, what people want to see.”

He describes their land speed record Hamlets as “Hamlet every which way and loose, Hamlet frontwards, backwards and over the top!”

The show has “toured seventeen countries, all 50 states and New Jersey,” he notes, and visited “innumerable states of mind.”

Faulkner (no relation to the Southern American Nobel Laureate) has plenty of serious, or perhaps one should say, more conventional acting to his credit.

Since making his theatrical debut at the age of 14, he’s played “ a lot of the fools,” in Shakespeare and several leading roles.

“I had done a lot of actual Shakespeare, and then I joined the RSC.”

(For years the Reduced Shakespeare Company – also known as “the bad boys of abridgement” —  has been disclaiming any connection to “that other RSC,” the group whose name begins with the word “Royal.”)

In television commercials Faulkner has been seen “Air drumming in a VW, stripping off my clothes for Rent-A Center, and giving friends fried chicken as Christmas gifts.”

He was also “tasered on the Jay Leno show,” in an American Idol spoof. His audition was purportedly so bad that Simon Cowell used that high tech version of vaudeville’s old hook to get him off stage.

Come to The Complete Works of William Shakespeare (abridged) [revised]  with “no preconceptions,” with “an open mind and a full belly,” he advises, though he does note that RSC “cannot be responsible for [the effect of the show on] expectant mothers.”