PREVIEW: Collaboration is Everything for I’m With Her 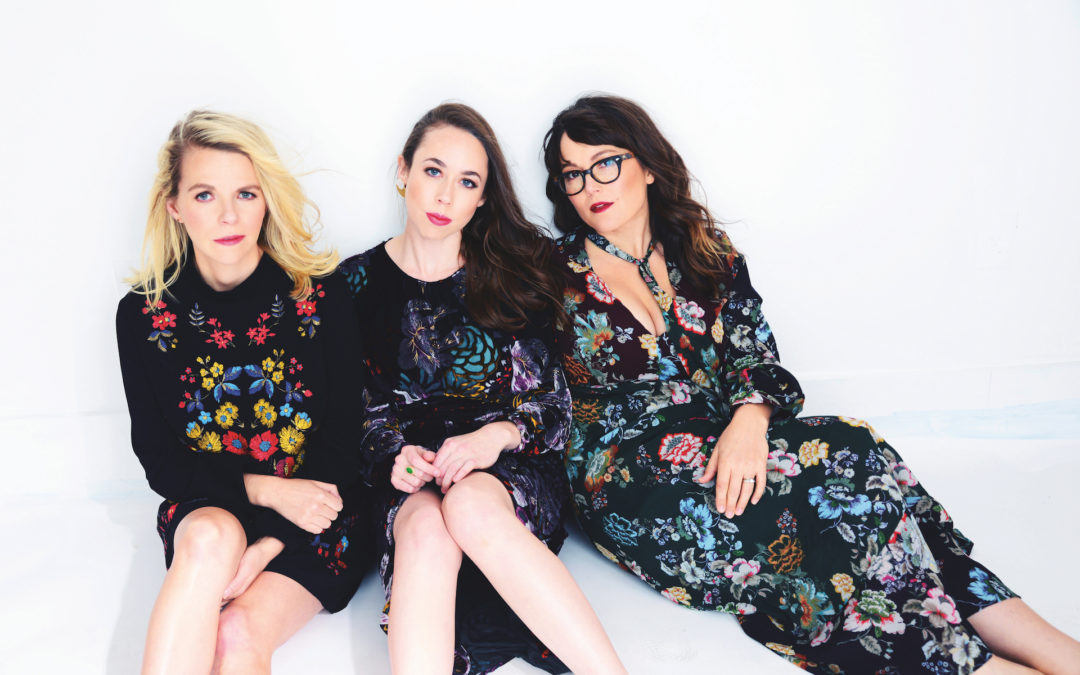 The members of I’m With Her sing and write together as naturally as if they’ve been friends for decades. While they’ve known each other for a long time, it wasn’t until a moment of serendipity five years ago that they combined their ambitious writing skills and their supple singing voices to become an acoustic supergroup that defies labels.

The three were at the Telluride Bluegrass Festival in 2014 invited to give a workshop. Aoife O’Donovan was touring behind her solo debut. Sara Watkins was playing as well. Sarah Jarosz was the serendipitous wild card who happened to stop by. “Jarosz was there to just hang out, which is crazy for somebody who is as busy and in demand,” O’Donovan says in a phone call from home during a tour break in April.

On the last day of the festival, they were asked to deliver an impromptu late-night set so they ditched the pre-show drinks for a bit of practice. The first songs they tackled were O’Donovan’s “Magpie,” not an easy tune by any account, and “The Darkest Hour Is Just Before Dawn,” the bluegrass gospel classic.

“We never do “Magpie” in the show,” O’Donovan says. “We don’t do a ton of stuff from our solo records. It was just so beautiful with the three of us. It felt magical. “Darkest Hour Before Dawn,” of course, is a great Emmylou Harris take on a classic. That was magical.”

They worked up six or seven songs in all, played the set, and immediately realized this wasn’t a one-off festival collaboration. “It felt like such a moment, such a thing that we followed up with each other in the days following saying should we do this? Should we do this? And we did.”

“I’m With Her” was born (before Hillary used it as a campaign slogan). Now, they’re more than a year into touring behind their delayed debut (more on that later), “See You Around.”

They arrive at The Sandler Center for the Performing Arts as part of the Virginia Arts Festival on May 23. It’s their first night back after a month’s break. It’s also Sarah Jarosz’s birthday.

For all of them, it will be a return to the area. O’Donovan played under the big tent at North Shore Point House Concerts in 2014 and 2016. Jarosz played the Sea Level Singer/Songwriter Festival in 2015. Watkins played the Ferguson Center in Newport News in 2012 with Jackson Browne then again in 2016 with Patty Griffin and Anais Mitchell of “Hadestown” fame.

They’d met early in their careers, but weren’t immediately friends. O’Donovan went to the Philadelphia Folk Festival when she was 18 and a freshman at the New England Conservatory to play her first professional gig outside a Boston bar with the Wayfaring Strangers. Watkins was there with Nickel Creek in the days before the group would become superstars and Grammy winners. She met Sara, her brother, Sean, and Chris Thile of Nickel Creek at an after-party then they continued to run into each other at festivals over the years. Jarosz and O’Donovan met at the Rocky Grass Festival in 2006 when the prodigy was 15, but already with years of festival work behind her. “They really grew up with a similar path in the music festival scene,” O’Donovan says of Sarah and Sara. “I came to it in the later teens.”

They pressed ahead with I’m With Her recording a couple of covers, notably John Hiatt’s “Crossing Muddy Waters,” released in March 2015. They played their first official show in Scotland that year. They started writing together at an Airbnb rental in Los Angeles and later at a friend’s farmhouse in Vermont. It came naturally. O’Donovan likes to say writing together works because each of them has the ability to let an idea be everybody’s idea.

“I think what’s really special about working with Sarah and Sara is that with the three of us, there has never been any competition. It has to start somewhere. Somebody has to play the first chord or sing the first line, of course. But the really cool thing is how the songs evolve from the beginning to the finished product that’s collaborative in a way you can’t fake.”

“I know it sounds cutesy or trite, ‘Oh I don’t remember whose idea it was.’ We literally don’t. The songs take so much work in creating them. You tried so much stuff.”

She watched “Bohemian Rhapsody” on the plane back from Europe last month and loved the part where Brian May begins the bass line for “Another One Bites the Dust.” Whether it’s movie fiction or not, O’Donovan sees that as how collaborators work.

“I just love the idea that bands create music,” she adds, “and that’s what the take-away is when you see an I’m With Her show. It doesn’t feel like that was a song with Aoife O’Donovan backed up by Sara Watkins and Sarah Jarosz. That’s not what we’re going for. I think that’s why it’s successful. It feels like a band.”

By January 2016, they were in England recording with Ethan Johns at the knobs. The album they gave birth to during those sessions has been a darling of critics and audiences. For good reason. The harmonies are exquisite. Voices swoop in and out. So is the playing. And the writing is as challenging as it is captivating. “Ain’t That Fine” examines moving past sins, seeing them as part of an ongoing story. “Overland” is a goodbye road tune that namechecks Chicago and San Francisco. “I-89” is a declaration of independence. There’s a cover, of course, the album-ender, “Hundred Miles” by Gillian Welch.

O’Donovan says she flew home to New York from the sessions on the day her second solo album, “In the Magic Hour,” was released. She played to a full house in Norfolk a few months later. Not long after, Jarosz released “Undercurrent,” an album that would win a pair of Grammys. Watkins issued “Young in All the Wrong Ways.” All in 2016. It was the wrong time for an I’m With Her release and tour. So they waited.

“People are like that’s weird that you recorded it and sat on it for two years,” O’Donovan says. “I think it was the only way to do it for us because we’re all so busy. You have to take advantage of the time when we have it. That’s the lesson we all learned: if you have free time and you want to write with people and record, just do it, and you may make a record you are still proud of in two years. That certainly was the case for us.”

They will tour through the summer, lots of festivals, and then wind down in the fall. Watkins and O’Donovan had children in 2017 and have been touring with them. Then they will go their separate ways. “I’m sure I’m With Her will come back in the future,” she says. “We’re all going to do some solo stuff and some collaborations, which I love to do. That’s where I get the most juju from, making music with other people.”

O’Donovan seems genuinely surprised by the group’s reception. “We’ve been on the road now for a really long time,” she says. “The fact we’re still touring and still adding dates is hilarious to all of us. I think we were like ‘How do people still care that we’re playing shows?’ But it’s really special and it’s still fun for us and I guess people see that. ”