Getting a Handle on a Dream 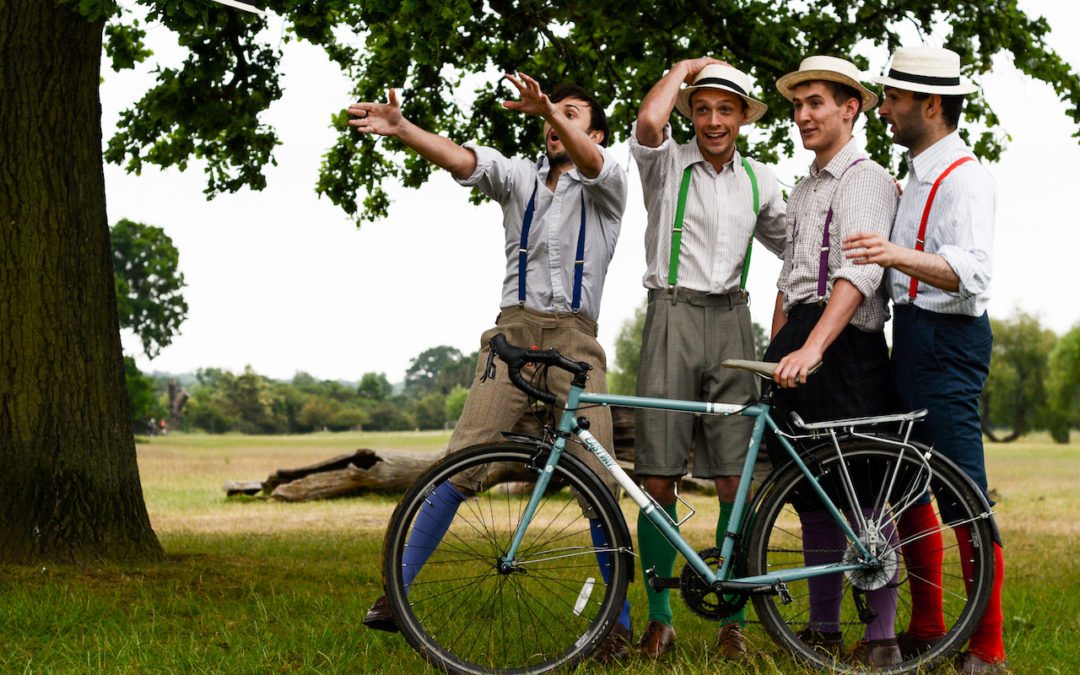 In a Summer of Shakespeare reduced and condensed, of Shakespeare symphonic and abridged and played forwards and backwards; in a world awash with the Bard bowdlerized and modernized, concertized, danced and filmed and videoed, set in outer space, under the sea and turned just about every which loosely expected and unexpected way, The HandleBards bicycling quartets of players just might orbit the outer fringes of the unconventional, or at least the unanticipated.

Their four guy, cycle riding, free admission production of A Midsummer Night’s Dream will spend six days here this May, as part of the Virginia Arts Festival.

In conjunction with National Bike Month, they will cycle between a series of “extremely energetic, charmingly chaotic and environmentally sustainable” performances in Downtown Norfolk’s NEON District and in Ocean View, in Virginia Beach and Portsmouth, before pedaling back to Norfolk.

Midsummer is arguably the perfect Shakespeare play for outdoor production, and for antically disposed approaches. Most of it is set in a magical woodland, where two pairs of path-crossed lovers, either fleeing the anti-romantic displeasure of materialistic parents or seeking respite from the pangs of despised love, get caught up in the backwash of a long-married couple’s squabble.

That contentious couple is Oberon, the King of the Fairies and his wife, Queen Titania, and the spells with which they spar spill onto the four young wood-wandering Athenians, and onto a group of amateur actors rehearsing in secret there.

This is the play that features both the prankster hobgoblin Puck and the famous transfiguration of the punningly named would-be thespian, the rampantly egocentric Bottom the Weaver, into an ass: that is, a jackass. (A bottom is a weaver’s tool, and the British anatomical term is “arse,” so it’s possible that Shakespeare, for once, did not intend this double entendre. On the other hand, he is The Great Punster.)

Paul Moss, one of HandleBards’ founding four back in 2012, made the point when we chatted on the phone, that the setting is meant to be wintry. Europe was experiencing unusually cold winters at the time of Midsummer’s composition, which the play attributes to the discord between Oberon and Titania. (In fact, it was the 1595 eruption of the South American volcano Nevado del Ruiz that caused planetary cooling.)

Midsummer’s glorious mish-mash of interwoven plots, with its genially ham-fisted counterpoint play within a play about love ending tragically, takes 90 minutes in this version to resolve itself into a duly happy ending, with the restoration of normal seasons and a series of weddings, after which the magic of theater is invoked to charm the audience in Puck’s great curtain speech.

Four university graduates, trained in such not-theatrical disciplines as chemistry and geology, “Did not know what to do straight away” after leaving school, Moss said.

Loving the theatre, and wanting to do something that “involved an adventure,” and prompted by the UK’s “doing well in cycling in the Olympics,” they “decided [they] would cross the country [on bikes] and do Shakespeare plays.”

When the name “HandleBards” was suggested, Moss noted, “We suddenly realized ‘We have to do it.’ It was too good a name!”

“We did it again. All of a sudden we turned into a theatre company performing Shakespeare on bikes.”

That was the year they won the Edinburgh Fringe Sustainable Practice Award, according to their web site.

Now they have four separate troupes who travel internationally, doing some 150 performances annually of four different scripts. Sets, costumes and props are all “based on bicycles,” The set of Midsummer, he adds is even “powered by a bike.”

Moss and Dixon will be part of this first American tour, along with Calum McIntosh and Matthew Seager, who each joined HandleBards in 2015.

“It’s different every single night,” Moss says, with “lots of audience involvement…we like to play with our audience. We do have some fun. It’s all about connecting with people… if you have not seen Shakespeare…you will still have a great time.”

Their web page cites perhaps the most convincing review of all: “…one young audience member confessed that we had ‘converted an 11 year old boy into a Shakespeare fan.’”