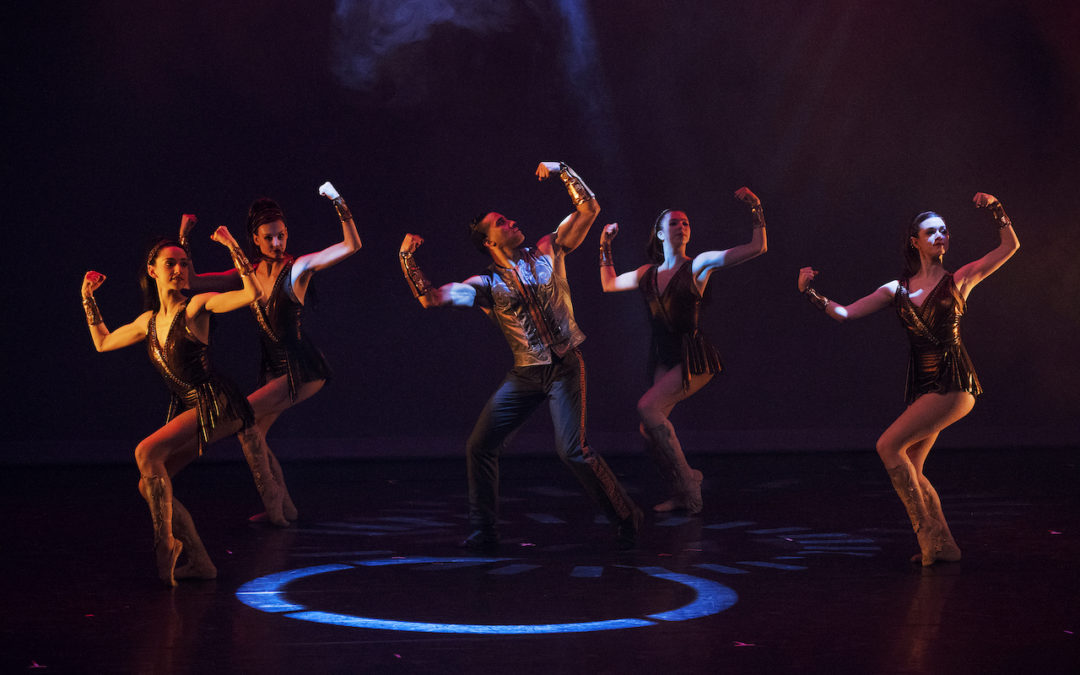 What’s your favorite? Brandy Alexander perhaps. Or the Singapore Sling, a Bloody Mary or a good old Manhattan? Of course you recognize the names as classic drinks made famous by the glamorous stars of the golden age of Hollywood. But, there’s a twist – and a tasty one at that – theses legendary cocktails are also the names of individual ballets or vignettes and they all make up the menu/program for the upcoming performances of the highly inventive New York-based company, Ballets with a Twist being featured at Zeiders American Dream Theater on Saturday May 18 and Sunday May 19.

Hailed by The New York Times as “witty and fantastic” and simply “wonderful” by Dance Magazine, this is a show full of fun, virtuosity, dazzling costumes, enticing music and choreography and stunning dancing. “Like Twyla Tharp’s wonderfully convoluted madcap pieces for the Joffrey and ABT, it seems to be operating on a dozen levels at once” said Dance Magazine.

Founded in 2009 as a unique collaboration between choreographer Marilyn Klaus, composer Stephen Gaboury and costume designer Catherine Zehr, Ballets with a Twist is breaking boundaries, enticing new and younger audiences to the magic of dance and earning the highest accolades from critics and audiences alike.

Cocktail Hour revisits and reinvents the glamour and glitz of Hollywood’s golden age of entertainment with an intoxicating mix of charismatic choreography, exquisite costume design and alluring music. It is a pop-infused experience that brings a sleek 21st century sensibility to the magnetism of the enduring legends of the golden age. In a collection of witty and sparkling pieces, Cocktail Hour is great fun for all ages.  The company of 11 superb dancers, coming to Virginia for the very first time, brings to life the creative genius of choreography, music and costume in an intimate show that is an irresistible blend of night club and theatrical styles.

Choreographer Marilyn Klaus speaks fondly and enthusiastically about the influences that infuse the show. “Having grown up in Hollywood, I used to watch the iconic movies of Busby Berkeley almost every day,” she recalls. “At the time, I didn’t fully realize that his works were created for film. I trained as a dancer and then moved to New York where I established a studio and started creating pieces based on my memories and the glamour of Fred Astaire, Gene Kelly and Ginger Rodgers.” That creative process is still percolating as Marilyn has now created a catalogue or collection of more than 30 of these lively dances, 13 of which will be performed on the program here at the Z.  Taking the audience on a journey around the world, Klaus’ main focus has always been to create an uplifting and memorable experience. “I want the audience to savor the magic of a real night life event as that seems to be something disappearing from our culture”, she adds.

In these performances, you will follow the dancers on trips and treks through tropical paradise -The Mai Tai, an homage to film noir- Boilermaker- but don’t test a ticking time bomb and a steamy night in Havana -Cuba Libre- when sparks fly as rum and cola collide!  Then of course, there’s 007’s famed choice, The Martini, as well as The Shirley Temple (hip hop- scotch), Roy Rogers (rope a dope), Gimlet (lost love and classic jazz) and Singapore Sling (a fan-t-asia on the beauty of cherry blossoms).

Every piece on the program is of course different while all of the music is original, composed by Grammy nominated Stephen Gaboury. Also a producer and performer, Gaboury has been a long time collaborator with pop and rock icon, Cyndi Lauper. Indeed, he just performed with her at Carnegie Hall at the end of April. For ten years, he toured and performed with Lauper internationally and also worked with her on her hit Broadway musical, Kinky Boots. He has also performed with many other legends of our times including Patti Labelle, Suzanne Vega, Norah Jones and Ute Lemper. He has also performed at the Nobel Peace Prize Ceremony and at the New Year’s Eve Times Square festivities. His music has been featured in concerts, on television and motion pictures (including Boyhood and American Beauty). Stephen also regularly directs the Ballets with a Twist orchestra in live performances with the company.

Known for dazzling colors and ornamentations, Catherine Zehr has been creating the stunning costumes for Ballets with a Twist ever since the company gave its first performances. Having worked at some of New York’s major fashion houses she created her own label and line of apparel. She studied art and design at Washington University and at the prestigious New York Fashion Institute of Technology. She and Marilyn Klaus first met when Catherine’s daughter was studying at Marilyn’s school. Catherine of course now has her own design studio and her creations have been seen throughout the country. She and the company of dancers were featured in a highly acclaimed presentation, Designing Costumes for Ballets with a Twist,  at the Museum of the Fashion Institute.

Ballets with a Twist’s Cocktail Hour evokes a time when entertainment was an engaging and vibrant experience. Bringing timeless American spirits to life, the show also evokes the exotic flavors and creations of such legendary Hollywood haunts Trader Vic’s and Coconut Grove.

Drama, mystery, humor, romance — Cocktail Hour: The Show has it all.

Cocktail Hour is also a perfect fit for the region’s newest performing arts venue – the Z – which is dedicated to fostering and introducing new works and exceptionally gifted artists – creating an exciting connection between performers and audience on its thrust stage.

As an added bonus, beer, wine and a special selection and cocktails and mocktails will be available in the lobby.

Ballets with a Twist presents Cocktail Hour: The Show