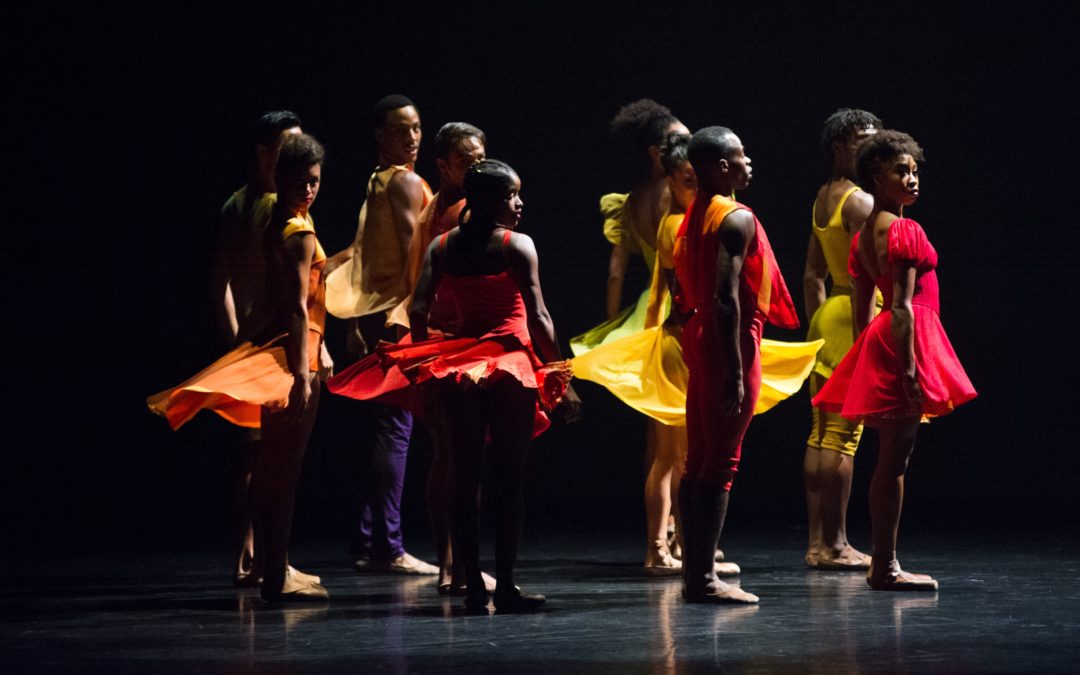 It’s on a rainy Sunday afternoon when I finally get the chance to chat with legendary Dance Theatre of Harlem alum and Norfolk native, Lorraine Graves. Ms. Graves has run her errands for the day, and is now tending to her remarkable mother, a highly cultured woman who will celebrate a major milestone birthday later this year.

There’s a whole lot to talk to Ms. Graves about. Dance Theatre of Harlem is not only returning to Norfolk’s Chrysler Hall for several performances as part of this season’s Virginia Arts Festival, but the iconic ballet company is also celebrating its 50 year anniversary. In celebrating that milestone, VAF and the Slover Library are presenting an exhibition entitled, Dance Theatre of Harlem From Black and White to Living Color, which chronicles the company’s half century through archival photographs, costumes and other DTH memorabilia. Ms. Graves’ 17 year career as a principal dancer with DTH is prominently featured in Slover’s exhibit, which is curated by Judy Tyrus and on view through May 7th.

“He was like a father to a lot of us… I say that because, we, lots of times, spent more time with him—being on the road with Dance Theatre of Harlem, and in New York…than we did with our own families,” Graves confesses, speaking about DTH’s legendary co-founder, Arthur Mitchell, who passed away this past September at the age of 84.

In its lengthy obituary of Mitchell, The New York Times wrote, that he was the “first black ballet dancer to achieve international stardom, was one of the most popular dancers with New York City Ballet, where he danced from 1956 to 1968, and displayed a dazzling presence, superlative artistry and powerful sense of self.” Mitchell also made history when he founded, along with Karel Shook, Dance Theatre of Harlem in 1969, just a year following the assassination of Dr. Martin Luther King, Jr., an event which greatly troubled Mitchell, and inspired him to want to start a school for impoverished Harlem youth—teaching them classical ballet.

Dance Theatre of Harlem is regarded as the country’s first African-American, classical ballet company, and has been dazzling audiences since its very first public performances in 1971. Graves joined DTH in 1978 and soon become not only principal dancer, but ballet mistress. “We were out there disproving the myth that blacks can’t do classical ballet…there was a mission,” says Ms. Graves, reflecting on those times. Her dual roles led to a decades-long friendship with Arthur Mitchell. “Even after I left the company, I went with him to stage his ballets.” She was actually assisting him with the ballet that he was working on, prior to his passing. That work will premiere this month.

When Dance Theatre of Harlem plays Chrysler Hall in May, they will premiere a commissioned work that commemorates the 400 year anniversary of the first recorded arrival of Africans to English North America. The 20 minute ballet, appropriately named Passage, is choreographed by Claudia Schreier, and set to a brand new score by Jessie Montgomery. Claudia is a Harvard-educated, exciting young choreographer, whose award-winning work has been heralded by publications like The New York Times, Dance Magazine and Elle. The new piece is commissioned by the arts festival, and the 2019 commemoration, American Evolution. Passage features 12 dancers —6 men and 6 women.

Claudia is a native New Yorker, and was home when I reached her by phone a couple days ago. “When I first listened to Jessie’s music, I was really taken with it, and over the course of the next several months, we spoke about creating a work specifically for this commemoration,” Claudia recalls. “It’s a real honor to be able to take this moment and look back to see how we move forward.”

Despite how it’s perhaps being advertised, she doesn’t view the ballet as having movements per say, but does acknowledge that the music has “a lot of ever changing moments.” She says that the idea of water as a metaphor is alluded to in the piece, but the goal is “really to have anyone take from it what they wish.” The process of creating the work has been a special one for her, in part as a woman of color, and as someone who values the impact of Dance Theatre of Harlem on culture, and the dance world at large. The ballet, however, does not make some grand statement about say— the horrors of slavery, or allude to the specifics of the introduction of Africans into the Virginia Colony.

“I kind of bristle at diluting, what is such a profoundly excruciating moment in our history…” Claudia says, towards the end of our conversation. “I think I’m more interested in ‘this is what we’ve created,’ and I hope it makes you feel something.”

One of DTH’s founding members, and its current Artistic Director, the great Virginia Johnson, is very excited about the new work being premiered here in Norfolk. “It is such a jolt of electricity, to understand that the music for this ballet was created for this choreography, and this choreography was created on these dancers’ bodies, to be an expression that aligns with the commemoration,” says Johnson, who rings me from NYC, following a meeting. She is also excited for DTH’s 50 year anniversary, but acknowledges that the recent passing of Arthur Mitchell, who she was obviously close to, makes this moment somewhat bittersweet.

“I’m so grateful to Arthur Mitchell for creating Dance Theatre of Harlem. He completely transformed my own life…and really made such an impact on this field.”