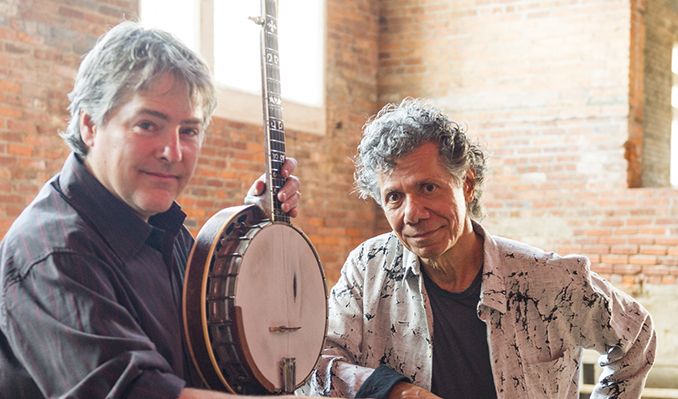 The list of Bela Fleck’s collaborators is a head-spinning kaleidoscope through modern music.

Fleck, who has won 10 Grammy Awards and been nominated in more categories than anyone, and Corea, who has more than 20 Grammys and has been nominated more than 60 times, bring their magic to the Sandler Center for the Performing Arts on May 11 as part of the Virginia Arts Festival.

Fleck squeezed some time while working on a new bluegrass album to answer questions about their collaboration.

Veer: Tell me how you came to work with Chick Corea.

Fleck: I’ve been a fan of Chick Corea’s for so many years — after seeing him perform at the Beacon Theatre in 1975 it pretty much changed my life and made me want to be a lot more adventurous about music. Years later, after I started Béla Fleck and the Flecktones, I met him at the Grammys and it led to me inviting him to play on a few songs on a recording for me. To my surprise, he agreed to do it.

Several years after that he contacted me and invited me to do a duet album project. Ever since then we’ve been performing together nearly every year. I absolutely love it.

Veer: You two released an album in 2007, then came back with a live two-disc set in 2015. What’s the difference for you playing with him live?

Fleck: Live is the bomb man. To play with one of the greatest improvisers in the world is such an honor and a thrill. These songs grew so much as we toured year after year that they seemed almost new. I was excited personally to show the growth we had achieved. That first record is something I’m very proud of but the live album to me is a whole ‘nother thing.

Veer: You have collaborated with many artists. What’s the appeal? Is there a restlessness to your work that needs different stimulus?

Fleck: I love having to work hard to play new music and I love learning new things on the banjo. Everything that I learn teaches me something and gives me information to build with for future projects and improvisations.

I could say that I have a short attention span, but it’s truly what I always thought a musician was supposed to do, explore and grow through a whole career. The musicians that inspire me do this. Chick is one of them.

Veer: Can you describe the feeling when you know a collaboration is working?

Fleck: It starts to get real easy once you’ve done the practicing legwork – and most importantly played some live shows. It should be challenging but not impossible. Chemistry is a real thing, too. You should find yourself playing things you never would have played in any other setting.

Veer: Was there a moment in the studio or on the stage when you knew it was working with Corea?

Fleck: We recorded a duet for “Tales from the Acoustic Planet Vol. 1” called “Bicyclops,” which was a life highlight. I knew that we’d be great collaborators from then on, if it ever came to be.

Veer: You each have epic catalogs. Is there a set list each night? How do you decide on what to play?

Fleck: We usually pick things out before each tour, a few new things and stuff that we still feel there is lots of juice left in from the rep. Often, we meet a night before the first show and throw some ideas around. Then we usually play those tunes and be spontaneous within them, rather than pulling lots of different material.

Veer: We first talked about 25 years ago for a Flecktones story in American Airlines magazine. You will go out with the Flecktones this summer for their 30th anniversary. It’s the most extensive tour in a while. Tell me about deciding to do that.

Fleck: We starting doing Flecktones as a regular thing again several years back, after a lengthy break. It felt so good to get back together, that it felt that we must not be doing enough. Now we are looking for the right amount. This year we’re doing quite a bit more and we’ll see how that feels for everyone. I suspect it will be a blast.

Veer: You have two children now. I wondered if that has changed your viewpoint or how you approach your artistry.

Fleck: It changes how much I want to be away from my family. Otherwise, I still have the same musician drives. I have three projects in the can now, so figuring out what to do with the creativity can be challenging.

Veer: You met Abigail playing at a Nashville square dance. I wondered if you’ve played one since.

Fleck: We have not, but we are playing a lot of duo shows with the whole (family) and in tow. That’s a pretty sweet experience, perhaps the greatest of all.