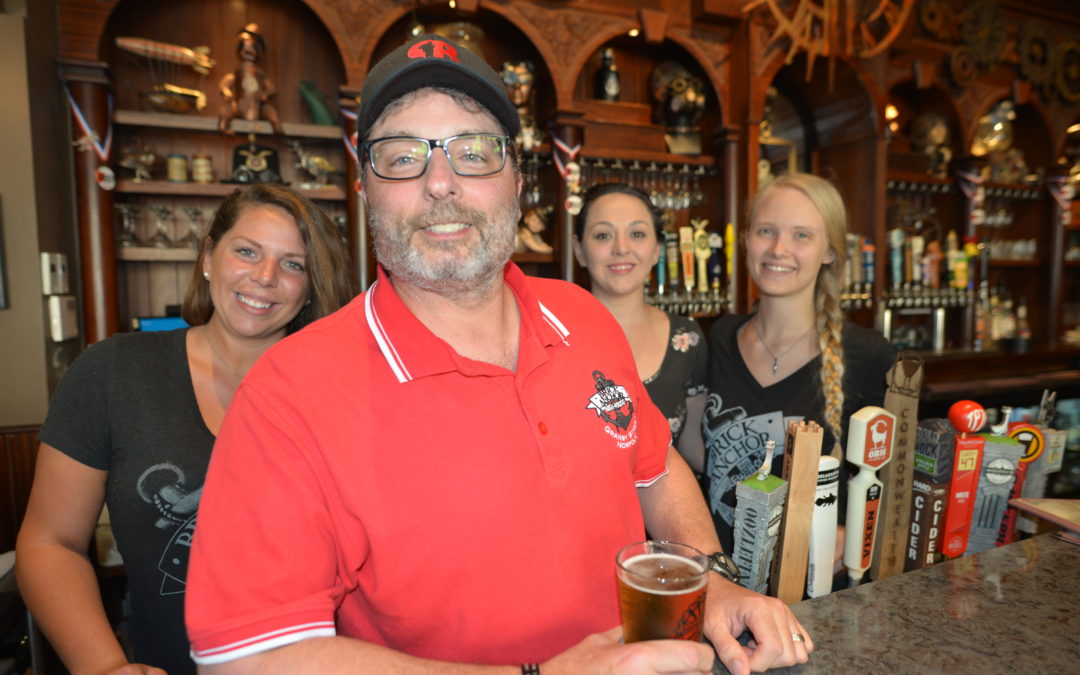 Some of the best, free-flowing conversations can be had over a beer — or any cocktail, glass of wine and dinner.

I have always found this to be true, and especially when traveling.

Recently, I gave Brick Anchor Brew House owner Phil Smith a shout so we could catchup for a beer. I hadn’t chatted with him much since my daughter’s wedding reception was held in late November in the warm, cozy event space on the second floor of the restaurant.

While the space maintains the warm exposed brick, wood interior, and gloriously large wooded bar, Smith and company were keen to breathe a new life and vision in the form of steam punk aesthetics with a tip-of-the-hat to Norfolk’s history.

Today, Brick Anchor Brew House features a large selection of Virginia-made craft beers as well as those from around the globe. Smith maintains a tap for Paulaner, one of his favorites from when he was stationed in Germany.

In addition to offering 60 taps of beer along with wine and every imaginable mixed drink, Brick Anchor serves lunch, brunch, dinner and late night fare. Menu options include everything from the 10-ounce Bayern Pretzel and Brick Wings to the Hail Caesar Salad and Tuscan Salad, Drunken Mussel Pasta, Basil Chicken Risotto and Honey Salmon to Way Beyond Burger and Vegan Bratwurst.

Phil poured himself a new beer from Cape Charles Brewing Company and I ordered a Starr Hill The Love (wheat beer) to get this conversation started.

What was your first-ever beer and how old were you?

The first beer I ever had in my life was Genesee Cream Ale. I was 12 years old in Buffalo, New York.

No, my older brothers would just give it to me when my parents weren’t around. It was a close-knit family taking care of each other.

Did your underage beer drinking continue into your high school years?

Yes, it did, unfortunately.

When I was growing up the drink age in New York state was 17. I used to skip out of high school often in downtown Buffalo. I didn’t drink beer at that time; I drank schnapps. It was very cheap and very close by.

I really didn’t start drinking a lot of beer until I joined the Army and went to Germany. That was 1986.

How long did you serve in the US Army?

What was your rank when you exited the Army?

Beyond Germany, what foreign countries did you find yourself in?

I was really all over Europe. If you name the country, I was there. I did some deployments into Bosnia and Kosovo.

It is often said that when American service members are stationed in Germany that experience is what led them to fall in love with beer. What did you learn about beer being stationed in Europe?

When I was in Germany it really opened my eyes as to what beer could be — the potential — much like, in America, wine has so many varieties and so many different tastes.

When I left Buffalo, New York after college, going into the Army there were basically three beers: Miller Lite, Pabst Blue Ribbon and Genesee Cream Ale; at least in Buffalo.

I thought that was pretty much it until I got to Germany and then traveled around Belgium — fruit beers, sours. I really fell in love with the Munich area, Bavaria with their brewing purity standard. It was shocking that there was choice and you did not just have to have a canned commercial-type beer. Every little village had their own brewery with their own spin on beer. It really became a fabric that was much more colorful in my life.

What led to your decision to open Brick Anchor Brew House in a space formerly home to an Irish pub?

Firstly, the reason I wanted to open a bar and have a lot of beers was because of my time in Germany. I saw myself in a different place as far as having the ability to bring lots of different beers to people who like that.

After my retirement from the Army, I fell in love with Norfolk, even though at first I kind of stiff-armed Norfolk because when I was stationed at Fort Monroe 20 years ago you did not come to downtown Norfolk. It was not a place to be if you had family.

I saw the vitality, the energy. I saw this building and all the potential it had. I saw the synergy and youth coming downtown, and it was just a vibrant place where I thought we could fit.

We went from opening up and putting a couple of posters up like some bars do to really wanting to give it a personality that matched the area. We decided upon a kinda steam punk, industrial sort of feel due to our research in the Slover Library of Norfolk achieve photos. We saw pictures of the Zeppelin USS Roma over the Brick Anchor Brew House back in 1922. We saw pictures from ‘40s of rail lines running up Granby Street. And here were are in the largest Navy port in the world with aircraft carriers and submarines. We just thought it makes a lot of sense to pay homage to the history of the city and also the currentness of the city. That’s how we came about it. I wanted to really be part of the community and I wanted the community to have choices in beer especially.

We we did open in March of 2016 we had the most taps in Norfolk. 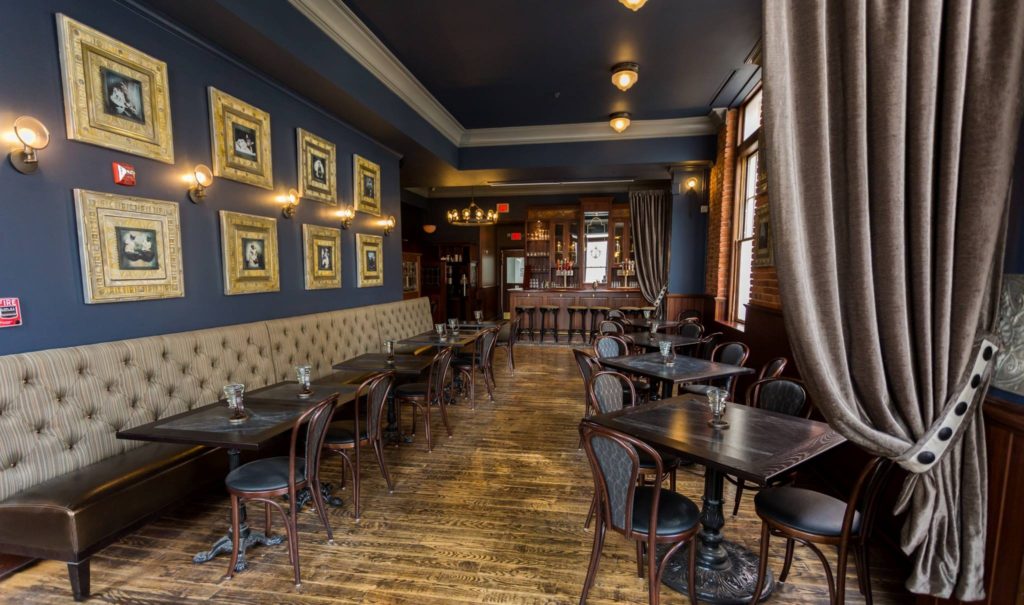 (The second floor private rental space where the room is the view. Great for company parties and wedding receptions.)

Since you opened, are there specific beer styles or brands that are most popular with customers, or is it whatever is the newest flavor of the week?

We have a cooler here that was just made for our Virginia beers. That’s a least 20. Those are on our front bar.

We have a total of 60 taps and, frankly, I wanted to make sure I didn’t involve myself too much in the beer selection process because I am not a professional beer taster. I love pilsners, and I know a lot of people don’t but pilsners and lagers are what I loved about Germany. But I know if I only had 60 pilsners and lagers, especially since craft beer and breweries often time shy away from those because of the longer time it takes to brew, that it would probably be me and five other people who like lagers all the time.

I leave it to people who know a lot more than me, especially my bar staff. They keep in touch with what we need to have and keep bringing people back.

I have found the Virginia beers still sell very well. I think that’s great because we’re supporting our community. I think the local breweries sell the highest percentage of all of our beer.

We get a lot of people from out of town who want the local beers. I think that speaks volumes of how far the Norfolk and Hampton Roads area have come in their reputation and quality.

Does Brick Anchor have a peak season or is business consistent year-round?

I think we are cyclical like all other restaurants. One of the advantages we have that others do not is that we have a terrific event space — really two of them. We get very well-booked through May. We have over 25 events booked for the month of May from 15 people to 200 people. I would say May and December with our holiday parties are our busiest months.

Behind the bar there is a small Buffalo Bills helmet spinning in midair. What is that?

The name Brick Anchor is a homage to this city, the building, the bricks etcetera. Anchor is also my covert way of paying respect to my hometown of Buffalo. The Anchor Bar in Buffalo is where (Buffalo) chicken wings were invented. So I wanted to give a nod to a city that often times doesn’t get a lot of nods but gets more snow.

They are very good.

In Buffalo there’s two flavors: hot and BBQ. Not like these places that have 80 different selections.

There’s only a couple ways to do it. We do it right. I encourage people to come here for our chicken wings. I believe ours are the second closest to Buffalo after Dirty Buffalo, who I happen to love.