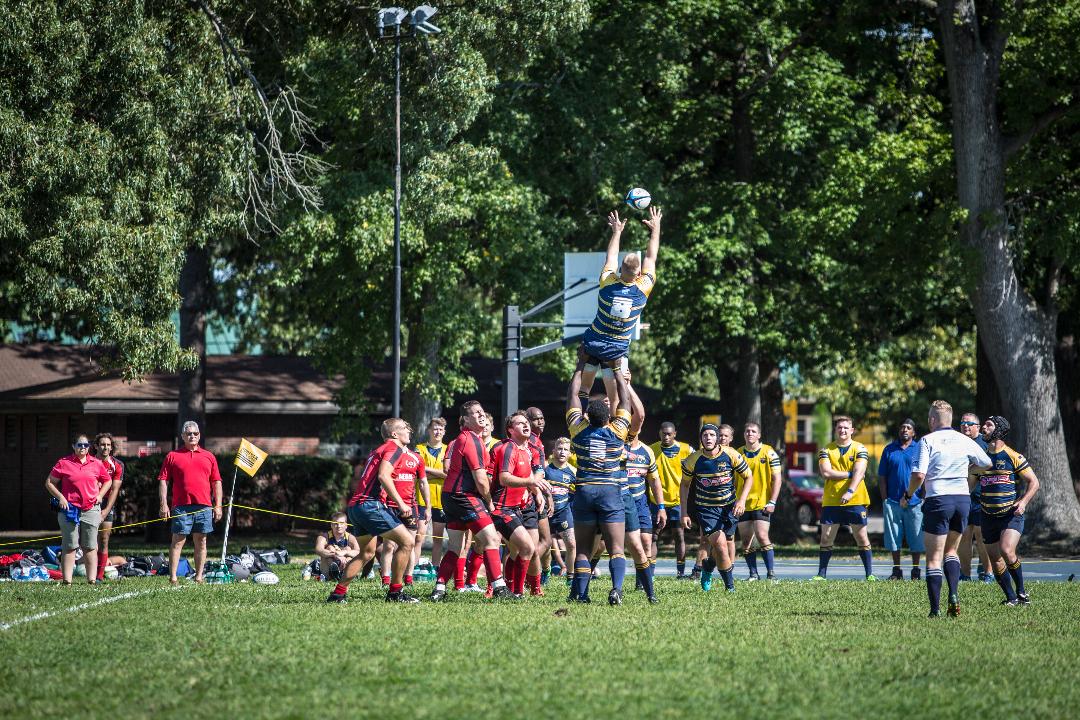 As part of this year’s Norfolk NATO Festival, a friendly rugby match between the Norfolk Blues and the fearsome XV du Pacfique French Army Rugby Team will be played Sunday, April 28 at ODU’s Powhatan Field beginning at 6 PM. Admission is free and open to the public.

The event is being organized by three Frenchmen stationed in Norfolk in service to NATO’s Allied Command Transformation headquarters.

In addition to this exhibition match, Francois du Cluzel, Christophe Bouthiaux and Philippe Baillot have been actively working with local youth groups to promote rugby at all scholarship levels. They’ve developed a very detailed plan for developing rugby from the group up and teaching the core values of rugby: teamwork, respect, enjoyment, discipline and sportsmanship.

I recently sat down with Francois, Christophe and Philippe over coffee to discuss their mission.

With this rugby match, from the French perspective, why is this something you are eager to do?

Christophe: First of all, it’s because we are here in Norfolk and it’s good to share the values of rugby.

The French team is Polynesian military so they can share the culture of Polynesia, the French military values and, of course, the rugby values.

How popular is rugby in France today?

Francois: Rugby is part of the French culture everywhere. Initially, it was in the south of France, but now it spreads all across the country.

Rugby was developed in the 19th century coming from England. It’s as popular in France as soccer.

We have every age player including women in France who play rugby.

What would you like the American audience in the stands to learn about the technique and quality of the French rugby team?

Philippe: The purpose is to ensure the American audience is going to understand what is rugby. As Chris said before, it’s a question of the virtues of courage and solidarity in playing together which is paramount for us. It’s a game, but it’s more than a game.

I know you feel passionately about expanding the popularity of rugby in America and primarily in Hampton Roads. Can you share your feeling about this?

Francois: With Chris and Philippe, we started two years ago to develop youth rugby because we thought given the virtues that rugby brings with it we should start at the lower level to create a fanbase. And maybe that fanbase can grow up to the high school level and universities, and eventually make the Hampton Roads area a kind of stronghold for rugby.

Christophe: I agree with Francois. We can say that rugby is really popular here in Norfolk because the Norfolk Blues are 41 years now.

Our goal is with the schools and the younger people to be able to build the base for rugby for the future. Rugby is one of the growth competitive sports for the USA in the last 5 years. I think the future is here for rugby.

What are some of the techniques and training exhibited in French rugby that can be applied to American youth players?

Christophe: Rugby is a very good sport because there is virtue and values, but also because it teaches coordination and developing the abilities for the kids to run with the ball, to be aware of the surrounding and, of course, to share the ball with your teammates.

Rugby is a very old sport and it comes from competitive combat sports where the big guys get the ball for the fast and little guys. It’s a good picture for the life it is. It’s good for the kids for that reason.

American football is similar in some respects to rugby. Do you think this makes it easier for Americans to have a general knowledge of the game or more challenging to grasp the concept of rugby?

Francois: It’s very similar but at the same time very different. First, because we have to sustain a very long effort in rugby — 80 minutes. There’s no stop or breaks as there are in American football. It’s a very tough game.

Secondly, you need to know that you are right that there are lots of common things with technical skills that are very useful. If you know how to play American football, you have the kind of assets for rugby.

We have a lot of players, especially the high schoolers in the Hampton Roads area, coming from American football with the kind of technical skills that we definitely need for rugby.

But, of course, it’s completely different because you have to sustain and support your teammates all the time, which makes it a very different kind of game.

Do you see this match as an annual tradition or is it a one-off game?

Francois: It is not the case for the moment. It’s a single event that is not supposed to occur every year.

Of course, if we want to develop and give great visibility to rugby this is something we need to consider. There are lots of opportunities with rugby. We can even consider organizing a beach rugby tournament on a yearly basis.

Do you have any additional thoughts on this rugby match or regarding your educational mission with youth rugby?

Philippe: I couldn’t agree more than what was said by my mates. I would add that this is also about social solidarity, which is very important because everybody cooperates whatever their size.

Christophe: Before the main event, our high schoolers will play against Newport News for the championship at the same place – Powhatan Field. It’s going to be a championship match between our kids and the Newport News team.