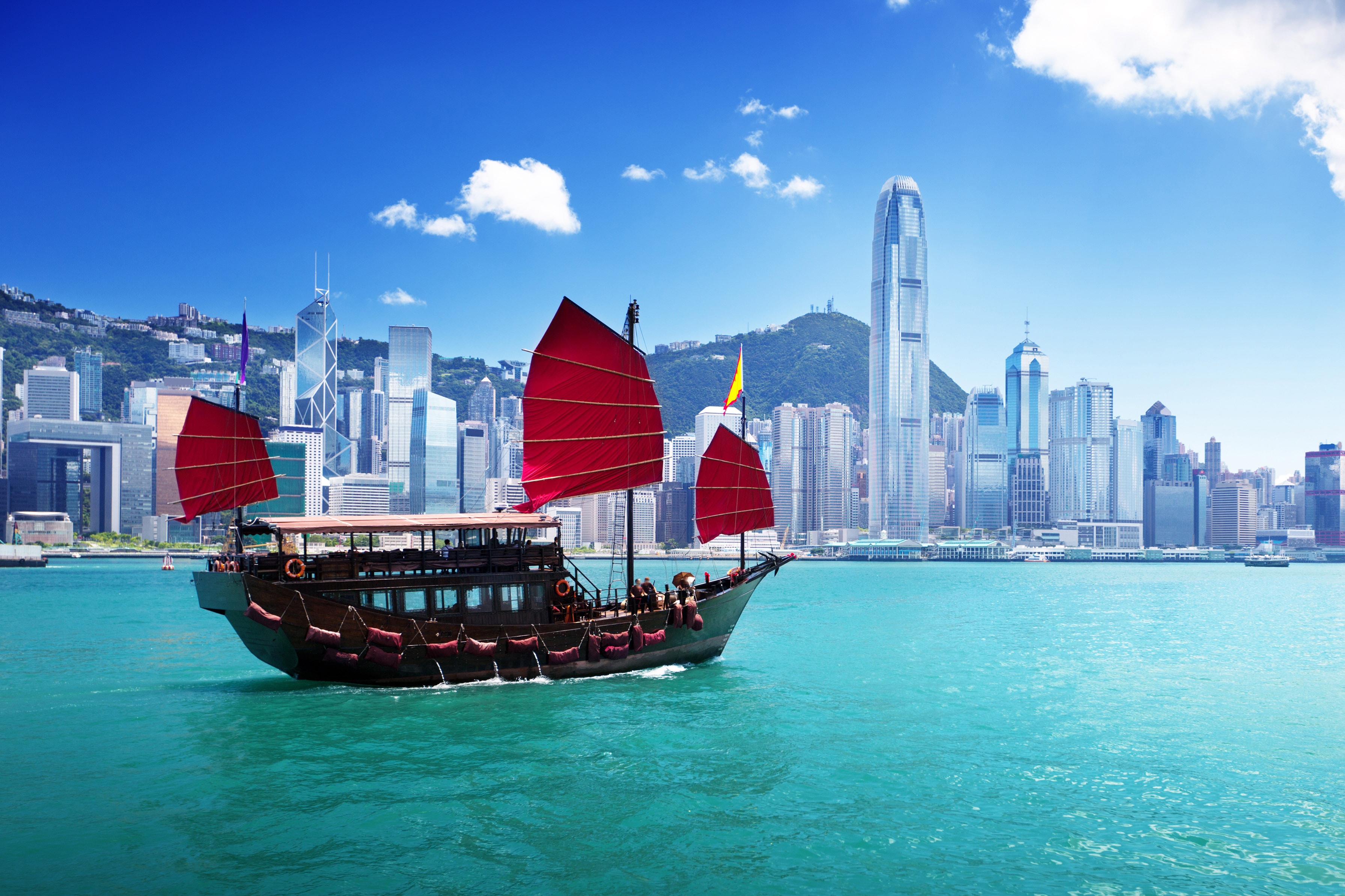 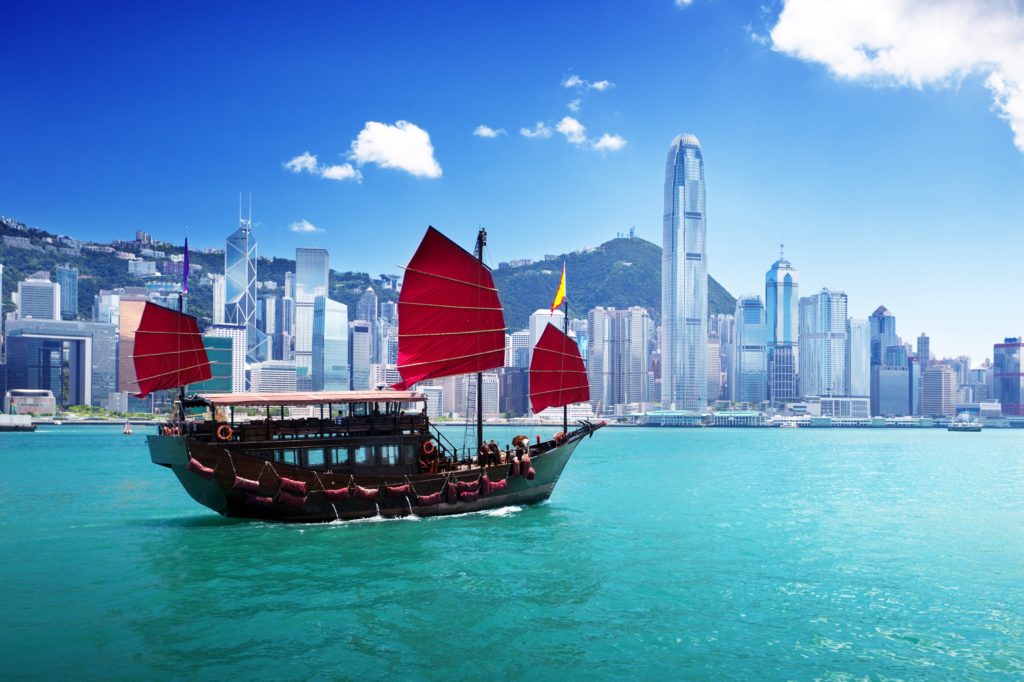 (Hong Kong means “fragrant harbor” and the junk Aqua Luna, handmade in the traditional way, is ideal for experiencing its charms.)

Hong Kong has long captured my imagination with its split Sino-Brit personality; complex, opium-clouded history; and contemporary cosmopolitanism. So when Cathay Pacific launched a non-stop flight from Dulles recently, I realized that a four-day weekend there wasn’t the crazy idea it once was. The flight leaves at a quarter past midnight, and lands at “Asia’s World City’s” international airport 15 hours and 45 minutes later. Because this LED mood-lit A350-900 is remarkably quiet (the most hushed in its class, ideal for engaging in its chair yoga videos) and quite comfortable (even in premium-economy and economy – but especially in business class, its highest, with fully-flat beds), sleep is more than a dream. You actually can arrive sightsee-ready.

Navigating Hong Kong is easy with signs written in English and Chinese (just remember that traffic follows the British style of driving on the left, so heed the “look right” and “look left” cautions painted in crosswalks – and watch out for double-decker busses!) and elevated walkways among buildings cultivate a pedestrian-friendly atmosphere (also watch out for throngs of Asians in designer duds with eyes glued to phones, necessitating admonishments on moving sidewalks: “Look up from your phone”). It all allows for adventure that, like the 8,153 mile flight on Hong Kong’s flag carrier, is non-stop.

Checking In – Lodging options abound for every budget, but to do Hong Kong in style, stay at its most famous, the Mandarin Oriental (the one that launched the storied brand). Feng shui applied to both old world grandeur and today’s comforts means nothing is overlooked from big things (a second LCD in the opulent bathroom to watch telly while soaking in the tub) to little ones (complimentary treats delivered daily like dragon beard candy, as wispy as cotton candy, once reserved only for Han Dynasty royalty). Its location in Central (Hong Kong’s city center), between not-to-be-missed Victoria Peak and Victoria Harbour, makes a perfect base with tons to do under its own majestic roof (stay tuned).

An Afternoon in the Park – Sprawling Hong Kong Park offers lush greenery and birds, tai chi spots, and a peek into the area’s history at Flagstaff House. The two-story Greek Revival building served as office and residence of the Commander of British Forces in Hong Kong for more than a century until 1978, and now is home to the Museum of Tea Ware, exhibiting vessels dating back to the 11th century B.C. and promoting Chinese tea culture.

Some Dim Sum – When hordes recommend a chain restaurant for dumplings and baked bbq pork buns (one with U.S. outlets at that, horrors!), diehard foodies rush in the opposite direction to sniff out their own hidden gem. With Tim Ho Wan, however, the masses are right. How many inexpensive eateries can claim a Michelin star?

Water, water everywhere – Hong Kong encompasses many islands, so one of the best ways to drink in the panorama of mountains and high-rises competing to define the skyline is by water on Aqua Luna, a wooden junk handmade by Wong Kin-kao, one of the last craftsman of his kind constructing the traditional curved hull boats with red sails (though this junk and its sister, Aqua Luna II, are motor-powered). Cruises run throughout the day on Victoria Harbour, but book one for the evening as skyscrapers’ decorated facades dazzle with a pulsating light show nightly.

In the Market –Take the legendary Star Ferry across the harbour to the Kowloon peninsula. Shop, er haggle, in endless stalls of designer knockoffs (fakes, sure, but what Asians call A-grade – still a well-made product) in the Mong Kok neighborhood’s Ladies Market (so-called because it originally sold only women’s clothes, but I know what you were thinking!). It’s open daily, early to late. The Goldfish Market and screeching Bird Market are nearby.

Rock Stars – Not just a neon-animated urban jungle, “the fragrant harbor” is full of verdant countryside and, at the Sai Kung region of the Hong Kong UNESCO Global Geopark, glimpses of geological prehistory. Sampans, once used as fishing boats now plied for the tourist trade, take you up close and personal to view stunning hexagonal volcanic rock columns. At low tide, you can cross the tombolo (a natural bridge of sand and rock) between Sharp Island and Kiu Tau Island. Stargaze at the geopark’s High Island Reservoir.

Hooray for Hollywood – Browse art galleries and antique shops along Hollywood Road, one of the territory’s oldest streets, stopping at a cozy sidewalk café or wine bar. Witness supplicants bowing before the formidable statues at incense-suffused Man Mo Temple, dedicated to the gods of literature (Man) and war (Mo). An unlikely duo? The combination well-suited those studying for civil exams in the Ming and Qing Dynasties.

Soothing Session – Even before assuming the face-down position on the massage bed, zen envelops you at the Mandarin Oriental spa. Prepare with its Chinese herbal steam room, relaxing tepidarium (containing heated, body-contoured, tiled beds), and ginger-spiked honey-lemon elixir. Once your treatment (such as Oriental Essence, inspired by traditional Chinese practices and modern techniques) commences, your contented sighs will harmonize with the lilting, meditative airs, and the sole thought as your therapist erases all trace of tension will be: “Don’t stop.”

Celestial Drinks and Dinner – Mixologist Slamet Haryadi had to scramble up a mountain in Sweden foraging all the ingredients save gin for his Black Forest cocktail to claim victory in an international spirits competition. You just have to ascend to the Mandarin Oriental’s top floor to enjoy its juicy berries and subtle charcoal (Haryadi derived it from a fallen tree during the contest) at M Bar. Then move on to dinner at adjacent Michelin-starred Man Wah. Breathtaking views and superlative service complement an exquisite Cantonese meal that might include sea urchin pudding, barbecued Iberian pork loin with dragon eye honey, and deep-fried lobster.

So yes, you can conquer Hong Kong in a long weekend. But if you have more time, Cathay Pacific’s non-stop flight is a gateway to the rest of Asia without long layovers. You might desire one, though, since business class allows access to several lounges boasting noodle bars, tea houses, coffee lofts, and foot massages (no wonder Hong Kong International Airport won Skytrax’s 2018 “Best Airport for Transit Passengers”). Hmm, Shanghai has long captured my imagination, too…

Got food, beverage or restaurant news? Contact Marisa at marseydining@aol.com