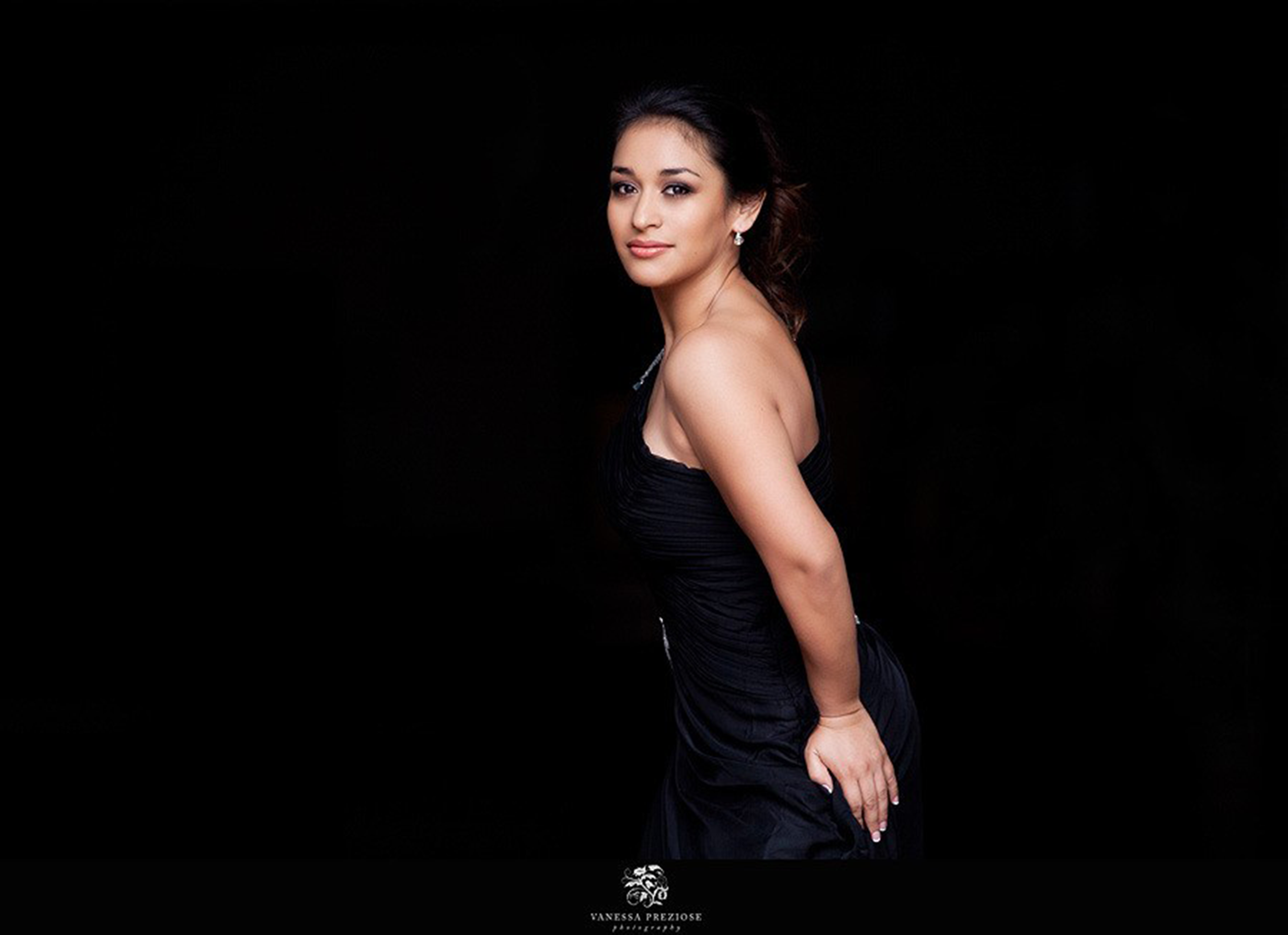 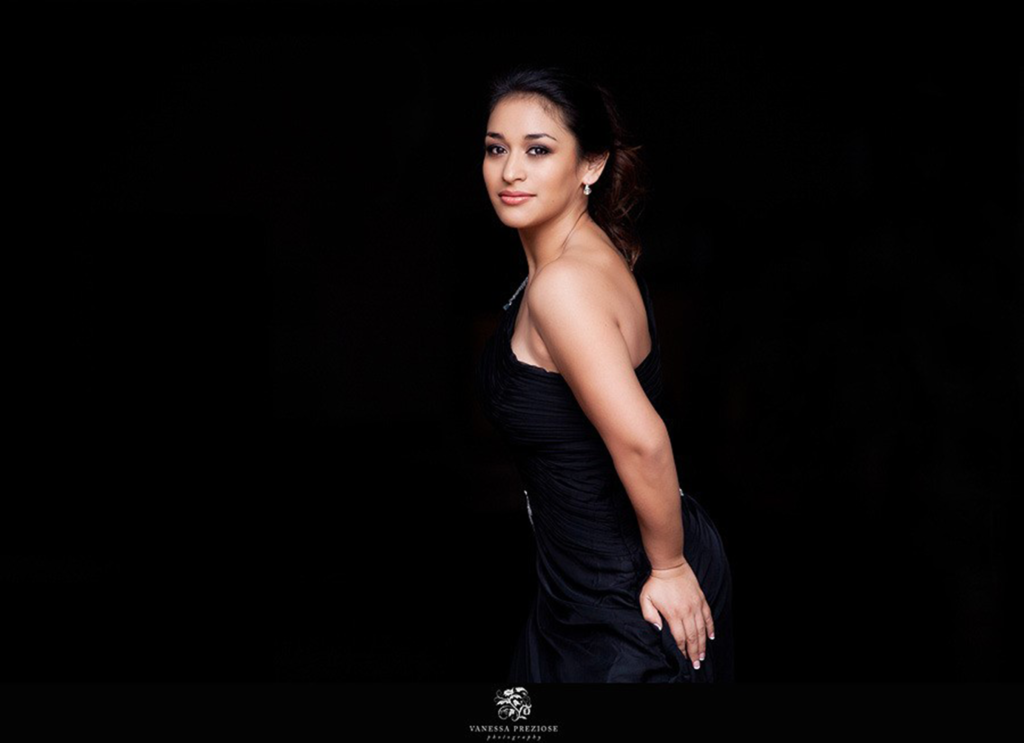 (Cecilia Violetta Lo’pez, whom Opera News listed as one of “25 Rising Stars,” performs the role of Adina)

A sparkling romantic comedy fueled by that dangerously explosive mix of glittering gold and fermented grape, Donizetti’s Elixir of Love comes to the Virginia Opera under the guidance of stage director Kyle Lang, whose VO productions of La Boheme and Lucia di Lammermoor garnered critical and audience praise in 2015 and 2018.

Elixir, the most performed of Gaetano Donizetti’s 75-odd operas, and perhaps the opera world’s most popular rom-com, offers up a triangle of wealthy young heiress, naive younger admirer and conniving military non-com. (According to Donizetti scholar William Ashbrook, this 1832 composition was the most popular of all operas in opera loving Italy for the full decade of 1838-48)

The three-sided structure of characters Adina, Nemorino and Belcore spins around an axis provided by an itinerant snake-oil salesman, the self-styled Doctor Dulcamara.

Adina is the rich landowner, Nemorino an adoring peasant, and Belcore a Sergeant who has his own eye on Adina. Dulcamara’s “love potion,” which he sells to Nemorino, is just cheap wine.

After a web of proposals, acceptances, reversals, self-sacrificing grand gestures, self-confident (tipsy bravado?) overtures and playing hard to get has been spun, augmented by the revelation of a sudden inheritance, the good guy does get the girl. However, the popularity of Elixir rests on more substantial foundations than the simple appeal of romance and laughter and what used to be called “the battle of the sexes.”

“Audience members,” Lang maintained in a telephone chat about the upcoming production, “can open up to seeing themselves mirrored” in each of those characters. “A lot of that has to do with the day”, he said, since each one of us carries the seeds of generosity (Adina) foolishness (Nemorino) or different sorts of self-interest (Belcore and Dulcamara).

Lang sees Adina as being somewhere in her mid- to late-20’s (which was getting on in years for an unmarried woman in the early 19th Century). “She’s kind, outgoing … she is a generous employer, very multifaceted…direct and driven. For a young lady to run a business she has to be pretty forward.” In contrast, she initially sees the infatuated Nemorino as being “so lackadaisical” as a polar opposite of her “goal oriented and focussed” nature that she is annoyed by his attentions.

After all, they live in “a small town and it’s hard to escape anyone in a small town. Everywhere she turns he’s going to be there, especially if he’s following her around.”

Belcore, the Army sergeant who chases Adina, is “something of an egomaniac.” “He’s after her because she’s the most popular,” Lang notes. Belcore wants both “her dowry and bragging rights of ‘I got the most successful girl in the land!’.”

Dulcamara is an “honest liar.”

“He has very selfish motivations but with the best of intentions. He wants to be social, but he’s trying to ‘do’ people into things…selling cheap wine as if it were Channel #5… trying to sell magic…If you’re dumb enough to believe him that’s a bit on you.”

However, the wine and the belief in the magic of a love potion do give the innocent Nemorino enough self-confidence to win his lady’s heart. Furthermore, when all the village lasses begin fawning over Nemorino, he’s convinced that the elixir is genuinely effective. What they have just learned, though he has not, is that he has inherited great wealth himself.

Lang, who has worked with the three male leads before, says the show has an “Awesome cast!”

“They are all incredible musicians, incredible actors as well and incredibly versatile.”

As Dulcamara, Matthew Burns will “definitely play this guy like no other. He’s always so clean and gregarious. He really will bring…warmth to the character [so that] people are attracted to him.” (Burns lives in the memory of anyone who saw the VO “Midsummer Night’s Dream” for his performance as Bottom.)

Alexander Birch Elliott, “is super talented, with a fantastic voice. He’s so versatile as an actor,” and is possessed of “that kind of swagger” necessary to his character of Belcore.

Carlos Sanelli – Nemorino – “has this quiet sensibility that I think that will really …perpetuate Nemorino’s kind of lovely honest ignorance….I think that Carlos is … probably one of the best tenors I have heard in recent years – so extremely talented.”

The role of Adina is played by Cecilia Violetta López, whom Opera News listed as one of “25 Rising Stars” and whose acclaimed and prize winning career has taken her all over America, to Europe and to the Met.

Donizetti’s opera silently poses one question: What is the truly effective, the real “Elixir?” Is it alcohol? Self- assurance? Or money?

The Elixir of Love