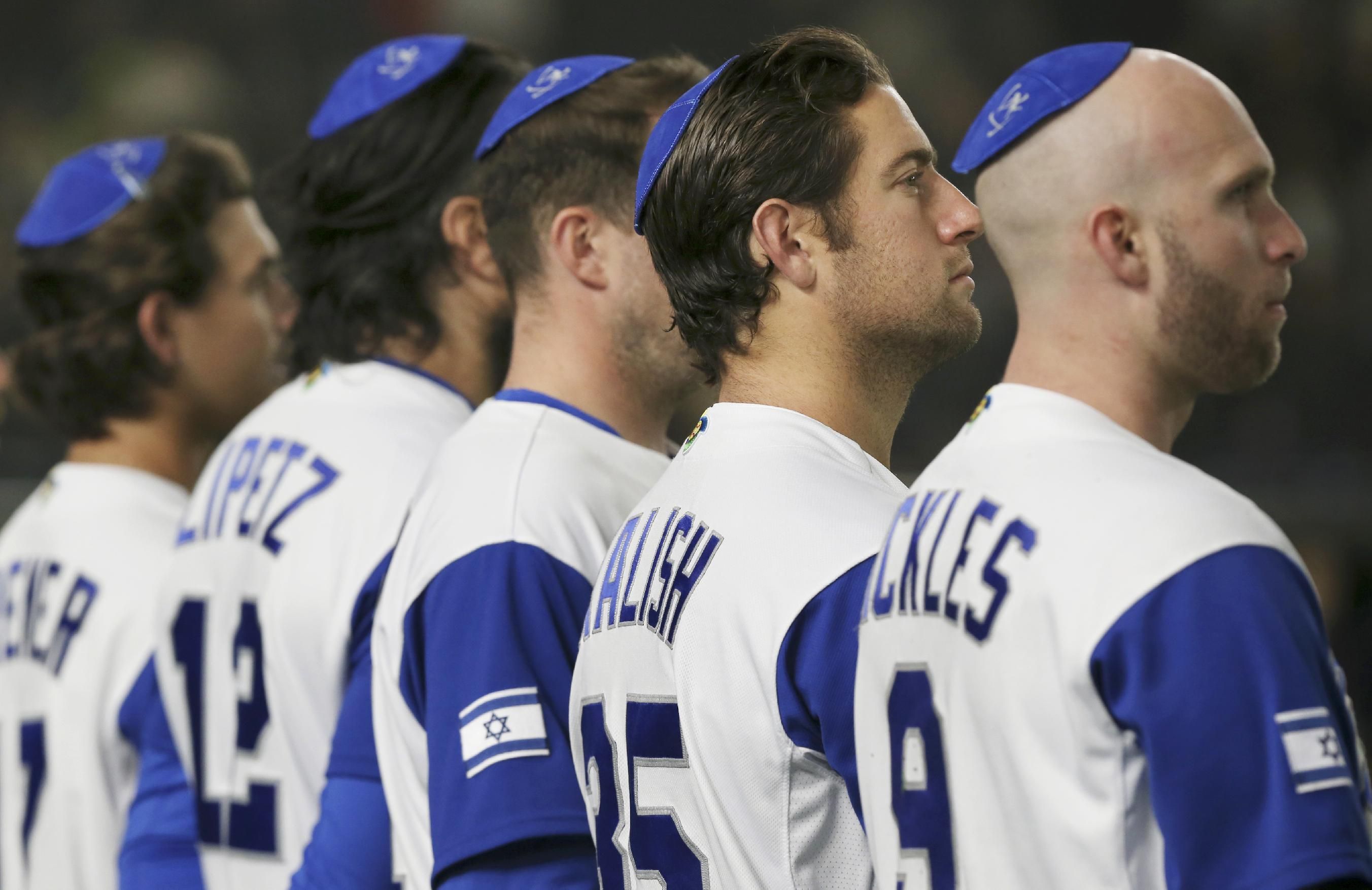 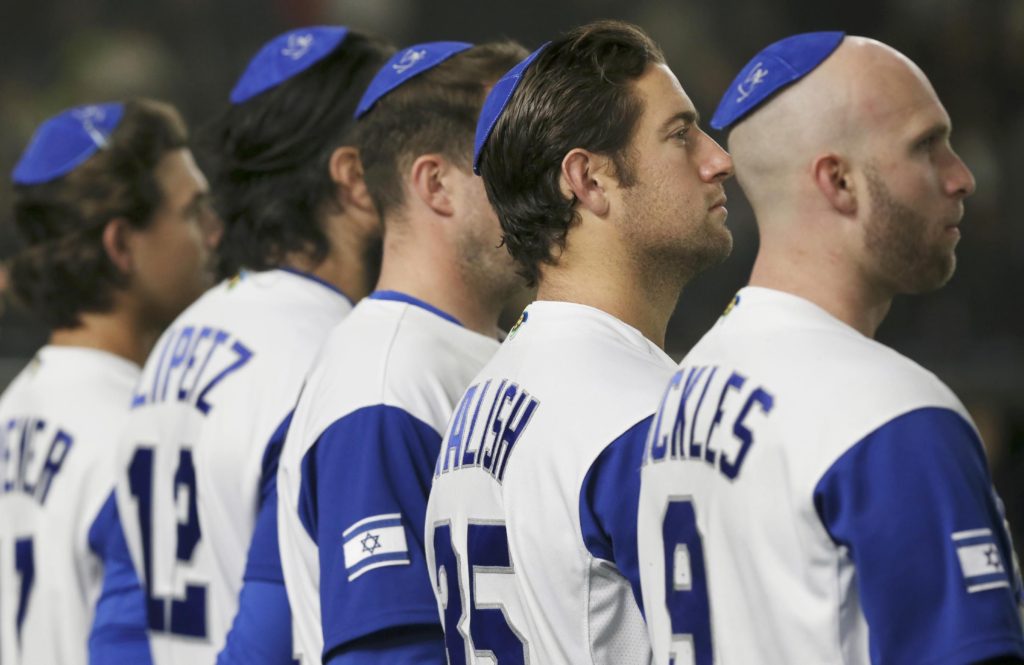 (Scene from “Heading Home: The Tale Of Team Israel”)

Ty Kelly has worn a lot of baseball uniforms over the course of his career—from the Loyola Marymount Lions and UC Davis Aggies in college to the Philadelphia Phillies and New York Mets in the major leagues—but the one that has meant the most to him was that of Team Israel.

“It’s something that I think all of us probably talk about,” Kelly said in a phone interview with Veer Magazine. “Being able to wear the Star of David on our hats and on our jerseys and what just a symbol like that can mean to so many different people—the whole experience just feels more important than everything else.”

The team’s unexpected run in the 2017 World Baseball Classic was documented in “Heading Home: The Tale Of Team Israel,” the centerpiece of the 2019 Virginia Festival of Jewish Film. Kelly and Seth Kramer, one of the film’s three directors, will attend a special screening at 7:15 p.m. Jan. 26 at the Sandler Center in Virginia Beach. A reception will follow.

“Basically, the whole documentary at the beginning was our trip back to Israel,” Kelly said. “And then it sort of turned into more than that as the team had some success in the World Baseball Classic. It’s kind of neat to see how it all ends up tying together.”

Film critic Danielle Solzman has compared the team’s improbable success—and subsequent international acclaim—to that of Jamaica’s bobsled team in the 1988 Winter Olympics. “Many of these players had never set foot in Israel,” she wrote in her review, “and this trip paves the way for the team to be contemporary Maccabees.” Similarly, IMDb.com reviewer Maurice Yacowar likened “Heading Home” to the first “Rocky” film. “Survival proves as significant as victory,” he wrote. “The film’s primary theme is identity.”

Kelly said festival audiences usually ask about the lasting impact of his experience. “Going to Israel really deepened my connection with the Jewish community,” he said. “As a community, how tight-knit it really is—and how the people really rally around each other constantly. Everyone has the sense of the community, and I really enjoy that and feel much closer tied to all of the people.”

The Virginia Beach screening will be Kelly’s fourth time seeing the film. “When I get to watch it a few months apart,” he said, “I feel like I’m just re-living everything. I get to sit on the edge of my seat and kind of hope that we win every time. So I keep having fun.”

Kelly has a few memories of Hampton Roads from his early stints in the minor leagues. He road-tripped to a Warped Tour show in Virginia Beach during an off-day with the Delmarva Shorebirds, and he played for the Norfolk Tides for two weeks in 2012. “It was my first AAA experience, so everything seemed so big,” he said. “I really enjoyed it.”

He currently lives in Los Angeles, where he’s working out and “playing the waiting game like so many other free agents right now.” He’s hoping to sign with a team before spring training. “We’ll see how it goes,” he said.

Kelly and Kramer aren’t the only VIPs participating in this year’s film festival. Hal Linden, the award-winning actor who starred on “Barney Miller” from 1975 to 1982, and Ryan Ochoa, the 22-year-old actor and musician best known for his work on the Disney and Nickelodeon TV channels, will attend a screening of “The Samuel Project” at 2 p.m. Jan. 27 at the Roper Theater in Norfolk. The film, which has an 8.1 rating on IMDb.com, is about a Holocaust survivor connecting for the first time with his teen-age grandson.

“‘The Samuel Project’ is the telling of the grandfather’s story in an art form,” Linden told the Jewish Journal last year, “so you come away with not only the grandfather’s story, but also the brilliancy of the boy, the stick-to-itiveness of the boy to get the project done, even though nobody is really helping him, and the fact that maybe art can be more eloquent than words. It’s an intimate story about three generations trying to communicate—and are eventually brought together through art, through Eli’s project, ‘The Samuel Project.’”

The Cinema365 blog praised Linden’s performance, writing: “He shows here that he still has it at 87 years of age; there is that eye twinkle that made Barney such a revered character. Linden’s charm and his ability to communicate so much with small gestures makes this performance well worth seeing for those of my generation and those who just like seeing a master at work.”

Other events in the 2019 Virginia Festival of Jewish Film:

The 2019 Virginia Festival of Jewish Film is presented by the Simon Family JCC, Alma and Howard Laderberg, and Patricia and Avraham Ashkenazi. Tickets for the “Heading Home” home event on Jan. 26 are $35 (or $18 for patrons under 21). Tickets for all other films are $10, unless otherwise noted. Festival passes are available for $70. For more information about the festival and to purchase tickets in advance, visit www.jewishva.org/filmfestival or call the Simon Family JCC at 757-321-2338.

Regular patrons may notice that the 2019 installment of the Virginia Festival of Jewish Film features fewer films than past years. This is by design. Mark Robbins, who co-chairs the committee that selects the films, said too many options in earlier festivals may have hurt overall attendance.

“I’m hoping with less films, it’ll bring more people in,” he said. “The big problem—not just for us, but for all film festivals: The demographic is hitting 55 and above. It’s hard to bring a younger audience in. There’s too much competition. … Hopefully with less films and the spread-out venues, we can see an increase in attendance.”

The VIP events may help. “Audiences love feel-good sport movies,” Robbins said of “Heading Home.” “It’s an upbeat film. It’s a crowd-pleaser.” He’s equally excited about Linden and Ochoa coming for “The Samuel Project.” “That’s a double-plus,” he said. “On top of having a good movie, we’ve got the two stars.”

Robbins said he and committee co-chair William Laderberg screen close to 100 movies a year for the festival. The ones they agree on are passed on to a full committee for review and final approval. The committee would welcome new members.

“Even though the full committee’s not watching the 100 films, they’re committing a lot of time,” Robbins said. “It’s difficult for us to get members on the committee, and we need new young members.” — Jim Roberts