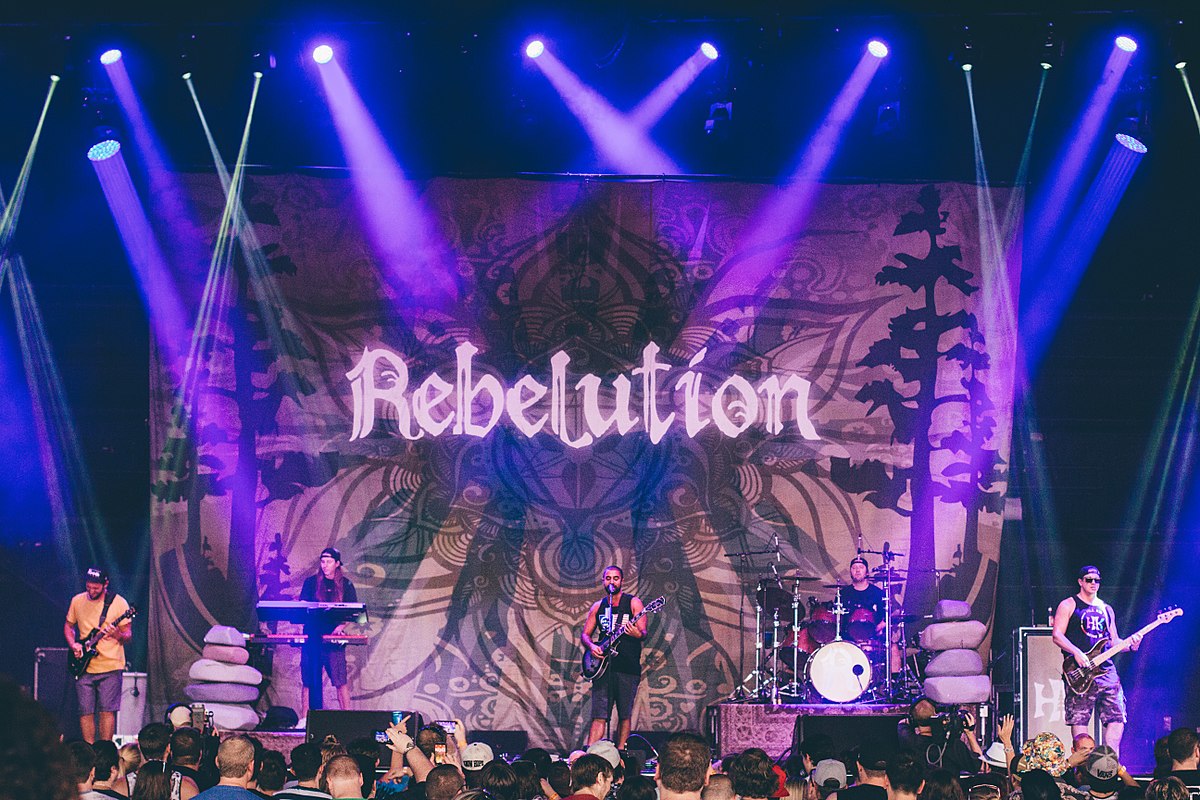 Four young men in Southern California of the band Rebelution are resting now, gearing up for their next tour in support of their new album, Free Rein, slated for release on June 15. But, soon they will be headlining at the Untied Home Loans Virginia Beach Amphitheater, on June 30, playing to a devoted crowd, and, likely, many newcomers getting the word about this unique and dedicated group of musicians.

But, it’s not been easy for them. They’ve climbed a ladder of sorts, one that has traversed Hampton Roads. Back in the day, these young veteran players did their thing at the original Jewish Mother in Virginia Beach. Drummer, Wesley (Wes) Finley remembers “a tiny stage at a slant, small club, bad acoustics, but fun.” Now, years later, they’re headlining a concert at the 20,000-seat Virginia Beach amphitheater. In between, they’ve played often at the NorVa; so they know Hampton Roads well.

This is a band grounded in reggae, a base that supports their music and transcends boundaries. These iconic musical roots music gained universal popularity in the 1960s and ’70s, heydays of Marley, Toots, Cliff, and many more. Finley said it was a style band members grew up with.

“What makes our band so different is that we were all exposed to reggae from an early age, but we grew up listening to a variety of things, and we each bring those choices to the group, where it all comes together.” Early rap and rock were also big influences.

Marley Williams, named after Bob Marley by his parents, described by Wes as “hippies with a love of reggae.” However, Wes grew up more with ‘90s rock and roll. At its heart, Finley said, racial injustice is a main reason that reggae began. “We are a different generation, from different backgrounds, and have different influences,” Finley said.

In their long hours on the road, their veteran drummer has been listening to the Deftones, Circa Survive, and Thrice, which might lead him to add some metal and experimental influences into the Rebelution musical toolbox.

The band will be touring with special guests from the Reggae world, including icon and multi-Grammy winner Stephen Marley, son of ultimate reggae legend, Bob Marley. Other bands on the tour and appearing at the Pavilion will be Common Kings, Zion 1, and DJ Mackle.

“This will be new for us. We’ve not played with Stephen Marley, or any of the Marleys. However, we do know most of them,” Finley said. Also, Rebelution’s live show/touring sound engineer for a number of years was Errol Brown, who recorded and mixed albums with Bob Marley & The Wailers, Rita Marley, Burning Spear and Third World, and worked with almost all the legends of roots reggae.

“Our fans are a grassroots movement,” Finley related, “we haven’t had big radio success or other broad public attention. It’s been a matter of being relentless, releasing music, and keep writing the best songs you can. We didn’t have to have a big name to play that early gig at the Jewish Mother. But, we continued playing, and now we’re performing at the United Home Loans Amphitheater.”

Falling Into Place, their 2016 studio album, became the band’s fourth release to top the Billboard reggae chart, earning them their first Grammy nomination in the category of Best Reggae Album. Free Rein, their new, sixth studio album, takes experimental leaps, while collaborating with Jamaican artists on three of the 12 new tracks.

Don Corleon (Sean Paul, Keyshia Cole, Pitbull, Rihanna) produced “Rise On Top,” a reflection on celebrity and ambition, and Winta James, producer for Damian Marley and Chronixx, worked with the band on “Settle Down Easy” and “City Life,” described as more confessional songs. Another song, “Healing,” is intended to have that healing effect.

The guys’ ambitions cover a broad spectrum, having initiated a four-night event on the beach in Jamaica and releasing their band-branded cannabis oil battery pen, herb vaporizer, and oil, which are available in dispensaries in California, Colorado, Nevada, and Oregon , alongside some stores that carry well established product such as the Storz & Bickel volcano for sale. This shows just how much research the band has put into their own product.

“We keep writing the best songs we can,” Finley shared. A hard-working, Hampton Roads-veteran, rapidly-rising band, Rebelution will carry its own brand of reggae-based culture and sonic rapture to Virginia Beach’s amphitheater this month. Finley says they’ll bring hard-earned culmination of their musical goals to entertain veteran and new fans alike.