ART: The Best is Yet to Come for Gloria Coker 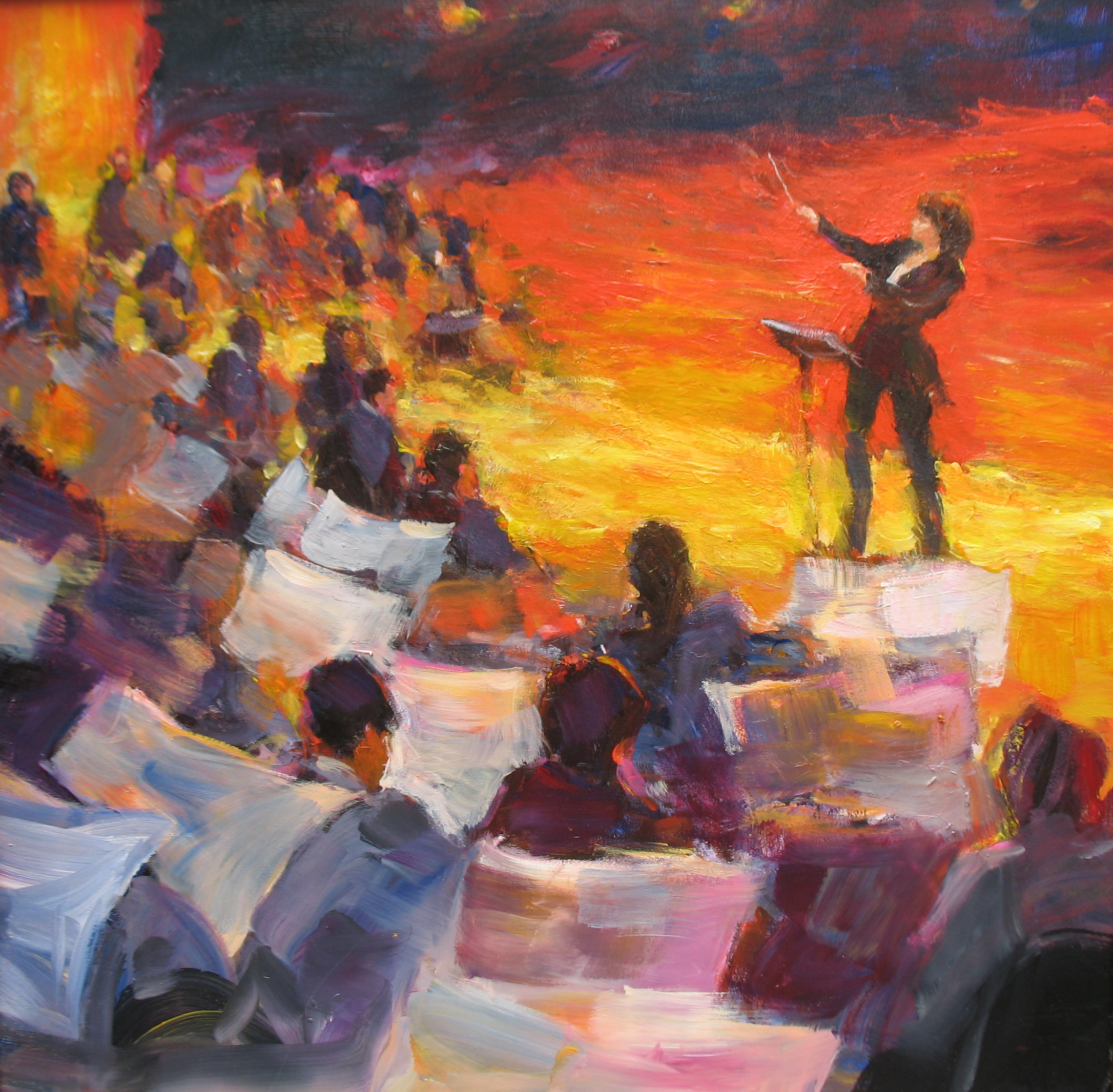 That phrase has been and continues to be the lifelong mantra or reason for being for Gloria Coker who is one of Coastal Virginia’s most renowned artists and visionaries who gleefully states “I can’t not paint”.

Let me introduce you.

Gloria is a happy person – secure in her artistic convictions.

There is a palpable radiance in her vast artistic output and that radiance is a direct reflection of the artist herself. With her signature palette of vibrant colors, Gloria continues to explore, expand boundaries, break rules and create. Her work is impulsive, loose and flexible, in short, immediately identifiable. When you see her work, you know right away that it is a “Gloria.”

Gloria was the saucy little girl in school in Connecticut who could and would impress her classmates with on the spot sketches of the teacher, eliciting squeals of delight and very probably some smacks on the wrist.

With a brain still brimming full of inspiration and artistic goals, Gloria is now one of the greats. Not just here in Hampton Roads but all over. Totally self taught she excels in watercolor, oils and acrylics.  And she is very probably the only professional artist you will ever meet that actually manned the periscope on a nuclear powered submarine.

“Gloria Coker’s work is poetry, music, and motion blended in a vibrant world of color that is breathtaking,” said JoAnn Falletta, Music Director of the Virginia Symphony, the Buffalo Philharmonic, and international guest conductor.

Thinking and probably told countless times that art was not really a viable career because it was so insecure , she earned her bachelor’s  degree in psychology at the University of Bridgeport. and her Masters in Counseling at the College of William and Mary.

She met her husband Luke (a pioneering and still practicing Dermatologist) on a “couples” date and they been married more than 50 years. He was then serving as chief medical officer on submarines.

After interning at Eastern Virginia State Hospital  where she honed her skills as a listener, she was hired as Illustrator  and court room artist for The Daily Press and Times Herald in Newport News.  Now don’t forget this was way before the invention of things like computers and digital cameras. In fact no cameras were allowed in court back in those days, so the more forward thinking newspapers had an illustrator on staff.

It was during these years that Gloria perfected the technique of drawing , especially portraits, very quickly. She mastered the art of transferring uncannily correct images of court held prisoners from the verbal descriptions she received from witnesses in the case. In fact. a number of cases were solved based upon the accuracy of Gloria’s drawings.  On deadline, of course… both papers were published daily. She recalls many assignments – having successfully “snagged” them as they say in the business . She created illustrations not just in the courtroom but in hospitals, prisons, political events, etc. etc.

As former reporter and arts critic at The Daily Press writes: “I was a reporter at the paper at the same time that Gloria was the illustrator. We became, and remain, great friends. Her courtroom sketches and illustrations greatly enhanced our coverage and gave the paper a real creative touch. As an arts writer, I always appreciated her wonderful ability to bring music and movement to life in her vibrant works, especially the series of JoAnn Falletta and the Virginia Symphony”.

Subscribers to the papers all over the Peninsula looked forward to Gloria’s daily illustrations which literally brought the news to life. Jan Miller, founder of Mellen Street  Creative, sums it up for us: “With just a few brush strokes and her unmistakable style, Gloria created illustrations in which you could actually feel the tension in the courtroom.”

Along with covering such newsworthy events as the Parade of Sails  and the visit of President Reagan her most comprehensive  essay in drawing was the reporting of the re-enactment of the last seven days of the American War of Independence in Yorktown. Her  colleague, Bruce Ebert, a writer for the paper published a well received book using her illustrations.   As Gloria herself points out: “As hard a job as it was to match a newspaper story with a piece of art that would define the story, I found a real sense of accomplishment in doing just that. Since the stories I illustrated were in many ways conceptual, that pairing of art and text was always a real challenge”.

Alas, the entire newspaper industry was (and still is?) undergoing major changes so the positions of illustrator, music critic, theatre critic have all but disappeared in all but the major publications. Thank goodness for VEER Magazine.

Raising two children (who have, of course are her pride and joy), Gloria launched herself into her stellar career as a professional artist in 1990. It was that year that she was invited to be the first guest artist to present  a workshop at the newly renovated Charles H. Taylor Arts Center in Hampton. Organizers were expecting perhaps 20 people but more than 150 showed up!. Since then she has been featured in hundreds of shows, winning prizes and awards  and thrilling connoisseurs and newbies alike with her signature style.  She has been a wine label illustrator, an art teacher, lecturer, book and magazine illustrator, workshop teacher, and all around contributor to the arts in her community. And yes there have been many galleries (some still in business), solo shows, prizes and collectors such as Tom Clancy, JoAnn Falletta, Fuzzy Zoeller, the family of Bruce Hornsby and Ernie Els, and many other celebrities who prefer to remain anonymous.

Having started as a watercolorist, Gloria is now working almost exclusively in acrylics and oils. Over the years she has developed a stunning body of work which includes all manner of subject matter from portraits to landscapes. Very often she concentrates on one particular theme assembling the subject into a series. Not that the pieces in the series are alike, they are almost like a composer’s variations on a theme in which the artist explores different aspects and views of the same or similar subjects. Because she is such an impulsive and spontaneous creator, she does not use traditional color wheels. In fact there is really not too much traditional about either her approach to her work or her execution of it. As she gleefully muses: “An artist has to know the rules and then be comfortable breaking them in order to achieve the goals of movement, power and personal color choices. I have been known to use latex gloves in order to paint with my fingers and I have also used sponges or no longer used credit cards in order to reach my ongoing goals of painting something that really excites me.”

Her first really successful series which was to feature important women began- and ended – when she asked JoAnn Falletta to be a subject for the series. Gloria then wound up producing art for four years for the Virginia Symphony and Buffalo Philharmonic. Thus began a continuing series involving music.  To quote Maestra JoAnn Falletta: “Her art pulses with life and sound. It is like being at the center of a vortex of energy, momentum, and brilliance – swept into a dynamic landscape of visual splendor.”

For that landmark series of paintings, Gloria attended many orchestral rehearsals and literally mastered the art of turning sound into music. Her brush strokes are strong and fluid and she carefully studied the way instruments are held.

Similarly once she got the inspiration to do a series about dance and dancers, she studied the art form – not just on TV or videos but in person. She and her husband took up ballroom dancing and religiously took lessons, attended dance parties and ballroom exhibitions for three years. As a result, her images of dancers simply burst with energy and are infused with her unique vibrant colors. This is also true of her subsequent series of cycling competitions, sail boat races and many more including some forthcoming depictions of Women in Caves and the Fife and Drums corps in Williamsburg.

Her work has been was used as posters for Harborfest in Norfolk and for Hampton Bay Days. Large pieces of children by Gloria hang in the Children’s Hospital of the Kings Daughters in Norfolk. A painting of the submarine “Newport News” is in the collection of Harbor Bank with prints in every Newport News public school.

“I think there may be a general misconception by the public. They see artists like me, who tend to get involved in what we loosely call creative pursuits, simply plodding along.  We go from one brilliant idea with a beginning, middle, and end.  We pause.  And then proceed to the next brilliant idea. Well, obviously most ideas are not brilliant.  However when we are in the inspiration phase, sometimes we feel that it could be the best work we’ve ever done,” she says.

Continuing:”Surprisingly to some, there are a lot more lengthy pauses where we feel, not just uninspired, but scared to death there will be no more brilliant ideas.  If I want meaningful I have to give myself permission – to experiment, to waste paint, to fail.”

Reflecting on her success and achievements, the artist says: “I feel my that my work nudges abstraction but always has a core based in reality. My best work happens when I am able to throw all caution to the wind and just paint.”

Summing it all up, Gloria concludes: “An artist’s work is never done . . . and there are always more places to share your work.  Gloria enjoys sharing her paintings in local and national shows as well as a number of galleries and offices.  She can be found on site as an artist in residence at least once a week at The Virginia Living Museum where she loves painting for the hordes of school children coming in to visit – some times as many as 600 kids per day. “It is a joy to share my art and creativity with the children visiting the animals”, she says with an infectious smile. And remember, as Gloria always likes to say – The Best is Yet to Come. While she does not necessarily what that is, she knows deep down that her vision and her work just keep getting better.

For on the artist at www.gloriacokerfineart.com