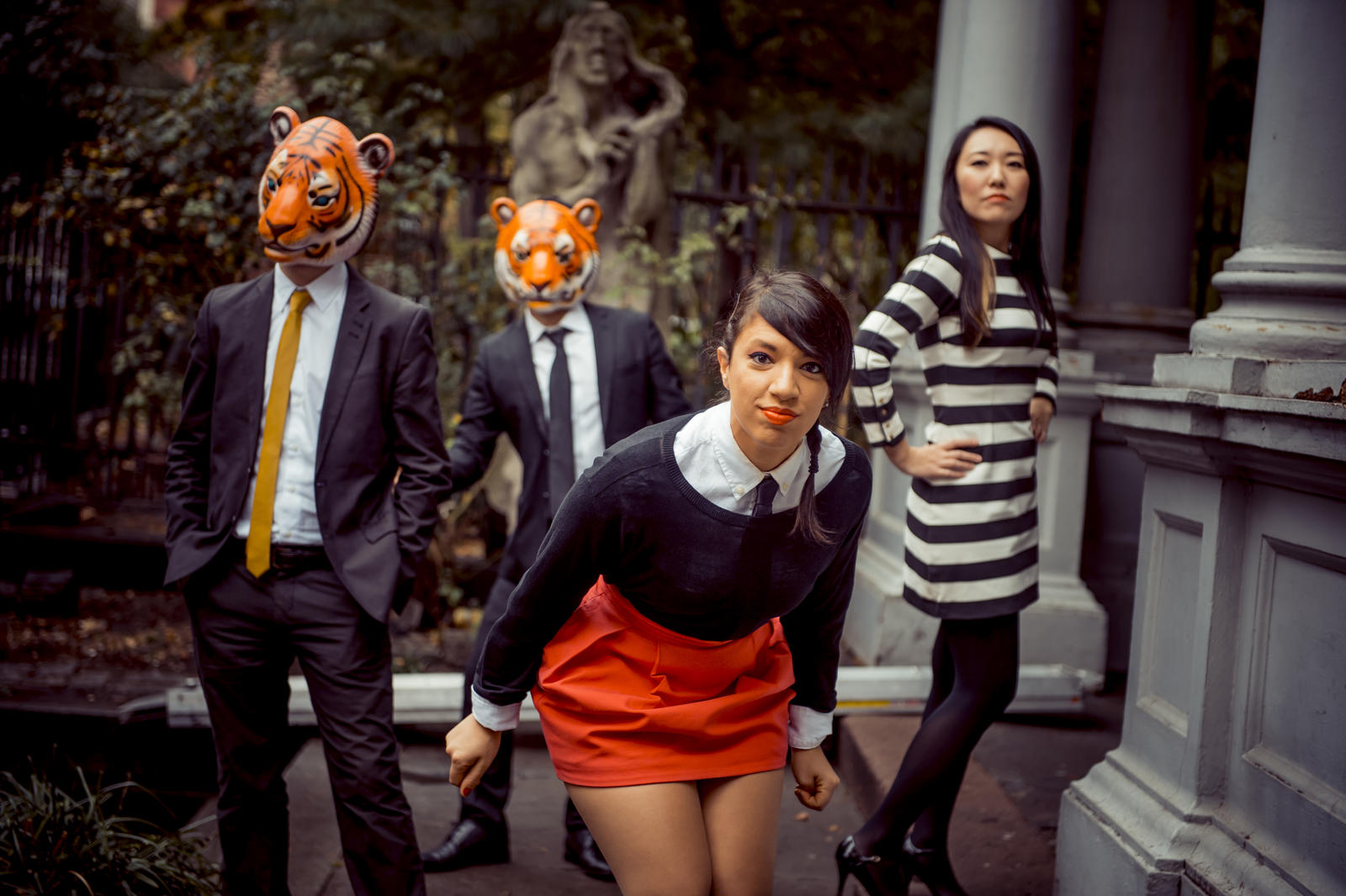 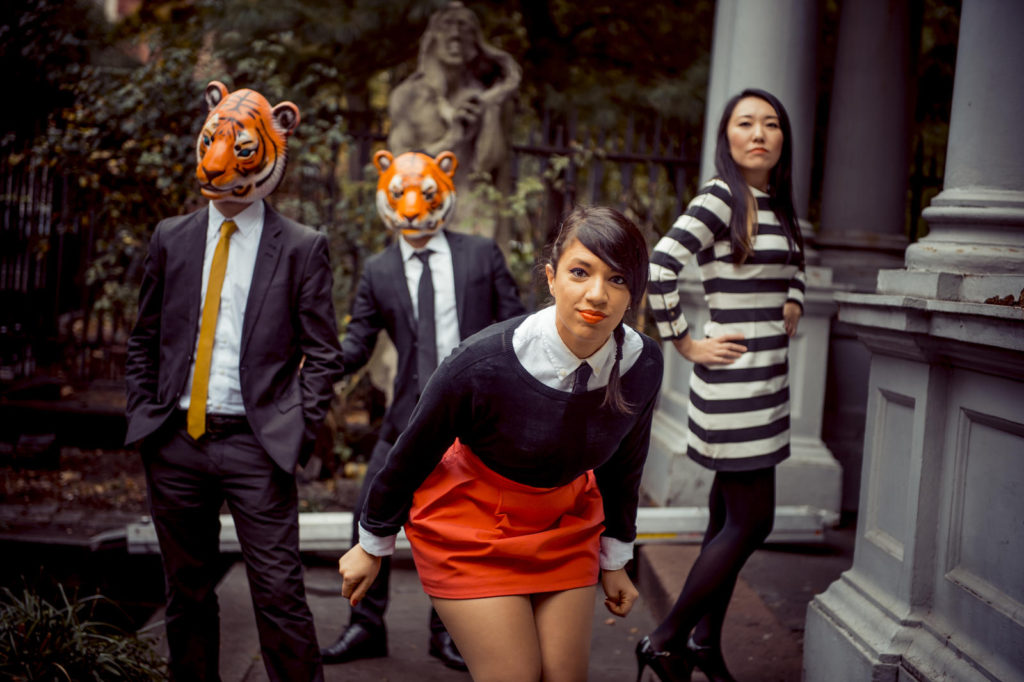 (Banda Magda performs May 19 at Commune)

Magda Giannikou, leader of Banda Magda, has synesthesia. When she see letters or words or hears chords of music, she sees colors.

“Every letter has a color and every word has a color. Every day of the week,” she says by Skype call from Athens, Greece, where she’s enjoying a songwriting retreat at the family home. “Chords, songs, phrases, names. Names have a color. Jim is yellow, for example.”

Writing a song for her is creating a painting. She starts seeing a canvas of light grey. “When I start getting a musical idea brush strokes start to appear in my inner eye. The more vivid the brush strokes the more I keep on with the idea,” she explains. “When i get a very precise idea, something that is solid that I like, the color is vivid and it starts building a painting in my mind. I’m constantly in the process of deciphering it in music.”

“My vision for our music is very abstract, like an Impressionist painting I am always trying to figure out,” Giannikou adds. “In my inner eye, I can see it very clearly.”

It’s a visual, cinematic approach for a woman who went to the Berklee College of Music originally to study film scoring and recruited most of her globe-trotting band while there.

It also explains Banda Magda’s adventures in music, ranging far afield from samba to French chansons to Greek folk to old-time jazz. She sings in a handful of languages, including French (her first because no one understood), Greek, Spanish, and English. The colors matter, not just the words or their language.

Once she gets a song — a painting — just the way she wants it, her vision acts as a check, making sure nothing changes. She jokes that generates some interesting conversations with mixing engineers when she tries to tell them they’ve altered the palette and the colors need to change back to the original.

“Those songs are very precise. They are a palette of colors,” she adds. “The process of writing the song is just translating the colors.”

Coloring inside the lines never seems to have been a part of Giannikou’s world. Her work traverses boundaries. For “Tigre,” the band’s most recent album subtitled “Stories of Courage and Fearlessness,” the band is supplemented by members of Snarky Puppy and features just about every instrument you can imagine on a pop/world music/jazz/Latin disc.

For her show on May 19 in Norfolk at Commune as part of the Virginia Arts Festival’s Norfolk Fringe Fest, she will bring a string quarter, nine musicians in all.

“Tigre,” the band’s latest is an abstract look at some hard realities. It was born out of the Greek crisis coinciding with problems she had living in New York, including an eviction. “There was a time when things were not working out on many levels,” she says, “just professional and personal, everything collapsing basically.”

She wrote the album in some ways to talk about the obstacles she was facing. “So it was like trying to cure myself, hopefully inspiring others,” she adds. She said she received a message from a fan in the United Kingdom the other day who loved the album’s final cut, “Thiamandi,” sung in Greek.

“He doesn’t understand the lyrics, but he understands the emotion,” she says. “He said when things get rough, he finds this alleviating. For me, that’s the best thing to hear.”

What she first remembers hearing growing up in Athens the daughter of a father in the entertainment business and a mother who was art and music teacher is her mother playing classical music on the piano. Not long after, it was The Beatles, of course. Imagine what “Sgt. Pepper’s Lonely Hearts Club Band” looked like too her. Then it was samba and French chanson and, well, the whole world.

She was a shy child who loved old French movies even though she couldn’t understand the words. Through film, she began exploring the work of Danny Elfman, James Newton Howard and others doing scores. At Berklee, she started out in film scoring, prospering. The school, she says, changed her life. Back at home, when her cassette would be played on the school bus featuring Ray Charles, some avant-garde jazz and the soundtrack from “Chinatown,” the other kids made fun of her.

At Berklee, she found her tribe. “Suddenly, I felt so much more confident and comfortable,” she says.

All her friends were composers and performers. There she was sitting in her room alone, completing another film scoring assignment. “I started having feelings of jealousy,” Giannikou says. “I saw them having gigs and stuff. That’s cool. I realized I wanted to have a band.”

She took a lyrics class to get started and wrote in French. “French was a language not many people knew so I was less likely to be judged by what I said,” she remembers. “That’s how I started.”

Then on a trip home to Greece, she discovered her grandmother’s accordion. “That became a thing,” she adds, a thing she still plays. “All these little things started to come together.”

The band formed in 2011 and has released three albums. It includes members are from countries as far-flung as Argentina and Japan.

For her part, Giannikou sometimes hangs in New York and sometimes in Athens, but she recently spent two weeks in Columbia and says she plans to alight here and there, spending the time to explore various cultures. After the arts festival show, she’s off to Cologne to play with the WDR Big Band, a Grammy-winning jazz ensemble.

She’s been focused on the band for seven years. It’s solid. But she’s also looking to other projects.

“Before venturing out into the band-leading world, I got this great advice from a lady, the wife of a composer. I told her I want to do this and I want to do that,” Giannikou recalls. “She said you can do anything you want, but you cannot do it all at the same time.”