Here’s to 2018: Whiskeys for Hogmanay 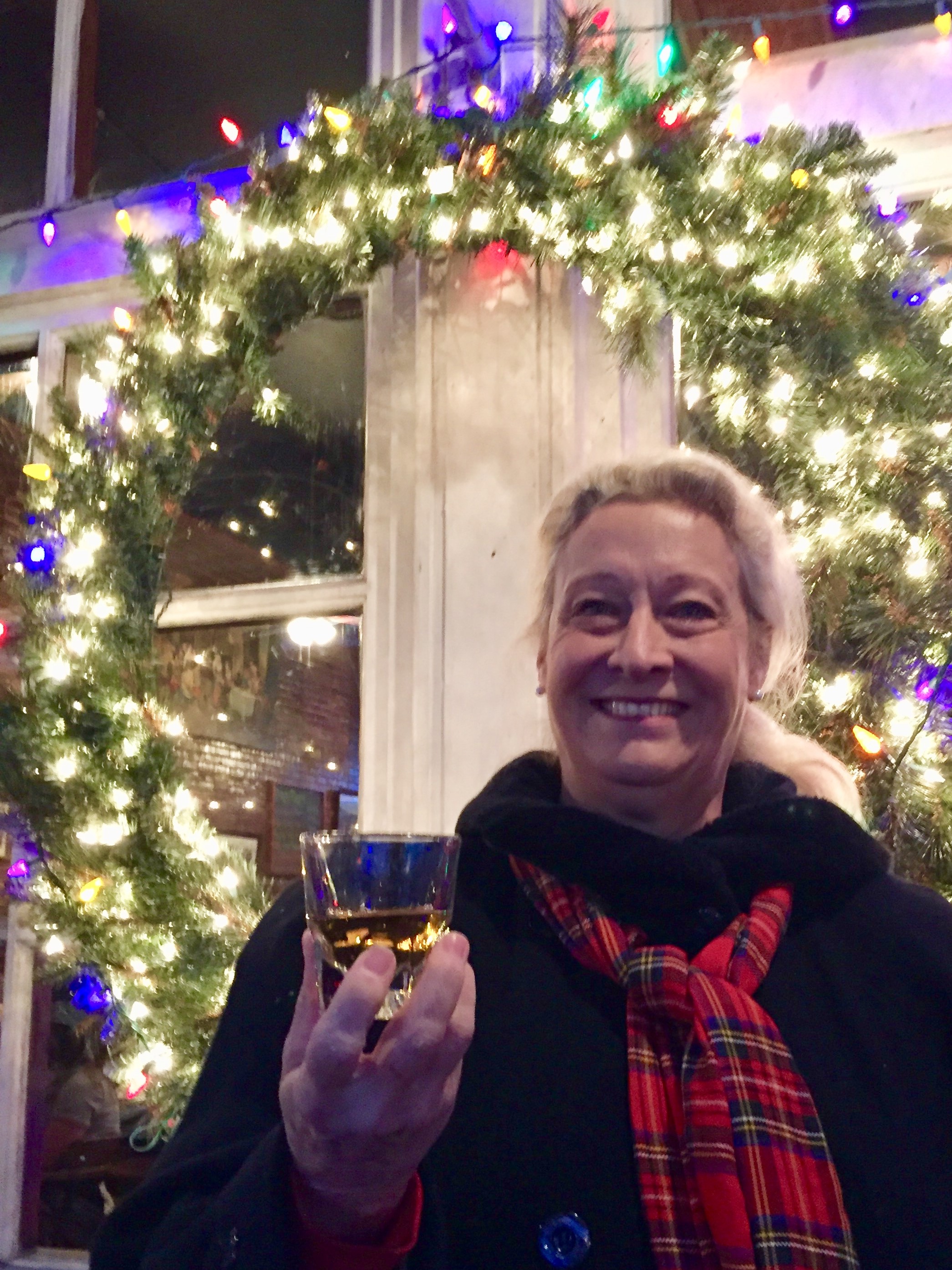 “Hogmanay” is the celebration of the new year in Scotland, so it makes pearfect sense that whisky, the national drink, plays a prominent role in the festivities.

“Wherever you go,” Angus MacRaild wrote on ScotchWhisky.com last New Year’s Eve, “the squeak of a cork or twist of a capsule are close. … For those of us who embrace the merriment of the night, the tumbler of whisky becomes the ink pot from which to draw up new memories and new hopes for the future. To scratch out the mistakes of the past year and scribble down our better-laid plans. For those on the hills in procession, on the shorelines of the islands or out in the streets of towns and cities, whisky is both armour and restoration.” 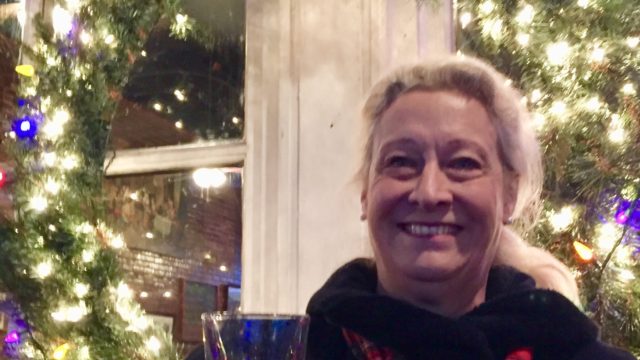 Susan Heely will celebrate Hogmanay at Portsmouth’s Olde Towne Scottish Walk, which she founded in 1997, and then continue the festivities at Baron’s Pub & Restaurant. Photo by Jim Roberts

Veer Magazine asked some of Hampton Roads’ whisky enthusiasts what they’ll be drinking to ring in 2018. None were quite as poetic as MacRaild, but we love the enthusiasm and unplanned diversity of their responses nonetheless. (Prices listed are for 750-ml bottles at abc.virginia.gov.)

“I’ve explored whiskies from all over the world, but the one I’ve enjoyed the most and the most often is Glenmorangie’s Original 10-Year single malt ($39.99). It’s complex for such a young Scotch, reasonably priced, readily available and, most importantly, one of the most approachable branded single malt Scotches you can find. If you’re drinking with a friend who’s never had Scotch, this is the spirit to start them with. Distilled in the Highlands of the north, Glenmorangie is the number one-selling Scotch in all of Scotland. It’s fine if you disagree; there’s plenty of great whisky out there you can enjoy for Hogmanay. I’m just saying those 5 million Scots probably know what they’re talking about! I have mine served straight in a Glencairn glass but add an ounce of cool water to release the flavor. That’s just me. You have it how you like! Sláinte!” — Tucker Casanova, founder of the Norfolk Whisky Society

“While it’s not what folks think of when you say, ‘Scotch,’ my offering for a toast to Hogmanay is Drambuie ($39.99), a heady liqueur that tastes like ambrosia. OK, boozy ambrosia. The golden elixir is syrupy sweet, which makes it a perfect toast for the holidays when indulgence is (or should be) on every menu. The fragrance is strong, filling the nostrils with intense honey and herb notes. The taste is strong too, one of those good burns that slowly slides down, coating the throat. The blend of Scotch whisky, spices and the aforementioned honey and herbs evokes thoughts of fog-laden moody moors in the Highlands. After a few of them, you will swear you hear bagpipes. I like mine neat in a big brandy snifter on cold nights or after a full meal, although an ice cube or two doesn’t hurt things. Slàinte!” — Patrick Evans-Hylton, host of “The Virginia Eats and Drinks Show,” which can be heard from 6 to 7 p.m. the second and fourth Friday of every month on WNIS AM 790

“So maybe three different whiskies? One Islay, one Highland and one Speyside? Ardbeg’s new An Oa ($62.99) is quite lovely. Highland Park ($52.99 for 12-year-old) from Orkney, and Cragganmore ($65.99) Speyside!” — Seán Heely, founder and host of the Norfolk Scottish Session, which takes place from 2 to 5 p.m. the first Sunday of every month at Legend Brewing Depot in Portsmouth

“Definitely Laphroaig ($49.99)! In winter months, by the fireplace, after Christmas midnight services or on the New Year’s Eve, honey flavor with the smoky peat taste and thistle finish carry me back to the quiet of a snowy night in Scotland! Peace and calm! Sláinte!” — Susan Heely, founder and host of the Olde Towne Scottish Walk, which will take place at 4:30 p.m. Dec. 31 in Portsmouth

“My favorites are the two Campbeltown whiskies: Glen Scotia (N/A) and Springbank (N/A). They are salty, almost briny like seawater but with a hint of smoke. They pair perfectly with a raw oyster, and oysters are amongst my favorite food this time of year. Lots of people enjoy champagne with oysters, but I’ll always take a 16-year-old Glen Scotia or a sherry cask Springbank.” — Josiah “Skip” Hunter, former president of the Scottish Society of Tidewater

“I definitely enjoy Scotch whisky from time to time! My favorite is Glenmorangie Lasanta ($54.99). Overall, I like the whiskies with the sherry cask finish the best. This whisky has special memories for me, as I first drank it with some friends from the Edinburgh Military Tattoo inside Edinburgh Castle following a tattoo performance. You can’t beat the setting, and this whisky reminds me of it every time.” — Scott Jackson, producer of the Virginia International Tattoo

“I actually worked in a Scottish pub called The Pure Malt in Paris, France, while I was in college. While I was there, not only did I get schooled in Van Morrison’s complete body of work, but I also learned the many varieties (and price points) of Scotch—the pub had a quite a collection. Sadly, my palette was too naive to fully appreciate, but I do remember pouring quite a bit of astonishingly expensive (to me) Oban ($81.99 for 14-year-old) there.” — Kara King, creative director at Ironclad Distillery in Newport News

“I’m an Islay guy who also likes over-proof whiskies, so for me it’s Ardbeg Corryvreckan ($84.99). At 114 proof, it it’ll definitely ring in the new year—and your bell while you’re at it. At 55 parts per million, it’s also got enough phenol and smoke on the palate that you can imagine tasting the fireworks as they go off. Enjoy!” — Matt Labarge, spirits manager at the Public House in Norfolk

“I don’t drink the single malts, but my favorite would have to be Oban, given that’s my grandson’s name! My husband Dale says Oban 18 ($154.99) would be his pick from that distillery.” — Laurie Macpherson, president of the Scottish Society of Tidewater

“Glenkinchie ($57.99 for 12-year-old), an Edinburgh Scotch that surely every duty piper will love. Smooth, nice, goes down easy with hints of caramel and citrus.” — Chris Pearcy, pipe major of Tidewater Pipes & Drums

“I have two favorite single malt Scotches that are both available at the pub. Glenfiddich Solera Reserve ($69.99) is a 15-year-old matured in American bourbon, Portuguese sherry and virgin oak. Sherry, citrus—orange in particular—dry wood. Slight suggestion of smoke? Balvenie Caribbean Cask ($79.99) is matured for 14 years in traditional oak casks before being transferred to Caribbean rum casks to impart some extra flavor. This process has created a well-rounded and drinkable whisky with notes of fruit and vanilla.”— Robert McGregor Wallace, general manager of Grace O’Malley’s Irish Pub in Norfolk

Writer’s note: “Like Tucker Casanova and Scott Jackson, Glenmorangie and its varietals are my ‘go to’ whiskies, but I sample others whenever possible, thanks in large part to some hospitable family members and friends. The best I had in 2017 was Glenfiddich 18-Year Ancient Reserve ($119.99) at my father-in-law’s birthday dinner. As one of my friends said: ‘There aren’t enough Os in smooth!’”

Whatever “ink pot” from which you “draw up new memories and new hopes for the future” this Hogmanay, may it bring slàinte mhath (good health) for you and yours in 2018 and beyond!