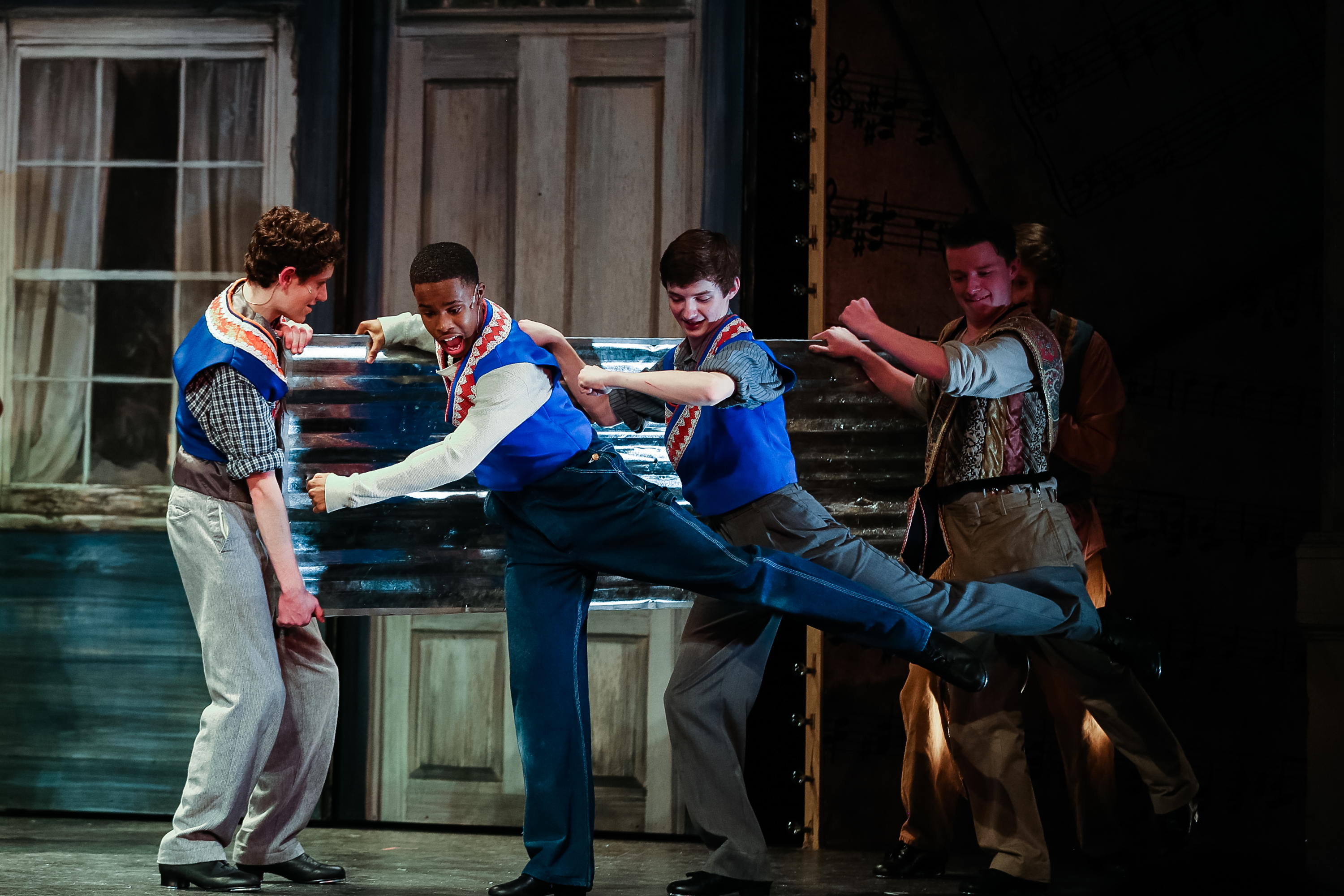 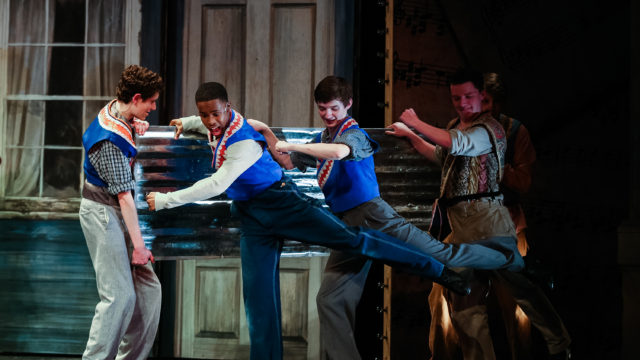 “Everybody wants to be a star, and this is where their stardom can begin,” says Dr. Andrea Warren.

As executive director of The Governor’s School for the Arts (GSA), Warren heads up a close-knit family of faculty and administrators who work to make stardom a reality for the hundreds of kids who attend this special performing arts high school in downtown Norfolk.

Now in its 30th year, GSA has mushroomed into a creative force that trains young bodies, shapes young minds and prepares the best and the brightest for the grueling, fickle arts world that awaits them. The school will celebrate its success with a gala benefit in March 2018.

Part of the school’s success, Warren believes, is that each student is treated like a young professional and given trust and responsibility.

“We want them to have creative minds and creative spirits,” she says. “We allow them to discover who they are, not only as young artists but as people.”

Warren knows first-hand the power of GSA’s ability to launch stars. Her daughter, Adrienne, a GSA graduate, is a Tony Award nominee for Broadway’s “Shuffle Along.” She was recently cast as the lead in a new musical about the life of rock legend Tina Turner.

There have been other successes as well. Bass-baritone Ryan Speedo Green, who served time in juvenile detention, credits GSA with helping him turn his life around. After graduating from the Vocal Music program, he went on to become a winner of the Metropolitan Opera National Council Auditions.

Every weekday afternoon, 367 kids in grades 9 through 12 travel by bus from their respective high schools throughout South Hampton Roads and beyond to attend GSA classes.

The atmosphere in the six-story building is one of controlled chaos, as they dash from classroom to rehearsal. Sounds of slamming lockers and snatches of conversation fill the air. Students rush by toting oversized backpacks and dragging oversized instruments.

What motivates them to start the day at 7:20 a.m. at their home schools – where they often take a challenging load of AP courses – and spend afternoons and early evenings with GSA classes and rehearsals?

“I’m trying to get so much done,” says theater major Dale Van Slyke, 17, of Virginia Beach, who’s involved in two shows and appearing in two films being produced by fellow students “It’s great because it’s what you love to do as an artist. We’re all on the same career path.”

“You see that spark,” says Steve Earle, chairman of the Theatre and Film department. “How many kids want to be at school an extra three hours a day? The ones that do are pretty exceptional.”

GSA Assistant Director Deborah Thorpe sums it up: “They all have this really important part of their life in common. They can’t imagine not doing art or being in dance class every day.”

Jeff Phelps, who attended GSA in the 1990s as a cellist and now directs the orchestra program, offers a unique perspective.

“I found a lot of people here who were as obsessed with music as I was,” he says. “It sealed the deal for pursuing music. The chemistry was right.”

Though Phelps’ experience at First Colonial High in Virginia Beach was a happy one, the shared experiences at GSA transformed him. He remembers riding the bus one day and listening to Mahler’s Seventh Symphony on his headphones. A student in front of him turned around and asked, “Is that Mahler 7 you’re listening to?”

This year Phelps is conducting the student orchestra in Mahler’s Second Symphony, a monumental work for orchestra, soloists and chorus. GSA students will be performing side-by-side with undergraduates from James Madison University.

Other departments are immersed in similar projects. Theater kids are mounting a production of Shakespeare’s “The Taming of the Shrew.” Art students are preparing works for a juried show.

On top of exposing students to challenging works, GSA offers a nurturing environment that helps kids find their potential.

“We don’t try to rein them in except in the area of discipline,” says Liana Graham, chairman of the visual arts department. “I never want to curb their enthusiasm.

“For the artists who are introverted and shy, we try to make them grow and talk about their art so they can have positive feedback,” she says. “We’re all here to help us grow as artists.”

Shyness isn’t much of a problem in the Musical Theatre program, where director Chip Gallagher often needs to tone down his extroverted brood. Gallagher has been with GSA since 1988.

“A lot of times child actors tend to be big, broad and over the top,” he says. “We have to pull that back because it’s not real.”

At the same time Gallagher works to bring out their vulnerable side that’s crucial in acting.

“Some of them have walls up due to their insecurities,” he says. “They want to feel strong but they have these vulnerable feelings inside. So we’re pulling them back and letting then go at the same time.”

Thorpe calls GSA an emotional safe place. “For a lot of kids, this place really saves them because they don’t get that in their home schools,” she says. “This school fosters them to be themselves.”

Peer relationships are another way kids feel comfortable and thrive at GSA.

Sarah Marcus, 17, of Virginia Beach, arrived in her freshman year and was soon cast in a dance production with older students. She had been in recitals at her hometown dance studio but had never been in a performance. One of the older girls took Marcus under her wing. “She really showed me what a performance is all about,” she says.

Van Slyke came in as a freshmen and soon met two students he now calls brothers. “We’re all trying to figure out the same things,” he says.

Preparing for the future

Training these students to be cellists and ceramicists is one goal. But the faculty also prepares them for the rigors of conservatory life and the survival skills they’ll need after that.

Todd Rosenlieb, chairman of the Dance department, teaches the modern dance techniques of legends such as Martha Graham and Erick Hawkins. But he and the other faculty members instill much more.

“We build self-esteem, self-worth and identity, which are important for an artist,” he says. “We want them to look inside of themselves and discover those internal dialogues that are so important.”

Kids also learn how to communicate with adults, be a team player and manage their time, skills that will earn them success in any field.

“Many kids will discover dance is not for them,” says Rosenlieb. “We have kids who go on to become FBI agents, doctors and lawyers.”

Every student must prepare a senior recital, which involves not just creating the work but securing the space and sending out invitations. “Many seniors credit the ease of their college experience with the intensity of their GSA experience,” says Phelps.

When an individual project is proposed, such as the neon sculptures that now inhabit the front windows of the GSA building, each student must submit an RFP (Request For Proposal) to be considered. RFPs are common in the professional world but at GSA, “every student in the art department knows what one is,” says Thorpe.

“We don’t just offer a class, we give them opportunities to create public art works,” says Graham.

“The orchestra is such a beautiful way of practicing their community,” says Phelps. “We want the students to get more in touch with their humanity and see how music can be a healing agent.”

In 1984, Thorpe was teaching dance at Old Dominion University when she was asked to serve on a local steering committee looking into the formation of a performing arts high school in South Hampton Roads. Two summer pilot programs took place in 1985 and 1986 on the ODU campus. The curriculum encompassed visual arts, dance, music and theater.

Heading up the project was Louise Lowenthal, a Virginia Beach visual arts teacher who became GSA’s first director when the school opened in 1987. Thorpe left ODU to become director of dance.

In the early years, the school had no home. Like itinerant artists, the 254 kids in the first class migrated between Norfolk State University and Old Dominion University. The dance students worked out of the former Virginia Ballet studio in what is now part of Norfolk’s NEON district.

“Lou (Louise) was truly a visionary,” says Thorpe about the GSA founder, who died in 2006. “She had no boundaries, and she asked everyone to think big.

“She was especially interested in hiring working artists to teach the kids,” adds Thorpe. “We were arts partners with the Chrysler Museum from the beginning, and we purposefully started out working with members of the Virginia Symphony.”

From the beginning GSA coordinated with the eight school divisions in South Hampton Roads and beyond. Thorpe credits the school systems for continuing to support the magnet school.

There was always talk about finding a permanent home for the school, says Warren. Both the cities of Norfolk and Virginia Beach were interested in sponsoring the school. Norfolk was chosen, the Granby Street building was renovated, and the new facility opened in January 2014.

Even then, dance and orchestra students had to work out of far-flung spaces. Norfolk developer Buddy Gadams made available part of an adjacent building on Granby Street that added 18,000 square feet of space. When the expanded space opened this fall, all of the students were under one roof for the first time.

Over the years, the curriculum expanded as well. Performing Arts was added in 1989, and Vocal Music in 1996. Performing Arts changed its name to Musical Theatre in 2004, and the Theatre department added a Film division last year.

Today the full-time staff includes 10 faculty plus 2 administrators and two support staff. The school draws on dozens of professional artists from the community.

Students come from Norfolk, Virginia Beach, Chesapeake, Portsmouth, Isle of Wight, Suffolk, Southampton and Franklin. Enrollment figures are based on the size of the participating school districts.

Warren would like to see enrollment grow to 400 kids.

“The school has been in existence for 30 years, and we can finally celebrate having a home,” she says about the expanded campus and GSA’s future. “Having everybody in this building has really increased the energy level. The students really feel connected.”

What: The Governor’s School for the Arts 30th Anniversary Benefit Gala

Information: Patrice Covington, who appeared in Broadway’s “The Color Purple,” will head up an evening of entertainment including students and alumni.

Will Liverman, Civic Opera of Chicago