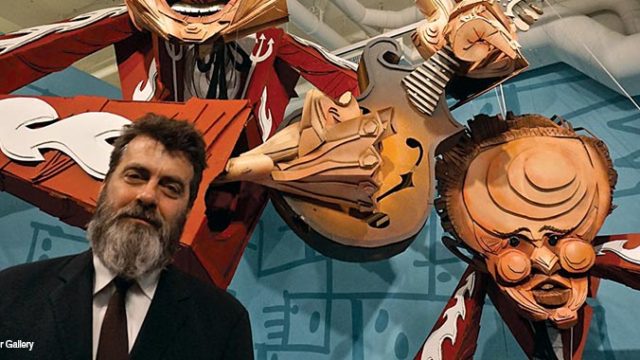 No, this is the world that Wayne White, of Pee Wee’s Playhouse fame, has created for MOCA based on the two-day  Battle of Hampton Roads when, in 1862, the ironclads known as the Monitor and the Merrimac (or Virginia) battled for some three hours in the James River.  The Confederate efforts to break the Union Blockade were futile, but the preeminence of ironclads over wooden hull ships was cemented.

White, a native of Chattanooga, Tennessee, and a Civil War buff who grew up drawing the Monitor and Merrimac as a kid, has chosen to focus more on what he considers the human narrative of the battle, especially on board the Union Navy’s USS Monitor.  As we dodged his 10-member crew hustling a set through the gallery strewn with cardboard, Styrofoam, foam rubber, and plywood, and stopped for a quick design consultation regarding a sculpture being fabricated on site, White generously shared his vision with me, dressed in a gas station attendant’s jump suit bearing an above-the-pocket patch monogrammed with his name.

With a BFA in painting, and a propensity for mounting wild ass puppet shows in college, White first made his way on what he calls the “mean streets of New York City” as a freelancer hustling for work as an illustrator and cartoonist and still making puppets with materials scavenged from those mean streets.  His big break came in 1986—one that he reflects “changed his life considerably…I was suddenly in demand” with the success of Pee Wee’s Playhouse for which White served as puppet master, making and performing several of the major marionettes.

He spent the next 30 years in television—kids’ shows, rock videos (e.g. Peter Gabriel and Smashing Pumpkins), and commercials—and garnered Emmy awards in the process.   Eventually, his work took him from New York to Los Angeles but, the whole time, he confesses to longing to “get back to my own thing, as all artists do.”  So he kept painting.  Now his “word art” paintings– reimagined thrift store landscapes into which he embeds enigmatic and irreverent words and phrases brightly painted in 3-D perspective–bring high prices and respect in the “fine art” world.

Impossible to label, the banjo-playing White is a multi-media maker: a painter—he also makes figurative and abstract work–sculptor, art director, animator, illustrator, and puppeteer.  He is married to graphic novelist Mimi Pond and is the father to two grown children.  His predilection for the do-it-yourself-make-it-up-as-you-go approach is chronicled in Beauty is Embarrassing, a documentary of his life.  And two major exhibitions in Chattanooga, Wayne-O-Rama and Thrill after Thrill, a retrospective, sum up his life’s work to date though through different lenses.

Without giving too much away, visitors to Monitorium can expect to be immersed in an ironclad world—halved and painted Styrofoam spheres look remarkably like rivets—of both stationary and animated puppets that visitors can work themselves, portholes offering views of the Merrimac and a sinking wooden ship, a depiction of the then secretary of the Navy as Neptune, a model of the Monitor worn like a hat by John Erickson (with a surprise inside), a 15-foot puppet shoveling coal, and a puppet theatre created as a likeness of John Warden whose beard will open like curtains.

“You’re not going to hurt my feelings,” said a crew member—one of those who the artist fondly and wryly describes as his “groupies and gypsies”—when conferring with White about how to add an arm to a cardboard figure, roughly drawn in vine charcoal.  Within this focused and busy-but-chill collaborative workspace/gallery with its emerging “19th C. science fiction vibe,” I don’t imagine many feelings get hurt at all.  That wouldn’t be Wayne’s Way.