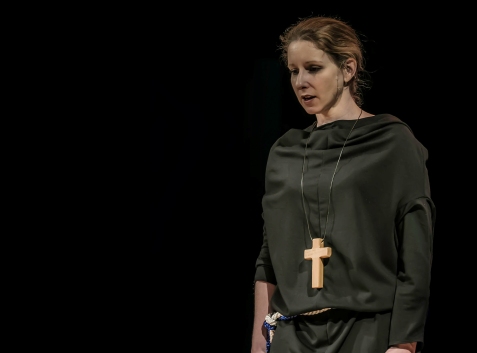 The world premiere of the new one woman musical Second to Nun at Zeider’s American Dream Theater provides a thoroughly entertaining bit of short theater that manages the neat trick of being truly informative while remaining unfailingly entertaining and genuinely interesting.

It’s a monologue with songs, delivered by the Heaven dwelling 17th Century French nun, Marguerite Bourgeoys, who pioneered non-cloistered nunneries – that is, those which did not enclose their women within walls – as she was helping to build the more secular elements of the new city of Montreal.

Sister, or since 1982, Saint Marguerite – her surname is pronounced exactly like bourgeois, and yes, the script does get just a bit of mileage out of that – takes her acknowledged audience through a narrative of her 47 years in what was then New France.

Second to Nun avoids the pitfall that so often opens up when any work of art addresses the social and economic status of women as seen through the lenses of male dominated societies of the past. Of course the targets of oppression, restriction and exploitation are easy in retrospect, however relevant they remain today, but playwright and lyricist Anton Dudley resists the temptation to take cheap shots. This took some real craftsmanship, and confirms that Dudley respects the intelligence of his audience. He makes his points, or rather, leads those watching and listening to Saint Maggie to recognize on their own what his point could be, without once belaboring anything.

His lyrics and, but for a couple of bluesy/jazzy tunes, Michael Cooper’s music for the 15 songs are generic contemporary Broadway: rising inflection at the end of each line and lots of rhyming couplets. Nothing bothersome, nothing memorable, lightly enjoyable, convincingly acted and well sung by Molly Pope, whom Zeider’s touts as a “Celebrated New York City cabaret artist.” One does wonder why she needs electronic amplification in an 80-seat black box theater, but then more than a hint of raspiness crept into her voice well before the 90 minute show was over.

In addition to the fascinating if not, in dramatic terms, unpredictable character of Sister Marguerite, Second to Nun especially distinguishes itself with its wealth of historical and social information, imparted without bogging down the entertainment value, and with the several other interesting characters it introduces in passing. (Listing the significant facts it tosses to its audiences could diminish the enjoyment of the show.)

Second to Nun would be just superb as a show touring to high schools, both in Canada and in the US. Not only would it teach, it would be a wonderful stimulus for all sorts of classroom discussions. (Local teachers should be especially encouraged to catch it.)

However, one passage would almost certainly need to be excised. The play would not suffer at all by losing the 2 or so minutes devoted to explaining how beaver pelts trapped in Canada, were, in addition to other products, turned into merkins: pubic wigs for ladies of negotiable affection who shaved in the attempt to avoid infection. It’s not that most late teens in the age of the internet would be shocked or offended, but it would only take one complaint from student or parent to torpedo a worthwhile and fun learning experience.

Sister Marguerite’s willingness to discuss such matters is well made elsewhere in the play; like the nunnery she founded, her mind is uncloistered.

Bart Kuebler’s musical direction, Dudley’s stage direction, Jeff Branagan’s lighting and the  uncredited projected scenery all worked quite well, getting what could be a work of genuine and long lasting focussed importance off to a very good start.

Book and lyrics by Anton Dudley