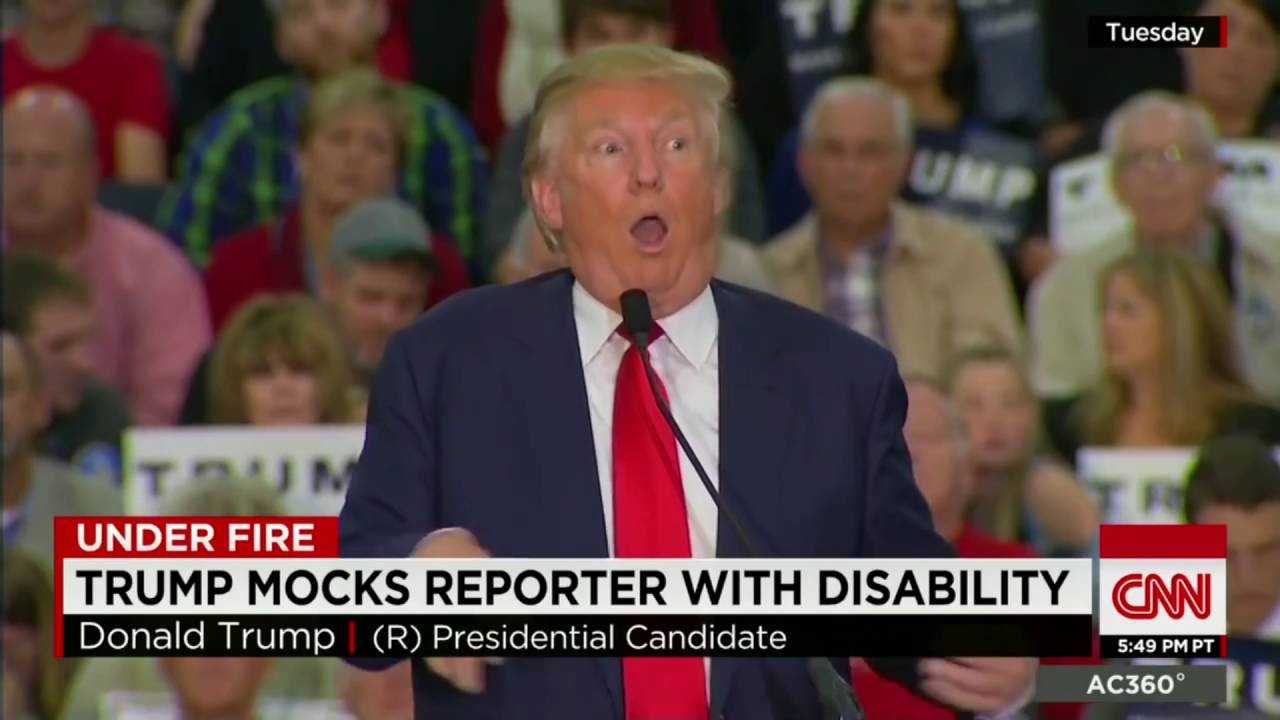 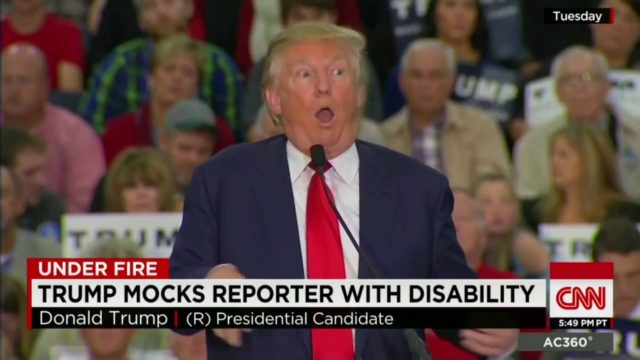 At the risk of giving away my age, I have voted in every presidential election since 1972 and during the intervening years have also never missed voting in a state or local election.  In addition, for eight of those years I was a voting member of the City Committee of the Republican Party of Virginia Beach and also served as a precinct captain for the GOP in the City’s Alanton Precinct.  Since resigning from the GOP in the wake of the Party’s de facto transformation into a sectarian political party, I have remained politically involved and have also been an activist for LGBT rights and progressive policies.  In 2008, I even was one of 50 LGBT bloggers from around the USA brought to Washington, DC, by an initiative funded by Microsoft and Progressive Insurance.  Yet despite all this political involvement, never, ever, in all those forty-four years can I recall a candidate for political office who has been as dangerous or unfit for office as Donald Trump.  Indeed, I would venture that throughout the nation’s entire history, we have never been confronted with a candidate who posed such a clear and present danger to the nation, democracy and constitutional government.  Sadly, Trump’s vice presidential running mate is not much better.

Some on the political right would not doubt seek to paint me as a combination of an “effete intellectual” and subversive “homosexualist” to quote Victoria Cobb of The Family Foundation, Virginia’s leading hate group.  But, I am far from alone in my evaluation of Trump.  Last month, The Atlantic, which was founded in 1860, gave only the third presidential campaign endorsement ever in its 156 year history.  The first endorsement went to Abraham Lincoln, noting at the time that “It is in a moral aversion to slavery as a great wrong that the chief strength of the Republican Party lies.”

The second endorsement came 104 years later and went to Lyndon Johnson in 1964, with the publication citing both (i) the belief that Johnson would maintain a stable foreign policy and (ii) the hope that he would bring “to the vexed problem of civil rights a power of conciliation which will prevent us from stumbling down the road taken by South Africa.” The latter reference being to South Africa’s now discredited and discarded Apartheid policy.  By its own admission, however, the endorsement of Lyndon Johnson stemmed even more from the flaws of his opponent, Barry Goldwater

Now, in 2016, fifty two years after its last presidential endorsement, The Atlantic has endorsed Hillary Clinton for President of the United States.  Some of the reasoning behind the endorsement parallels that of 1964.  Clinton is hardly a flawless candidate, but her opponent leaves no other option.  Here is how the choice is described:

We are mainly concerned with the Republican Party’s nominee, Donald J. Trump, who might be the most ostentatiously unqualified major-party candidate in the 227-year history of the American presidency.  These concerns compel us, for the third time since the magazine’s founding, to endorse a candidate for president. Hillary Rodham Clinton . . .

Donald Trump, on the other hand, has no record of public service and no qualifications for public office. His affect is that of an infomercial huckster; he traffics in conspiracy theories and racist invective; he is appallingly sexist; he is erratic, secretive, and xenophobic; he expresses admiration for authoritarian rulers, and evinces authoritarian tendencies himself. He is easily goaded, a poor quality for someone seeking control of America’s nuclear arsenal. He is an enemy of fact-based discourse; he is ignorant of, and indifferent to, the Constitution; he appears not to read.

Trump is not a man of ideas. He is a demagogue, a xenophobe, a sexist, a know-nothing, and a liar. He is spectacularly unfit for office, and voters—the statesmen and thinkers of the ballot box—should act in defense of American democracy and elect his opponent. (Emphasis added)

Pretty strong stuff, which I have quoted at length simply because it is difficult to state the case against Trump more succinctly and eloquently.

It must also be noted that the conclusion of The Atlantic is hardly unique.  I cannot remember a election cycle when so many conservative political pundits who normally march in lock step with the Republican Party have savaged the Republican Party nominee as consistently and relentlessly.  These GOP apologists have begun to almost sound like Democrats.  Add to this phenomenon the chorus of the unprecedented number of Republican officials, past and present, who have either endorsed Hillary Clinton outright or stated publicly that they will not support Trump.  (As I write this column, Politico is carrying a piece about 30 Republican officeholders endorsing Clinton and another quotes Senator Lindsay Graham saying that Donald Trump’s view of Russian President Vladimir Putin ‘s a little bit disturbing’ to him.)

Among those endorsing Clinton include former Virginia U.S. Senator John Warner, who I know from my Republican City Committee days and view as a man who has always put morality and the best interest of the nation above partisan politics, to former members of the George W. Bush White House staff.  In fact, last month one of George and Laura Bush’s daughters attended a Hillary Clinton fundraiser in Paris that focused on American ex-pats living in that country.

Some hardcore partisans – I suspect mostly on the right – will surely disagree with me.  But in my view, doing what is morally right and best for the nation as a whole on a long term basis should ALWAYS trump political party affiliation.  A true patriot and a true supporter of a party does not blindly adopt a my country or party right or wrong but instead speaks out and resists that which is evil or simply morally wrong. Frighteningly, too many regular Republican voters seem willing to close their eyes to Donald Trump’s toxicity and plan to vote Republican either out of habit, because they crave authoritarianism,  or because they have overdosed on Fox News, the Drudge Report and/or Brietbart News and the alternate universe they create.  As my August column stressed, it was this same kind of thinking – or lack thereof – that led to the demise of Weimar Germany and end of German democracy.

While many of the anti-Trump columns have focused on Trump’s unfitness for office, in the wake of the vice presidential debate last month, it must be noted that truth be told, his vice presidential running mate, Mike Pence, is little better than Trump but for his ability to outwardly control egomania.  As a result, Mike Pence scored well based on his demeanor, but nearly all of what he said during the debate was false.  Worse yet, he attacked Tim Kaine for reciting the list of foul, racist and misogynistic things that Donald Trump has said and which have been caught on video.  Pence called this enumeration of Trump’s ugliness as an “insult-driven campaign” even though every single thing said by Kaine was true.  Disturbingly, some have said that Kaine was too aggressive, yet totally overlook that almost all of what he said was true in sharp contrast to Pence’s serial lies.  Both Trump and Pence are liars, plain and simple.

But there are other character flaws that disqualify Pence.  For one, Pence’s selection by Donald Trump as his vice presidential running mate ought to be setting of alarm bells among both LGBT Americans and those who believe in the separation of church and state as envisioned by Thomas Jefferson, George Washington, James Monroe and James Madison among the other Founding Fathers.  First on the issue of LGBT rights and equality, here are some of Pence’s past positions which he has never disavowed:

Pence may have come across as calm and controlled during the vice presidential debate, but the man is an religious extremist.  Combine Pence’s religious extremism with Donald Trump’s racism, narcissism, and volatile temperament and one has a truly dangerous mix that threatens constitutional government, existing treaties, and the civil rights of many Americans.

There is still time to stop the cancer that Trump and Pence represent.  Sane, decent and moral Americans need to make sure that they get out and vote on November 8, 2016.  Before that, show your support for the Clinton-Kaine ticket to hopefully sway those on the fence to vote for an inclusive America. Put a Clinton-Kaine yard sign in your yard, put a bumper sticker on your car, and let friends know why you oppose Trump-Pence.  Yes, some friends and acquaintances may be put off, but far too much is at stake to sit home quietly.